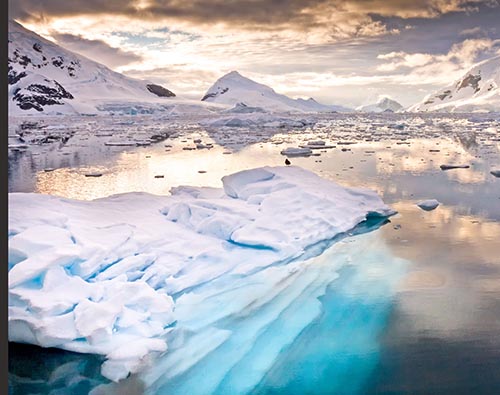 There's an otherworldliness, a surrealness about Antarctica which one cannot anticipate. It is breathtaking and the strangest place you will put your step on. The most pristine place in the face of the earth, it is the final frontier on Earth to be explored. It's a vastness that is mostly unexplored and a dream to every adventure seeker.

One of the things that will strike you about Antarctica is the remoteness. It's mostly empty. It's in the middle of nowhere and nothing is living in sight. The fact that Antarctica doesn’t have an indigenous population makes you and your travel mates about the only people you will encounter. The lack of humans can give you the aura of being on an entirely different planet.

Antarctica was not discovered until 1820 by a Russian expedition, even though it was explored extensively only in the latter half of the 19th century. However, it has been in the history books even before it was discovered. Speculations about a landmass to the south existed since 1 AD. Research continues to the day as Antarctica slowly reveals its secrets to the keen eye. The wildlife of Antarctica consists of seals like leopard seals, antarctic fur seals, different types of penguins like the Adelie, Rockhopper, chinstrap, macaroni, emperor and king penguins; whales, albatross, and orcas.

The best way to get there is via ship or plane from Ushuaia, Argentina. It takes about 48 hours by ship. Another way of getting there is a 2-hour trip via plane from Punta Arenas, Chile to King George Island, from where you can continue your trip to Antarctica via ship. You can find yourself immersed in the exotic fauna using kayaks or Zodiacs, visiting the extremely adventurous Drake Passage, and watching the massive icebergs as you go along.

How to get there:reach the southernmost city of the world, Ushuaia, Argentina via an overnight flight and board an expedition ship to mainland Antarctica.

Landscapes: Drake passage, one of the roughest patches of sea with the convergence of Southern, Pacfiic and Atlantic seas.

Penguins are about the main dwellers of this windy continent. Here's what you need to know about penguins you can find on your trip to Antarctica.

The Adelie penguins can be found in the Ross Sea and Antarctica Peninsula. With a population of 7.5 million, they can be seen most commonly in the Southern regions and the South Shetland Islands. They are famous for their nest-building and brush-tailed behinds.

These small penguins can be spotted in the subantarctic islands and the Antarctic peninsula. They are popular for their looks, mainly because they have yellow and orange crests of feathers called aigrettes.

They can be easily spotted with their yellow and black crest of feathers. As their name suggests, they can be found hopping instead of waddling, around the rocky shoreline of the continent.

As their name suggests, the chinstrap penguins have a black band that looks like something is strapped around their chins. They can be found in October and November in their nest sites, which are usually rocky, ice-free coasts.

They are the most famous penguins. With a population of just 595,000, they are considered a near-threatened species. They are also known for their deep-sea diving skills and the ability to stay under for over 20 minutes. Watch out for the magnificent sight of the emperor penguin leaping up for air.

This penguin is known for its upright posture, vivid colours and long bill, thus the name, King penguin. Watch out for their chicks which are muddy coloured furballs, which interestingly was thought to be a different species of bird.

Another common sight at the southern pole is the Albatross. Famous for its largest wingspan in the world, Albatrosses are a sight to behold. They have a grey head, black-browned and light mantled sooty plumage, usually seen following ships and fishing boats for leftover fish.

You can spot four different types of these majestic creatures, they are leopard, crabeater, Weddell and southern elephant. Humans don’t interest the seals much, except the leopard seal which might turn aggressive to humans.

Orcas or killer whales are the largest members of the dolphin family. They are famous for being extremely social and intelligent. They can be spotted quite frequently in the Ross sea. Studies suggest that four distinct varieties are spotted in the Antarctic waters, make sure to see them all!

The blue whale is the largest animal on the planet. Growing more than 100 feet and weighing more than 120 tons, it would be a story of a lifetime to spot a blue whale on your Antarctic expedition, when it comes during the season of migration.

Here are some of the popular vessels leading expeditions into the last continent.

It is the first polar expedition ship designed especially for fly-cruise operations. It has a capacity of 100 passengers. There is also an array of creature comforts like gym, sauna, library, outdoor barbeque area, and a large observation deck. An Antarctica cruise cost on board this vessel will cost you roughly 5000 USD, which can vary according to your itinerary.

The M/V Ortelius is known as one of the sturdiest ships out there. With the highest ice-class notation, M/V Ortelius can navigate in solid one-year sea ice and multi-layer pack ice. It can accommodate about 100 passengers and is furnished with the essentials only. Antarctica cruise cost aboard this ship can be calculated according to your itinerary.

1. PORT LOCKROY- This is where you will find the famous Penguin Post Office that is currently occupied by a colony of Gentoo penguins. A great way to start your trip to Antarctica!

2. PARADISE BAY- Also known as Paradise Harbour, this site gives excellent views of the icebergs calving off the glacier.

3. PETERMANN ISLAND- Home to a variety of wildlife including penguins, imperial shags, and petrels, this is a popular starting point for your trip to Antarctica.

4. LEMAIRE CHANNEL- This site is already famous for its picturesque scenery. The calm waters and cliffs have been photographed countless times.

WHEN TO GO: (October-March)

OctoberWith Minke, Southern right and Humpback Whales returning to Antarctic waters to feed, along with albatross, petrels and comical blue-eyed shags and landscapes covered in sparkling snow at this time, October is also perfect for photographers as the lengthening days are concluded in beautiful rose colored sunsets.

NovemberNovember is the time to see Antarctica in all its pristine glory. There's romance in the air too as penguins court each other for the mating season.

DecemberDecember, being the peak season, shows you that your trip to Antarctica is filled with the summer light and is teeming with visitors. The eggs start hatching in the penguin rookeries from mid-December and whale sightings become more common as they move into the nutrient-rich waters.

JanuaryAntarctic summers are a magical time to make a trip to Antarctica and may bring you the opportunity to visit the historic sites of Scott and Shackleton’s expedition huts. With 20+ hours of sunlight, January is a good time for travelers concerned about the cold, to make the most out of exploration.

FebruaryFebruary is the time to explore farther south as the summer sun has weakened the ice enough.

MarchThe environment turns green and pink with the booking algae in the water. The penguin chicks are ever more curious to meet visitors.