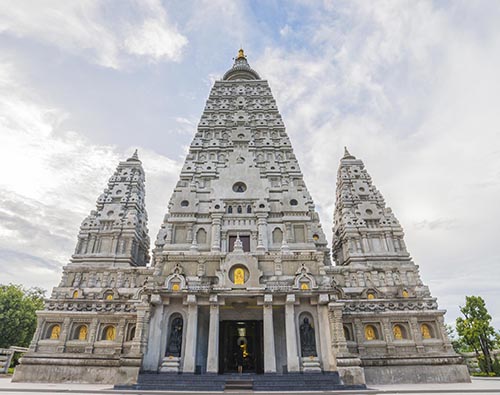 Bodh Gaya is a small town in Bihar. This town is extremely popular amongst Buddhists, and every year many Buddhists take a pilgrimage tour to this place. This is because Gautama Buddha achieved enlightenment in this village under the Bodhi tree (Banyan tree). People from all over the world visit Bodh Gaya India to visit the Mahabodhi temple, Bodhi tree, and other attractions.

Bodh Gaya is situated near the Phalgu river which is a tributary of river Ganges. The place is famous as Gautama Buddha attained enlightenment in this place, sitting under a banyan tree. In the 3rd century BCE, Emperor Ashoka built a small shrine as a sign of respect for Buddha and to mark the spot. Even today, countless tourists and Buddhist pilgrims take a trip to Bodh Gaya, India.

People of Bodh Gaya celebrate the birth and enlightenment of Gautama Buddha during the first full moon night in the month of May. The village is beautifully decorated, and colorful processions take place. Tourists can relish Thai and Tibetan cuisine.

The most commonly spoken languages include Hindi and Magadhi, and some locals speak English. 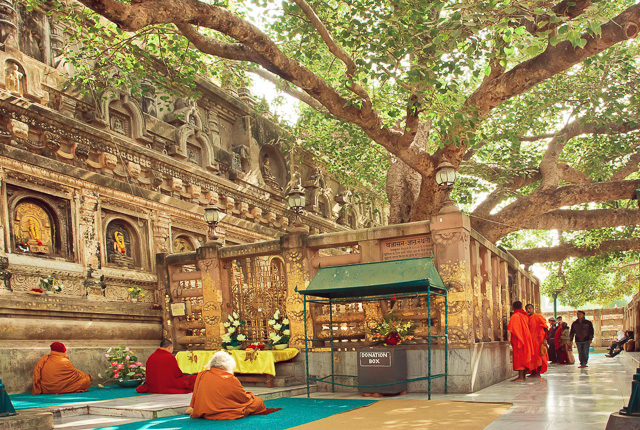 Mahabodhi Temple: This temple is situated in the east of the Bodhi tree. The temple is around 170 feet tall. A huge picture of Buddha after attaining enlightenment is placed inside the temple. The courtyard of the temple is filled with stupas that were built 2500 years ago. The temple offers a peaceful and positive aura to the visitors and pilgrims.

Bodhi tree: The historic and famous Bodhi (Banyan) tree is where Gautama Buddha attained enlightenment 2500 years ago. Buddha meditated under the tree for a week after the enlightenment without moving. The present tree is the 5th descendent of the original Bodhi Tree. The tree still plays a major role in Buddhist culture, traditions, and rituals. This tree is one of the top-visited places in Bodh Gaya, India.

Muchalinda Sarovar: Buddha spent his sixth week meditating near this lake after his enlightenment. While meditating, a severe thunderstorm hit the place, and Buddha was getting drenched. Muchalinda (Kingsnake) came out and sheltered Buddha from the rain and wind.

Vajrasana: Vajrasana (Diamond Throne) was built by Ashoka in the 3rd Century BC. This is the Buddha's enlightenment seat. It is made from a red sandstone slab and is one of the famous tourist attractions.

Sujata Garh: Before getting enlightenment under the Bodhi tree, Buddha was meditating in an ancient stupa. A girl named Sujata offered Buddha rice kheer after seeing him, and Buddha accepted it. After ages of severe fasting, Buddha consumed food, and this place is named after the girl who gave him food.

Indosan Nippon Japanese Temple: This structure is made from wood and is similar to the Japanese shrines. Buddhist communities from around the world helped in building this structure in 1972. There are numerous paintings inside the temple depicting the life story of Buddha. The beautiful architecture and calm environment make it one of the preferred tourist places.

Ratanaghara: Buddha spent the fourth week of meditation in this place. It is also known as the Jewel house. It is said that, during this meditation, his body emitted a ray of six different colors. Buddhists used these colors to make their flag.

Meditation Park: This park has been recently developed solely for meditation. People can come here and meditate peacefully. The lush-green space, fountains, and meditation huts provide an ambient environment for meditation. Tourists visit this place to experience a state of calmness.

Thai Monastery: There are many monasteries in Bodh Gaya India, but the Thai Monastery is considered one of the best because of its beautiful and elegant architecture. The monastery houses a 25-meter tall Buddha made from bronze, and the roof of the temple is filled with golden tiles. This place is apt if a person wishes to take a break from city life. 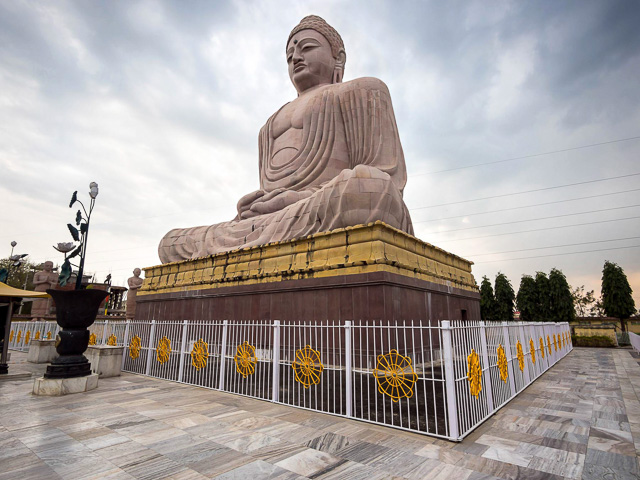 Barabar cave: This cave gives an opportunity to step in the past and explore that time period. People in the olden days used caves as their home and stayed in it during difficult times. There are a total of seven caves and were formed and used in the 3rd Century BCE during the Mauryan era. Some caves are shaped like whales, and some resemble a submerged submarine when viewed from the top. The cave walls have letters and pictures carved on them. Tourists explore these caves to get a taste of ancient times. It is 41km from Bodh Gaya.

Dungeshwari hills: It is also known as Mahakala caves. It is situated along the Phalgu river. It is said that Gautama Buddha spent a few years in these caves. The journey to these hills is filled with beautiful sceneries. The caves house both Hindu temples and Buddhist structures. 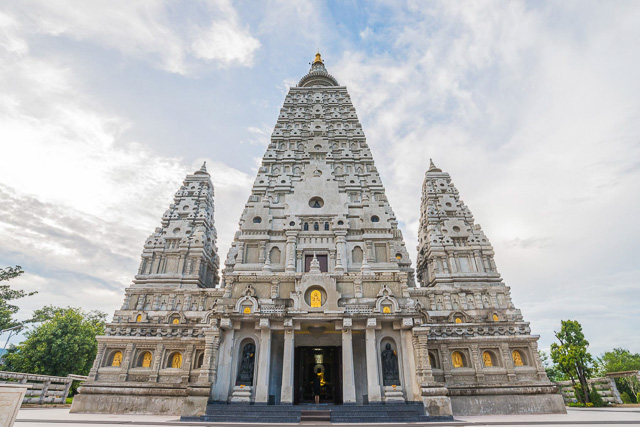 Bodh Gaya Regency Hotel: It is a four-star hotel located near the Japanese temple. It is also located quite near to the Mahabodhi temple. It is easily accessible from both Gaya airport and railway station. The rooms are comfortable, and the hotel has in-house restaurants that serve both Indian and continental cuisines.

Marasa Sarovar Premiere: This hotel is situated on the banks of the river Phalgu, and the architecture resembles ancient Buddhist structures. The hotel has a beautiful interior and also provides glorious views, which is a feast to the eyes. The rooms are very comfortable, and the hotel serves a wide range of cuisines.