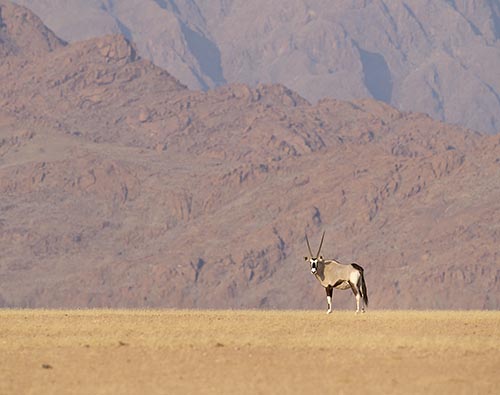 Namibia, located in southern Africa along the Atlantic Coast, has its name derived from the world’s oldest desert, Namib. It literally means a 'vast place'. Namibia is not your traditional “African safari park” though it has the Big Five and much more. The dominant wildlife park here, Etosha national park, is actually a huge salt pan and scrubland which houses a plethora of wildlife in its unique terrain. Another stunner to remember is the sandwich harbour where the vast Namib desert meets the Atlantic ocean, and one can enjoy the same by a 4x4 dune bashing ride or from a plane ride from above. Those interested in hiking have plenty of iconic dunes to choose from, and if you are interested in herping an experienced guide can accompany you to show some unique reptiles of these deserts. Also a Sunrise balloon ride over the dunes is an experience to remember for long. Namibia has also its share of aboriginal tribes like the Himba tribe and many artefacts, bushmen stone paintings etc from thousands of years back in Damaraland.

Namibia can astonish you beyond imagination. From the world’s tallest sand dune, to the grand fish river canyon, to its exotic wildlife in Etosha, to 10,000 year old paintings and civilisation at Damaraland, to the desert meeting Atlantic Ocean, Namibia has more and enough to surprise even the discerning world travellers. Namibia also has some of the finest experiential stays in Africa, which let you stay at the heart of nature, while enjoying your creature comforts. Reach out to our Namibia destination experts today to understand what all you can do in this wonderland, and co-create the perfect trip as per your preferences.

Namibia has broadly three circuits, the wildlife circuit which is primarily Etosha national park and desert elephants of Damaraland. Then there is the desert circuit spanning Sossusvlei and the sandwich harbour/skeleton coast regions and finally the cultural circuit which is essentially Damaraland. We present some of the most popular experiences one can have in Namibia.

The park is a shrubland habitat built around the Etosha Salt Pan (dried bed of a long-extinct lake) which is almost 130kms wide, and it has been even identified from the space. There are various waterholes providing excellent game viewing all through the year. Etosha is one of the best places to see both Black Rhino and White Rhino, also it has a thriving Lion, Leopard, Elephant, Zebra and Giraffe population, which are seen regularly.

Damaraland has some of Namibia's most stunning landscapes, ranging from beautiful rock formations at Spitzkoppe to wild desert mountains in the north to red-rock based Erongo and Brandberg in the south. It is famous for its resident Himba tribes which is an aboriginal tribe of Namibia. Also famous here are the desert (adapted) Elephants which are regularly seen here. It is also home to some of Africa’s finest prehistoric rock engravings and paintings which are claimed to be done by Bushmen.

Aptly named as Skeleton coast, the place is a graveyard for many ships some dating as far back as World War II. But the national park is not just about shipwrecks. It is also home to a variety of flora and fauna, including some endangered species like the cape-fur seals.

This region is part of the Namib-Naukluft national park, and is characterised by tall red colored sand dunes, and houses some of the tallest sand dunes in the world, which are the iconic Dune 45, Big Mama and Big Daddy dunes. It is also home to Deadvlei, which used to be an oasis with several acacia trees, later the river watering the oasis changed its course. All its acacia trees are now dead and blackened, leading to great contrast with the red dunes and the white shiny salty floor. These regions have been backdrops of many movies.

Giant golden sand dunes running into the Atlantic ocean, that is Sandwich harbour for you, Namibia’s iconic location where the desert meets the sea. Whether you bash the dunes in style using a 4x4 land rover or see this spectacle from the skies, it is surely an experience you will remember for your life.

This is a quiet sea facing town, which is also the base for Sandwich harbour day excursions. On the fringes of this town is the famous Dune 7, which is the highest Dune of Namibia at 383m. Around the Dune 7, there is also lagoon bird sanctuary which are few ponds amidst the desert and salt pans, and these house hundreds of flamingos and other desert birds. Another notable experience is the morning boat cruise from walvis bay in search of pelicans, seal colonies and dolphins

It is one of the most popular tourist attractions in Namibia, with it being the largest Canyon in the continent. It is spectacular to look at, with a 100 miles long ravine, which is up to 27 km wide and goes upto 500 metres in depth. Along the canyon runs its namesake, the fish river, which is the longest amongst the inland rivers of Namibia.