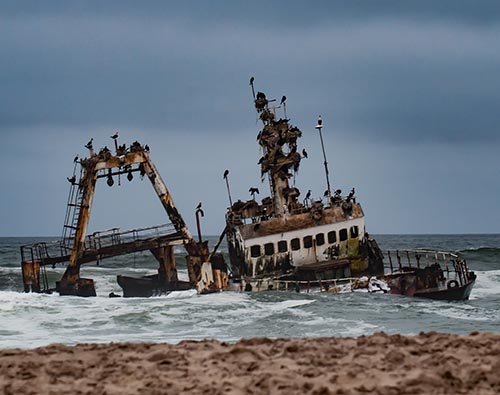 The Skeleton Coast National Park, dotted with wrecked ships is one of the must-visit tourist places in the state of Namibia. The name of the park is right as it is barren and dense fog descends the region. As a matter of fact, the Portuguese travelers called it ‘The Sands of Hell’. Though most of its beaches are inaccessible it is a different experience to visit the place. It was declared a protected region in 1971. The park covers an area of about 1700 sq. km, divided into the northern and the southern sections. The park gives a glimpse of various landscapes like the coast, mountains, canyons, dunes, etc.

The culture at Skeleton Coast is a blend of cultures from 11 different tribes. Languages such as Bantu, Khoisan are spoken in the region and there is also an awareness of the English language. Christianity, Islam, and Judaism are the faiths widely followed. Cassinga Day, Christmas, Africa Day, Heroes day are widely celebrated occasions and theatre and dance form an integral part of the culture. The National Theatre is, in fact, the venue for national and international performances. The dance troupes represent various ethnicities in the region. Wood carvings, basketry are the popular handicrafts of the regions.

The Skeleton Coast beach, Namibia has a unique flora and fauna because of a combination of different geographic and ecological features. Some of the endangered species of the world can be found in the region. The most abundant is the population of Cape-fur seals. Other animals difficult to spot in the region include elephants, hippo, brown hyena, black rhino, lion, leopard, zebra, etc. the vegetation is mostly savannah. Oases can be spotted in this barren land.

The Cape Cross Reserve is the most popular fur seal breeding place. A huge colony of seals can be found lying here. The population of the seals has increased due to the increase in the fish population in the region. More than 10,000 seas can be seen at once here.

Hiking along the Ugabi River is a popular activity. The trail stretches for 50 km passing through the coast and the lichen fields. The visit to the Ugabi River itself is a good way to spend time in the region.

The skeleton coastlines the forest region. The coast is lined with shipwrecks from old and new times also called Namibia shipwrecks. There are ships from World War II which were used to carry supplies from England to Egypt. There are German cargoes and others whose only bones i.e. wrecked ship parts remain and thus the name. The strong winds and suddenly-changing currents combined with the thick fog that surrounds the coast, caused many ships to wreck in the past. The sailors, even if they reached the coast alive, did not have much chance at survival due to harsh weather and the absence of any nearby human settlements.

Himba, Namibia is a small settlement inhabited to date by the Himba tribe. They are a pastoralist tribe that moves according to the season to find grazing grounds for their cattle. They are the last of the few indigenous tribes of the state that remain.

Windhoek is the capital city of Namibia. The city has been well developed and modernized. It resembles the cities of the west and nothing like African cities as one would expect. The city is at an altitude of about 1700mts due to which the climate of the city is pleasant and windy and thus the name. The city is a social, cultural, educational headquarter of the state. The city is the starting point of any tour and one can get the best of accommodation and food here.

The food in the region is as unique as the region itself. People here like to put in extra effort to make the dishes delectable and yummy. The food of the region is highly influenced by South African cuisine. But there are influences of the German and British colonists too. The traditional dishes of the region include PotjieKos which is prepared in a huge three-legged cast-iron pot; Braaivle is popularly known as barbeque has a variety of preparations of meat, chicken, etc. served with salad; Biltong originated in South Africa is a specialty of this region; Kapanaa street food served with peppers, chilies, onions, and sauces.

The nearest airport to the park is the Hosea Kutako International Airport situated near the town of Windhoek. From here a car needs to be taken to reach the Skeleton Coast National Park. The park is accessible by a light aircraft and you can fly over the park for an air safari.