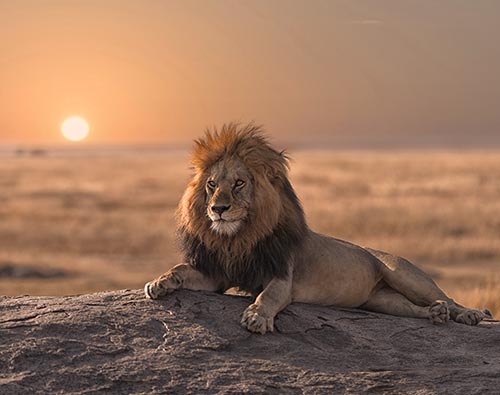 Africa is the original destination for authentic safaris. As several African countries have a flourishing ecosystems, it is tough to choose ideal safari destinations. However, one that is rich in wildlife and equally picturesque is Tanzania. It is no surprise that many choose to enjoy the perfect Tanzania Luxury Safari Tours.

Tanzania is a world-famous country in East Africa. It is famed for its natural scenery, the rich density of wildlife, and unique local tribes. The numerous national parks, reserves, and conservancies are a treat for nature and wildlife enthusiasts. On the other side, the county has pristine waters and soft sands on its coastlines.

Bush or beach trips, Tanzania has everything for everyone. From witnessing lions and leopards up close to seeing lazy sunsets on shorelines. Be the witness to experience amazing wildlife with us in Tanzania all inclusive

Tanzanian tourism options are broadly divided between the wildlife circuit, the beach circuit, and the hiking circuit. Whichever combination of destinations you choose, make sure to get some authentic local experiences and a taste of mouth-watering cuisine. A Tanzania experience cannot be complete unless you have experienced one of the unique experiential stays. Consult our destination experts today to design your ideal Tanzania trip, made to your taste.

Tanzania’s surface area measures precisely 947,300 square kilometers. In comparison, the country is around 1.4 times bigger than Texas, a state in the US. Naturally, this vast land is divided into various areas or circuits that house diverse destinations.

The three main safari circuits include the Northern circuit, Tanzanian Coast and islands, and Southern Tanzania.

The northern circuit is the most well-established and celebrated area of Northern Tanzania. Its national parks, conservancies, and reserves offer world-class safari tours. Here, one can also find the most popular and iconic destinations to discover during Tanzania Luxury Safari Tours.

Serengeti is a large national park and a world heritage site. It spans 14,763 sq. km in an area with flourishing wildlife. The park offers classic African scenery and game viewing can be done all year round.

All major animals such as the African Big Five, big cats, and other plain animals can be seen. In several areas of Serengeti, rivers, forests, and valleys can be found.

The biggest wildlife event, the wildebeest migration, can be witnessed in this national park. Millions of wildebeest, zebras, and other hoofed animals travel from Serengeti to Kenya’s Masai Mara.

During the great migration, the animals have to go through various challenges. These include crossing over crocodile-infested rivers. Predators chasing wildebeests is one of the most exhilarating experiences seen during Tanzania Luxury Safari Tours.

The Ngorongoro crater is the world’s largest inactive caldera. It was formed nearly 2 million years ago as a result of volcanic activity. A huge population of permanently residing animals can be found near the crater. The Big Five are easily spotted during game drives along with other wildlife animals.

The crater displays beautiful sceneries filled with highlands, rightly deserving the title, ‘Garden of Eden’. At the center of the crater lies a soda lake called Lake Magadi. It is one of the unique features of Ngorongoro, frequently seen during safaris. Along the shores of the lake, one can spot diverse avifauna, both endemic and migratory during Tanzania Luxury Safari Tours.

Tarangire derives its name from the River Tarangire that flows through the center of the park. It is a gorgeous photogenic park that is home to an astonishing diversity of wildlife. Moreover, it is known for having a huge concentration of elephants. Tarangire National Park is part of the extended Tarangire-Manyara ecosystem.

The park is famous for its magnificent savannah landscapes, an abundance of Baobab trees, and riverine woodlands. These form natural habitats for various species of birds, animals, and even vegetation. Tree-climbing lions are leopards are a common sight in the park. During the dry season, the Tarangire River attracts migratory animals to its river bed which makes game viewing even more frequent.

The park is well known for tree-climbing lions, wildebeest, elephants, waterbucks, kirk’s dik-dik, and many more. The shallow alkaline water body, Lake Manyara, covers at least two-thirds of the park’s total surface area. It is responsible for hosting huge flocks of flamingos and other wildlife species like hippos that reside in the shallow part of the lake. More than 300 species of birds are also observed near the lake.

Mount Kilimanjaro is a dormant volcano having three volcanic cones. It stands at an elevation of 5,895 meters, making it the highest peak in Africa. Known as the ‘Roof of Africa’, it is part of the seven summits of the world. Kilimanjaro attracts adventure seekers from worldwide to challenge reaching its summit.

Treks and hikes are common on Mount Kilimanjaro. In total, it is a 7 to 8-day return trek to reach the summit and descend down. There are several easy as well as advanced routes for treks.

A one-day hike is also available for those having limited time during their Tanzania Luxury Safari Tours. Mount Kilimanjaro displays spectacular sceneries of Africa along with several animal species that reside in its forests.

Covering only 137 square kilometers of area, Arusha is the smallest park in Tanzania. It is located within a short distance from the city of Arusha, making it an accessible safari destination. The park is dominated by the towering Mount Meru and is rich in topography.

Arusha is noted for housing the world’s largest population of African giraffes. It is also dotted with other unique wildlife species. The park’s landscape includes an open savannah that gives way to acacia scrublands before transforming into lush rainforest. Treks to Mount Meru last for about 4 days and offer travelers a chance to appreciate the park’s wilderness.

Previously known as the Selous Game Reserve, this national park is one of the largest protected areas in Africa. It is twice the size of Serengeti, covering a total area of 54,000 square kilometers. Its vast area offers an unparalleled experience of Tanzania Luxury Safari Tours, where travelers can explore the landscape thoroughly.

The park is divided into two major sections by the largest Tanzanian River – the Rufiji River. It has a high concentration of animal species that are perfect to spot near the park’s water circuits. Furthermore, rare rhinos and endangered wild dogs are also seen in the remote parts of Nyerere.

Ruaha is one of the least visited national parks yet rich in wildlife, making a Tanzania luxury safari feel even more exclusive. The park’s lifeline is the majestic River Ruaha which attracts various wild animals and birds. In the dry season, Ruaha displays its golden savannahs dotted with baobabs and misty hills seen on the horizon.

Waterbucks, gazelles, impalas, and plain animals are always followed by predators near the river’s bank. This serves as an opportunity for travelers to see dramatic chasings in real time. The park is perfect for photographers and birders who want to explore underrated Southern Tanzania.

Zanzibar is an island located in the Indian Ocean, off the coast of Tanzania. It is conveniently located just a few hours away from the country’s capital, Dar es Salaam. The dazzling island is covered by magnificent beaches that have soft white sands and turquoise waters. After multiple days of game drives and other adventurous safari activities, travelers can treat themselves to a beach vacation.

The beaches of this island are unique and have their individual attractive chams. Nungwi Beach is the most popular for water activities. Kendwa and Ushongo beaches appeal to those wanting a tranquil retreat.

Families usually flock over to Kiwengwa beach for its shallow waters that are safe for swimming. It is also a great base to explore the rest of Zanzibar. On the other hand, Misali Island has a vibrant coral reef, perfect for avid scuba divers.

After enjoying the beaches, travelers can wander around Stone Town, rich in traditions and delicacies. There are several museums, galleries, and bazaars that showcase Zanzibar’s culture in the town. Travelers can relish the finest cuisines and stay in the best of the resorts in Zanzibar. Adding this destination to your trip gives a unique spin to your Tanzania Luxury Safari Tours.

Kilimanjaro is not only the tallest mountain in Africa, but it also is the world's highest single-standing mountain. Kilimanjaro is the subject of many ancient legends and folklore. Today hikers from around the world come to hike mount Kilimanjaro, a hike which is done in 7-9 days. It is a slow gradual ascent to reach the summit, and there are comfortable stay options along the way, if not luxury.

While this hike is usually done in just 4 days, this is tougher than Mount Kilimanjaro of its relatively tough ascent. At 4500+ Metres, Mount Meru is also an active volcano.

Tanzania is known for providing the best accommodation choices for travelers. Whether you are in need of villas, classic camps, authentic lodges, or luxurious resorts, Tanzania has it all.

Wild Voyager has partnered up with various experiential properties in Tanzania. Here are some of the accommodation options to consider during a Tanzania Luxury Safari Tours:

Gran Melia – Gran Melia Arusha is a lavish hotel set on 18 acres of coffee and tea plantations. This beautiful hotel offers pure tranquillity and a picturesque view of Mount Meru from its rooms. Gran Melia has all modern amenities and services for guests, from swimming pools to conference facilities.

Chaka Mobile Camp – For the adventurous at heart, nothing beats safaris enjoyed in mobile camps. Chaka Camp is an authentic accommodation choice situated in the heart of Serengeti. It follows the migration of wildebeest in the park. The tented camp is comfortable and offers high-quality services in the middle of the wilderness.

Sanctuary Ngorongoro Crater Camp – This safari camp is located in the Ngorongoro Conservation Area. It sits nearby the rim valley of the crater, allowing easy access to the crater floor. In turn, it results in perfect early-morning game drives. The camp’s classic safari tents come with en-suite facilities.

andBeyond Mnemba Island – A peaceful hideaway, Beyond Mnemba Island has 12 chic beachside bandas. They are connected to the breathtaking Mnemba atoll. The bandas open up to white sands and pine forests. The thatched dining, as well as sitting and bar areas, flaunt vistas of the beach.

Wild Voyager designs exciting itineraries for your Tanzania Luxury Safari Tours, based on your preferences and budget. Moreover, we also make sure that our Tanzania all inclusive includes comfortable accommodations and picturesque attractions. Book your very own Tanzania luxury safari today with the help of our local destination experts.