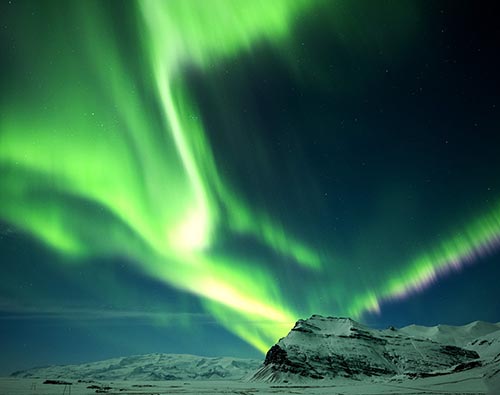 If ever there is an objective assessment of the most beautiful countries on this planet, Iceland will surely rank amongst the top 5, or even on the top possibly. There are beautiful countries, and then there is Iceland. It embodies all the possible contrasts of nature, green during summers and white during winters, large glaciers on one side and frozen ice on beaches on the other side, beautiful waterfalls on one side and volcanic activities on the other side, beautiful green fjords on one side and black beaches on other side, second windiest place on planet but also famous for its northern lights, the list is endless. Iceland is an experience that must be lived at least once in your lifetime.

One of the most splendid waterfalls of Iceland, the Skogafoss Waterfalls are heavenly and will keep you staring at it in wonder the first time you see it. The magnificent waters plunge from a height of 60m crashing into the pool below and forming sometimes double rainbows that arch against its breathtaking backdrop. Situated on the Skoga River in the south of Iceland the Skogafoss Falls is one of the biggest and best waterfalls in Iceland with a width of 15 meters.

Blue Lagoon, Iceland is one of the world’s most popular geothermal spas located in southwest Iceland on the Reykjanes Peninsula. Unlike common perception, the lagoon is a man-made feature whose water is supplied by the Svartsengi geothermal power station. It covers a massive area of 8700 sq. m today, after it has been continuously renovated to include larger areas as well as develop better tourist amenities and facilities, like cafes, hotels, shops selling skin products and so on.

Hailed as the best day tour in Iceland, the Golden Circle is perfect for those who are short on time and yet do not want to be left out on witnessing Iceland’s most stunning features. The three most important stops on this tour are the Thingvellir National Park, Geysir Geothermal Area, and Gullfoss Waterfall.

The Godafoss Waterfall, Iceland or the Waterfall of the Gods is one of the most impressive waterfalls of Iceland. Located in the northeastern region the fall is fed from the Skjalfandafljot River and falls from a height of 12 meters spread across a width of 30 meters.

Jokulsarlon is a beautiful glacial lagoon formed from the famous Vatnajokull glacier, the lagoon is laced with many icebergs and makes a beautiful spot to see the northern lights. On the opposite side of the road, you see the Diamond beach, which is essentially a black beach laced with frozen chunks of crystal ice which shine like diamonds during Sunrise. Together these two places make for a nice day journey.