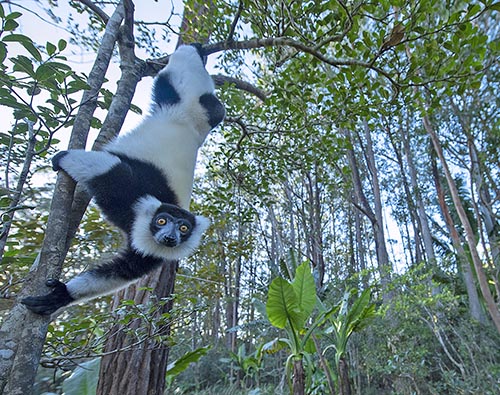 The island nation of Madagascar located off the south-east coast of Africa is the world’s fifth largest island and an ecological wonder. Due to the earth’s tectonic movements, Madagascar was once part of the supercontinent of Gondwana and broke away from Africa about 160 million years ago. It also lost contact with Australia, Antarctica and finally India 88 million years ago, making it an isolated breeding ground resulting in around 90% of its plant and animal species being endemic.

Classified as a biodiversity hotspot by the Conservation International and also considered as ‘megadiverse’, Madagascar with its exclusive wildlife, astonishing inhabitants including birds and its amazingly diverse landscapes can easily be touted as a paradise for nature lovers. Madagascar is the only home to about 105 species of Lemurs, which are a kind of primates similar to Monkeys but very distinct in appearance. Madagascar is also home to a wide variety of reptiles and amphibians and for someone interested in herping, Madagascar is a treasure trove. Most of the Lemur and reptile watching happens by short guided walks. Madagascar is also a breeding ground for huge populations of Humpback whales. Wildlife apart, Madagascar has many vibrant and pristine beaches laced with experiential beach stays. Madagascar has a very relaxed pace of life and an old world charm, which you will not find in any other East African or South African country. Even the way wildlife is experienced in Madagascar is very different from mainland Africa, where jeep safari is the dominant mode. One of the unique Madagascar experiences you can have is staying at a private island with native wildlife in the island. Last but not the least, the food and particularly the seafood is to die for! Talk to our destination experts today to find out more and design an unique Madagascar plan for you.

Here are some top destinations to visit in Madagascar. Any plan of Madagascar is always recommended to be easy paced, so that you get sufficient time to enjoy nature and are not rushed around between park to park. The roads are not very good, so we always recommend flying when shuttling from one region of Madagascar to another. Each of the regions have some unique natural treasures to savour.

It is the nearest national park from the capital city of Antananarivo. This rainforest is home to 11 Lemur species including Lemur species like the Ring Tailed Lemur, Diademed sifaka and Indri Indri, which is the biggest species of Lemur.

It is one of the six national parks of Madagascar which are part of the UNESCO World heritage site rainforests of Atsinanana. The park is famous for its Lemur and reptile population, and the only way to experience the wildlife is by walking trails with an experienced guide.

This is a dramatic landscape carved by colossal monoliths and fossil deposits. Declared as a world heritage site by UNESCO, this place is a paradise for hikers and rock climbers.

The channel between Madagascar mainland and Nosy Boraha is famous for whale watching. From Antarctica, huge groups of Humpback whales migrate to this breeding ground. They breed and give birth to the young here before heading to colder waters.

Near the western town of Morondava, lies the avenue of Baobabs. This is a dirt road where Baobab trees are symmetrically lined up on both sides of the road. These trees are 30m in height and have an unique mushroom kind of an appearance, making this place very popular with international tourists. During Sunset this place just looks magical.

It is a privately managed reserve, near to Morondava with a dry deciduous tree ecosystem. It is particularly famous for its giant jumping rat. This apart it houses 7 species of lemurs and several endemic reptiles, and a treat to visit for any wildlife connoisseur.