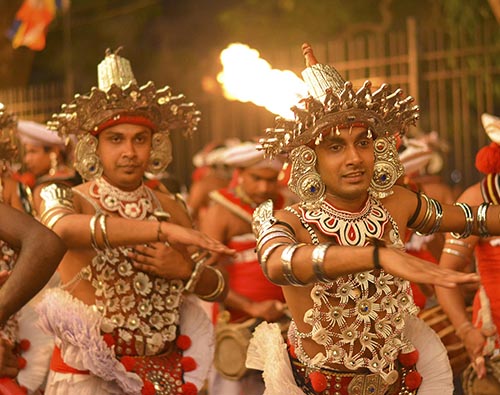 This tiny island nation poised perfectly in the Indian Ocean though small in size is no lesser when compared to the natural beauty and wildlife that abounds here in plenty. Surrounded by water on all sides it acts as an excellent habitat for marine ecosystems that flourish here with panache. The rainforest existing in some regions to the arid plains in others, Sri Lanka is also the land of highlands and mystifying beaches. With 103 rivers that cut across the island and give rise to numerous gorgeous waterfalls, it is also home to several lagoons and estuaries that act as ideal breeding grounds for a large variety of flora and fauna. The mangrove ecosystem thrives along its coastal regions, which along with its tropical and warm climate generates and sustains enviable biodiversity.

If you are planning to visit Sri Lanka you should know, the history and culture of the country date back to over 2500 years. Heavily influenced by Buddhism and Hinduism, the traditions are primarily of the Sinhalese with a large population of Tamil migrants. The country has been through a civil war in recent times and the unrest has in many ways affected the forests and the wildlife. However, that was nearly a decade ago and Sri Lanka is back on its feet, hosting and boasting of tourism, wildlife, and welcoming people.

Dambulla, located in the Matale District is popular for the Dambulla Cave Temple which is a UNESCO World Heritage site. It is a holy place for Buddhists and is visited by a large number of pilgrims every year. It is a must-visit for anyone on a Sri Lanka vacation.

Ella is your ideal tropical relaxation place. It has a few small nature walks in short distances to popular spots like Ella Rock, Little Adam’s peak, Nine arch bridge, Diyaluma falls and Lipton seats. It is the ideal destination to take a relaxing break in between your Sri Lanka trip.

Galle is the capital of the South Province of Sri Lanka. It is famous for the Galle Fort which is also a World Heritage Site. The city shares a long history and has been declared as an Archaeological Reserve. The city was ruled by different rulers throughout the history of Sri Lanka, which is visible in its rich architectural heritage. After being captured by the Portuguese in 1587, it was known as Point de Galle. Later in 1640, it was conquered by the Dutch. Most of the buildings built during that time still show the influence of Dutch architecture.

Kandy is a city of historical and religious importance in Sri Lanka. In ancient times, it was the capital of Sri Lanka and the seat of administrative and religious heads during different dynasties. Today Kandy is the second-largest city in the country and a must-visit part of all Sri Lanka vacation packages for the unique mix it offers of history and contemporary Sri Lanka. There are many museums and parks to visit here.

Located in southwest Sri Lanka, the Sinharaja Forest or ‘Lion Kingdom’, is probably the last remaining dense rainforest which holds a wealth of biodiversity. It serves as a reserve for endangered species of Sri Lanka’s wildlife, avians, and flora. The terrain is rugged with ridges and valleys cut by numerous streams and is a mandatory stop for a wildlife lover’s Sri Lanka tour package.