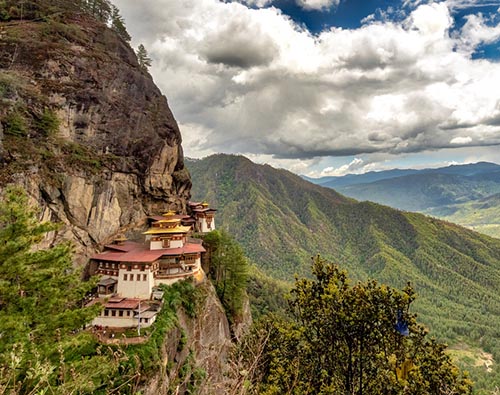 This landlocked nation recently gained popularity when its monarch forced its people into democracy and gave the world a new index to rank themselves - The Gross National Happiness. It was also one of the first nations to be declared carbon negative and still gives importance to sustainability and ecological conservation above business profitability.

Bhutan is as much blessed with the natural beauty of the Himalayas as it is with a rich culture and tradition. The Dzongs (old fortress, now Buddhist temple + administrative office complex) spread across Bhutan, the different monasteries and the abundant natural beauty transfixes anyone visiting here. The different himalayan passes and rivers can mesmerise even the most seasoned traveler. For bird watchers around the world, Bhutan is a revered place for its sheer diversity of himalayan birds. Bhutanese cuisine is also a unique experience for every culinary explorer, and if you are lucky, you might just witness a group of Bhutanese men practicing archery on your way across Bhutan. Whatever be your mojo in life, Bhutan has something for you!

Thimphu is the capital city of Bhutan and also the seat of its government. An essential stop in all Bhutan tour packages Thimphu is a place that will give you a peek into modern Bhutan and historical Bhutan at the same time. The Thimpu Dzong, Memorial Chorten, Buddha Dordenma (Seated Buddha atop a hill) are some of the places to see here.

Paro is the international air hub of Bhutan and is a beautiful city nestled in the himalayas. The famous Tiger’s nest is close by, and Paro is also a gateway to the pristine beauty of Bhutanese Himalayan mountains. It is also a culinary hub of Bhutan and boasts of some of the most luxury stays in the country.

Taktsang is one of the holiest places for Bhutanese. It is said to be the place where Guru Padmasambhava arrived from Tibet on a Flying Tigress and meditated here. The mystical white monastery sits atop a steep 3000 ft cliff, usually surrounded by clouds giving it a heavenly appearance. This is a recommended inclusion in most itineraries to Bhutan.

The old capital of the Bhutan Monarchy, it is an essential trip in Bhutan tours, replete with old Bhutanese houses and beautiful scenery. The Punakha Dzong is one of the most richly adorned royal buildings you will ever see in the world.

The valley, located about an hour’s drive from Punakha mesmerises visitors with their natural beauty. The landscape here changes color with changing seasons and white winters and colorful spring are some of the most magical sights you will ever see.

The most populous city in Bhutan, it is also the gateway to Bhutan for all travelers arriving by road from India. While it is an important economic center of Bhutan, the outskirts of this busy town are breathtakingly beautiful and open up your door to the mighty Himalayas.