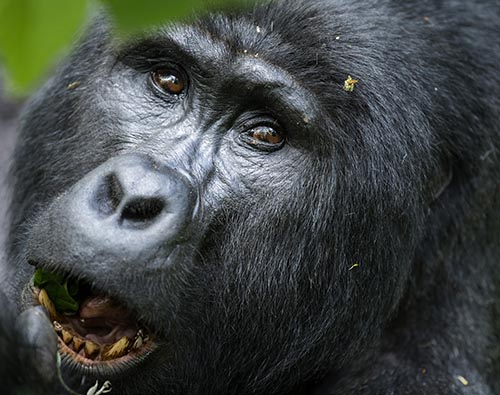 Bwindi is a rainforest located on the edge of the Albertine Rift Valley. The terrain consisting of rifts and valleys is covered with dense and impenetrable forests. Bwindi is rich in its flora, home to ten unique tree species that cannot be found anywhere else in the world. Bwindi supports 820 mountain gorillas which are estimated to be more than half of the world's population. The gorilla trekking Bwindi impenetrable forest attracts many guests each year. Bwindi Impenetrable National Park is situated along the Great Rift Valley. The rainforests are spread over rifts and valleys. This is one of Africa's oldest parklands dating back to many centuries. Swamp forests and Bamboo provide an ideal environment for the gorilla population.

How to reach: by road from Entebbe or chartered flights

Months open: All year except April-May

Best time to Visit: Dec to Feb; June to Aug

Bwindi Impenetrable National Park is an abode to 400 species of plants, more than 400 mountain gorillas which contribute to half of the world's population thereby being the best gorilla trekking destination. Mountain gorilla trekking is considered a popular activity by visitors. The national park also provides shelter to several mammals, including antelopes, elephants, baboons, and chimpanzees. There are many species of birds, 350 to be precise that reside in the national park as well such as including 23 airline rift endemics.

The main attraction of the Bwindi Impenetrable National Park is the mountain gorillas. Most of its population is found here making it the best gorilla trekking zone. You can rarely spot an elephant here but mostly encounter the bushbuck. Bwindi is home to most threatened animals as well some primary species include the black and white Columbus, the chimpanzee, and the L'Hoest's monkey. Bwindi is home to over 300 species of butterflies as well. The best time to visit this place is between June to August and December to January as these months experience lesser rainfall. Therefore, it's best to consider going during these months.

Dwelling beside the Bwindi Impenetrable National Park for thousands of years is the Batwa tribe. They are also known as "the keepers of the forest." The hike starts with a hike through the Batwa settlement. Observe how women prepare their food and engage with the men to learn the medicinal properties of the flora and fauna. Engage with the tribe to hear ancient stories and songs. The Batwa are known to have a symbiotic relationship with the rest of the world. Engage with them to reveal the traditions and heritage of the world. Today there are very few members of the Batwa tribe present.

Gorilla Forest Camp: The Gorilla Forest Camp is located on the boundaries of the Bwindi Impenetrable National Park. This place is ideal for resting after a long day of mountain gorilla trekking. Recently refurbished, the camp provides a luxurious stay for all visitors.