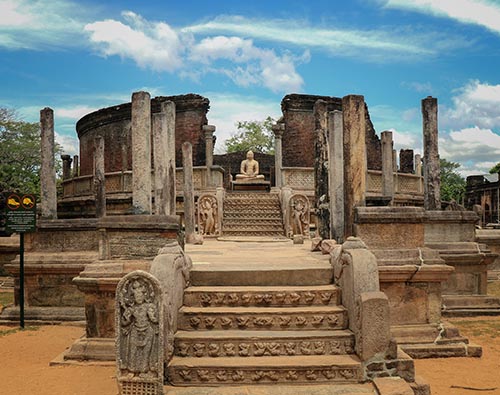 Located at 216 km northeast of Colombo, Polonnaruwa was the medieval capital of Sri Lanka during the 11th-12th century AD. It is a well-preserved ancient city with dagobas, moonstones, massive buildings, beautiful parks, and stunning statues. Some of the memorable sights of the city include the Lotus Bath, the Lanka Thilaka Viharaya, the statue of one of Polonnaruwa’s great kings, Parakramabahu, the Gal Viharaya (rock temple), The majestic King’s Council Chamber, and many more places of great historical significance. The Sea of Parakrama is a vast man-made reservoir that was built in the 12th century in Polonnaruwa Sri Lanka.

Polonnaruwa Sri Lanka has two parts- an old town and a new town. The ruins of the city are divided into five different groups. Each group consists of ruins from different reigns under different erstwhile rulers of the region. The Minneriya Lake is a wide expanse of water bordered by grasslands and woods, on the low foothills of the Matale range. Polonnaruwa Sri Lanka is home to some of the country’s greatest works of art and architecture. With its beautiful flora and fauna combined with historical works of art and architecture, this is one of the must-visit places for tourists in Sri Lanka. Polonnaruwa Sri Lanka is ideal for tourists who want to visit a place rich in history and in natural beauty at the same time.

The Royal Palace, The Shiva Devale No. 2, The Audience Hall, The Sacred Quadrangle, The Swimming Pool, The Dagaba Kiri Vihara, The Rankot Vihara

The Buddha statue at Lankatilaka,

Polonnaruwa Sri Lanka has a rich history. The South Indian Chola were the first invaders to make Polonnaruwa their stronghold. However, in 1073, King Vijaybahu I recaptured the throne for the Singhalese. For the next 153 years, his dynasty ruled the region. During the reign of Parakramabahu I, the city rose to great heights in a glorious renaissance of art and culture. Many beautiful monuments and sculptures were built during this time including the Parakrama Samudra which is a 6000-acre water reservoir near the city, the magnificent 7-storeyed palace, the Prince’s bathing pool, which still has one of the crocodile mouths spouts, and the audience hall with an amazing frieze of elephants. He was succeeded by Nissanka Malla. Polonnaruwa was abandoned to the jungles during the 13th century after almost a century of efforts to hold back invaders. Anuradhapura is the new settlement located away from the ancient town. The unique history of the place is portrayed at a museum in the city, near the rest houses. 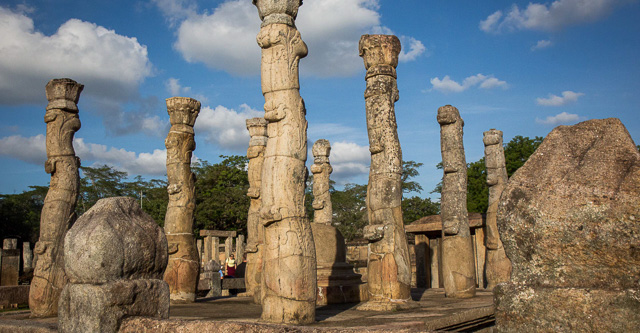 The Royal Palace: This is the first group of ruins. It took seven years and seven months to complete and consists of 7 stories having 1000 rooms.

The Shiva Devale No. 2: One of the oldest buildings in Polonnaruwa Sri Lanka, the Shiva Devale No. 2 is built entirely out of stone. It remains almost as it was when it was built. Lord Shiva’s mount and Nandi the bull are the important structures within the building.

The Audience Hall: With beautiful elephant carvings alongside each of its walls, the Audience Hall is one of the most impressive monuments. The entrance to the hall is marked with magnificent steps with majestic lions at the top on each side.

The Sacred Quadrangle: This is a representation of the grandest architecture of the Ancient city of Polonnaruwa. It is surrounded by four large Buddha statues. 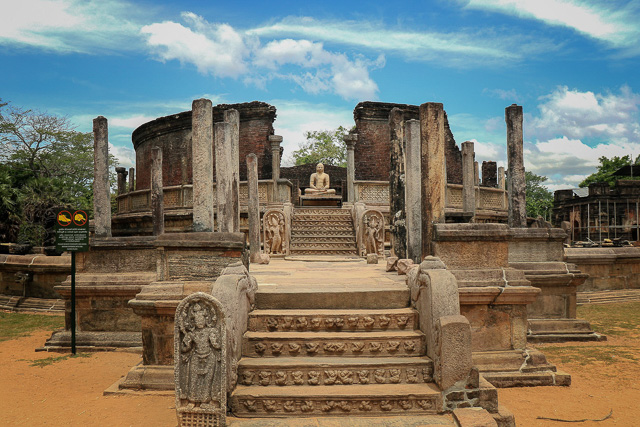 The Swimming Pool: It is situated at the corner of the Palace grounds and is one of the main attractions of the city. It consists of crocodile-mouth spouts that direct freshwater into the pool.

The Dagaba Kiri Vihara: It was built by a queen of Parakramabahu and the original lime plaster is in perfect white condition even after almost 700 years of it being created.

The Pabalu Vehera: This is the third-largest dagaba in the ancient city and is still in excellent condition. It was built by a consort of king Parakramabahu and numerous glass beads were found at this site at the time of excavation. That is why it was named Pabalu, which means beads.

The Buddha statue at Lankatilaka: It is one of the most emblematic structures of the ancient kingdom. The height of the Buddha statue is almost over 14 m and it was built by King Parakramabahu. 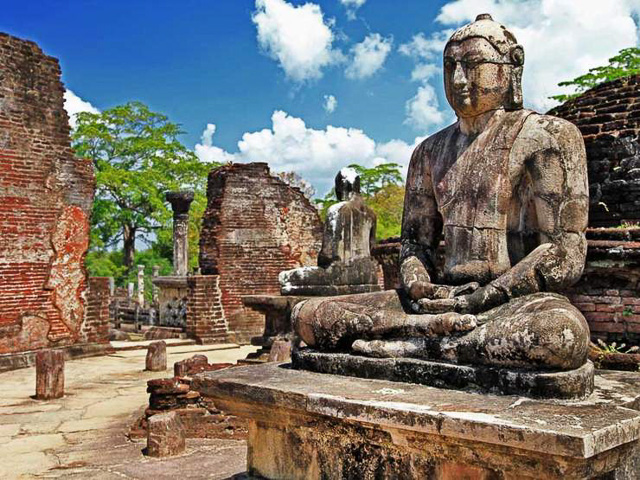 Lord Buddha figures at Gal Vihara: This specimen of Lord Buddha statue created entirely with solid stone is a UNESCO World Heritage Site. It was built during the reign of King Parakramabahu.

The Rankot Vihara: It was created by Nisanka Malla keeping in mind the old traditions of the Anuradhapura Maha Viharaya. It is about 54 meters in height and it was known as “Ruwanweli” according to the inscriptions found near the Stupa.

Polonnaruwa Tank: This ancient reservoir of water is among the many tanks in Polonnaruwa Sri Lanka. It is a beautiful place for sightseeing. 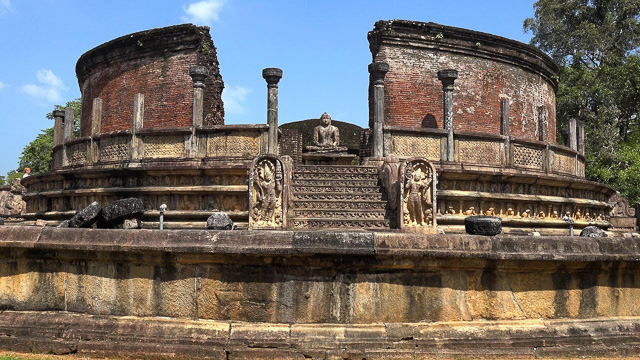 Minneriya National Park: The Minneriya National Park is known for its exclusive safaris to view the exotic elephants and other varieties of wildlife. There are numerous activities in the morning and in the evening. Tourists can view a large variety of wildlife like the extremely rare grey slender loris, crocodiles, and the like. During August, September, or October, tourists can watch congregations named “Elephant Gathering”.

Sigiriya: Sigiriya is home to the Sigiriya Rock Fortress which is a UNESCO World Heritage Site and is known as the 8th wonder of the world. It is one of Sri Lanka’s most dramatic sights. It contains remnants of an ancient civilization. Enjoy wholesome meals with majestic views at Sigiriya. 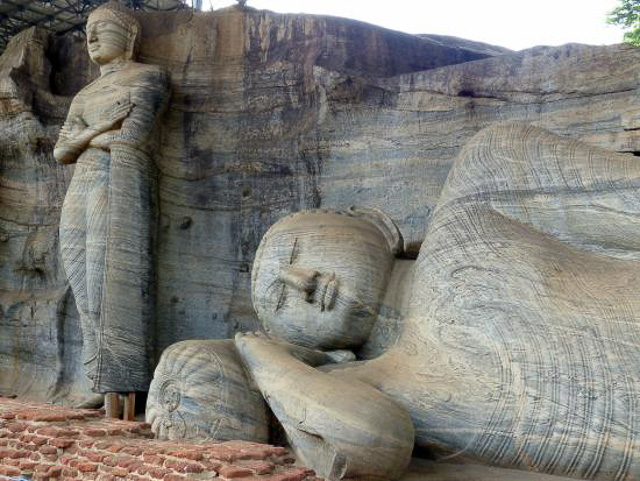 One of the best ways of exploring Polonnaruwa Sri Lanka is by cycling. The Polonnaruwa countryside cycling tour offers the best views of beautiful landscapes and colorful wildlife. Tourists can take a canoe ride up Parakrama Samudra with some local friendly fishermen who might teach you some tricks of their trade.