Being a UNESCO Heritage Site, Galle is the jewel of Sri Lanka. The historic city has been a magnet for European and later, British conquests. As such, Galle is embellished with imposing and impressive buildings and structures that range from Portuguese to Dutch to British origins. This history is preserved and exhibited in the National Museum and the Maritime Museum.

The Galle fort forms the core of the city and the place where one can witness the change of power among the Europeans and the British. The fort houses a lighthouse, built by the British, and the clock tower that the locals pitched in to build. Yet another piece of British legacy in the city is the Old Gate outside the fort with its carved coat of arms.

Aside from the fort, Galle is home to stunning beaches, surrounding the city. Some of the best beaches to visit in the city are Mihiripenna, Sahana, and Utawana beaches. A walk around the city will reveal quaint little cafes, quirky boutiques, and flawlessly restored and fort mansions-turned hotels. Perched on top of a hill, the Japanese Peace Pagoda is a place of serenity while offering a stunning ocean view. The St. Joseph's Chapel and St. Mary's Cathedral are yet another tourist spot known for its serene atmosphere. With its ambiance and blended culture and history, Galle is an unmissable destination in Southern Sri Lanka.

Best time to visit:December to April

The Galle Fort also known as the Galle Dutch Fort is one of the most attractive places to visit in Sri Lanka. It was built by the Dutch in the 18th century and is now designated by UNESCO as a World Heritage Site. The fort is surrounded by thick ramparts along which tourists can walk and enjoy the architecture. The place is also great to enjoy sunsets.

The Galle Lighthouse was built by the British and not by the Dutch. It was built in 1939 and is 18 meters high. The lighthouse can be easily recognized from the Fort and is located on the eastern end of the walls of the Fort. Surrounded by palm trees, the place is perfect for sightseeing and clicking photos for your trip. The ambiance is quite pleasant and you can enjoy beautiful views of sunsets from here.

The Dutch Reformed Church is in the interior of the Galle Dutch Fort. It is also known as the Groote Kerk. It was built in 1640 and later renovated in 1755. The church is paved with gravestones from the Dutch cemeteries and also has a beautiful garden. It is a fine example of the beautiful Dutch architecture in Sri Lanka.

The Historical Mansion Museum is considered as the paradise for the people who admire history and love collecting antiques from the ancient eras. The museum is located on Leyn Baan Street inside the fort. It holds different pieces of arts and traditional crafts and also has a shop to purchase the artifacts.

It is a Buddhist temple. The building is really beautiful and the view from the place is quite pleasant.

The mosque is located in the Arab Quarter of the fort. It was constructed in 1750 and renovated in the 20th century. The construction reflects the British and Islamic detail of architecture and manifests a splendor view. It faces the lighthouse and is very well maintained.

One of the oldest buildings in the Galle Fort is the Dutch Hospital. It dates back to the 18th century to the Dutch era. The place was constructed for the officers serving under the Dutch. It is now restored as a public place for shopping and eating.

It is a museum in the Galle Fort. It shows the history of Sri Lanka with the ocean. The skeleton of a Byrd’s whale is one of the major attractions here. The place also shows the structures of many boats and has many artifacts explaining the science behind a tsunami and demonstrating old fishing techniques.

Galle gained prominence in the 16th century with the arrival of Portuguese, who built the first Galle fort during their periodic dispute with the Kandy kingdom. Later, the Dutch took over the city and the fort and modified it with sea-facing walls while building a city within these walls. During this period, Galle was the main port of Sri Lanka until Columbo took the spot. In 1796, Galle was conquered by the British, who further modified the fort and built houses and a lighthouse within.

Having been conquered by different ethnicities over several years, the culture of Galle is blended with a predominant influence of the Dutch. Galle's history makes it a spot for antique and spice shopping with a cuisine that is a mix of traditional Sri Lankan and European. 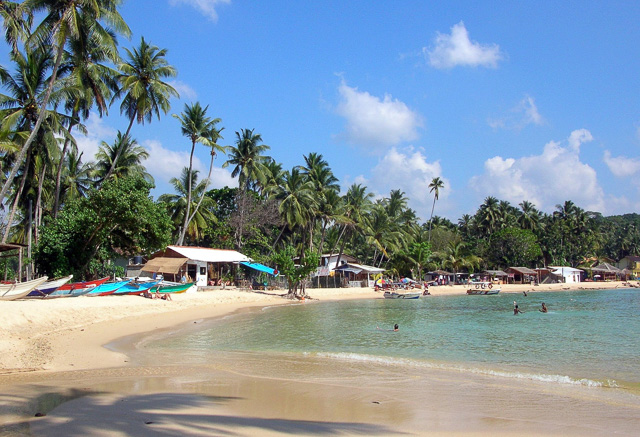 The Dutch Fort is the chief attraction in Galle. Walking around the Galle Fort is a great way to spend a fine morning. Being the largest remaining European fortress in Asia, the fort attracts a lot of tourists every year. In the fort area, you will meet several salesmen selling everything from silver doilies to linen lace.

Originally built by an army officer serving the Dutch, the Dutch Reformed Church has a pipe organ with a manual bellow inside that can no longer be used. A live-in the caretaker will show you to the underground tunnels to the Governor's House. Located next to the New Oriental Hotel, the church is a must-visit in Galle.

The National Museum of Galle

The National Museum of Galle Sri Lanka is a treat to history buffs where one can learn the influence of the Dutch in the country. With several displays of shells, masks, wooden carvings, Beeralu collections, and archeological artifacts, the museum tells a tale of Sri Lanka from the 4th century. 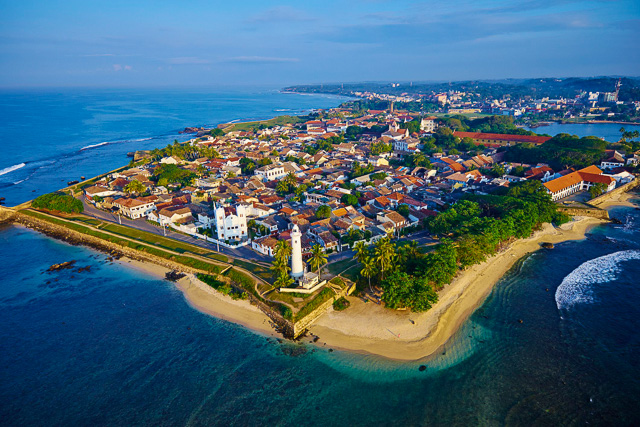 For those looking for a place for some introspection, the Japanese Peace Pagoda is the place to go. Perched on top of the Rumassala Hill, the Pagoda offers a breathtaking view of the expansive ocean and the thick jungles. Attend the Pagoda's daily ritual at 5:30 PM for a deeper dip into the pool of composure.

Situated outside the Galle Fort, the Old Gate is yet another remnant of the British time in Galle. On the top of the gate, one will see the carved coat of arms with VOC (Verenigde Oostindische Compagnie) and 1699, marking the year in which it was made.

Located in the Galle Fort campus, the clock tower has a great history that a guide will narrate. The tower was built as a dedication to Peter Daniel Anthonisz-- a humanitarian doctor-- after the residents of the city pitched in money. The structure overlooks the Moon Bastion, which was once a guard's room.

The Maritime Museum will take one back in time to the trade routes and relics of the Dutch East India Company. Known for its sea trade and commerce, Galle and the Sri Lankan harbor have faced several attacks in the past, the evidence of which can be seen in this museum.

Standing 18 m tall on the eastern end of the fortress walls, the Galle lighthouse is a popular tourist attraction. Contrary to most attractions in Galle, the lighthouse was built by the British and not the Dutch. With the lighthouse keeper's permission, one can get the stunning view of the seas and the land.

St. Joseph's Chapel is a testament to the Roman Catholics of the Portuguese times in the city, later revived by the Dutch. As such, you will see a hint of the Dutch architectural style in the small chapel that oozes serenity and peace.

Titled as the landmark of Galle Sri Lanka, St. Mary's Cathedral is a place of prayer for the Roman Catholic Diocese. The church prays to the Virgin Mary and is visited by the Catholics living in southern Sri Lanka. The beautiful structure and a serene atmosphere attract several tourists to the cathedral every year.

Situated on the southwestern tip of Sri Lanka, Galle is home to several beaches that are perfect for those craving to play with the ocean. One can choose to go to one of Mihiripenna, Bonavista, Lighthouse, Sahana, Pitiwella, Unawatuna, and Koggala beaches. 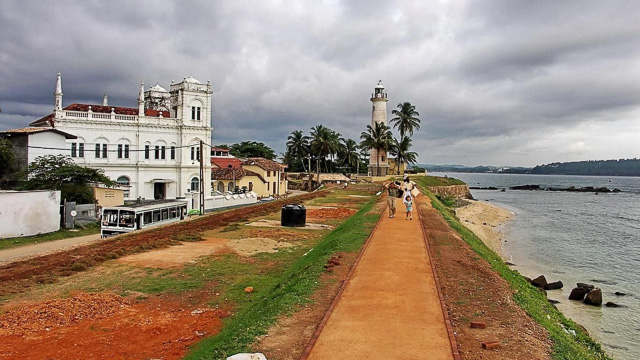 A day trip from Galle Sri Lanka to Bentota city is a must. Here one will visit the house of one of the most famous architects in the country-- Lunuganga Estate. At Bentota, one can also visit the free-range fish massage parlor and a chance to buy fresh cinnamon from where it is harvested.

The Madu River Safari and the Turtle Hatchery visit at the south coast are two most unique experiences at Galle. Enjoy the relaxing boat ride across the Madu river through the mangroves and learn about the sea turtle and hold them at the touch pools at the Turtle Hatchery. 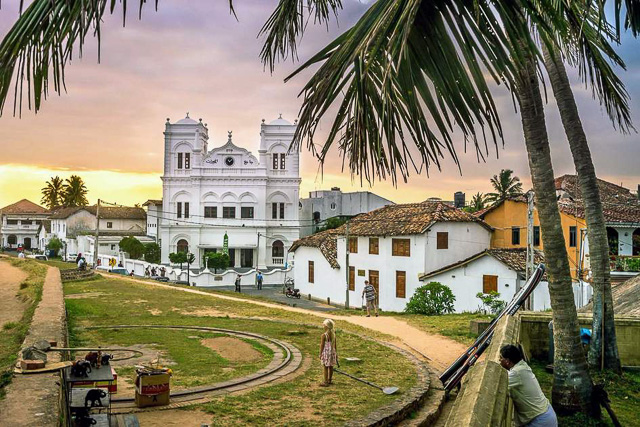 Galle Amari is a prime choice of accommodation, located within the rainforests. Tourists can enjoy the charm of boutique hotels at the Galle Fort Hotel and Kahanda Kanda. Revel in luxury with the 5-star Hotel Tri and The Fortress Resort & Spa. Jetwing Lighthouse hotel located on a hillock offers a stunning view of the Indian Ocean. Step into a different time in history at the Taru Villas and Amangalla.