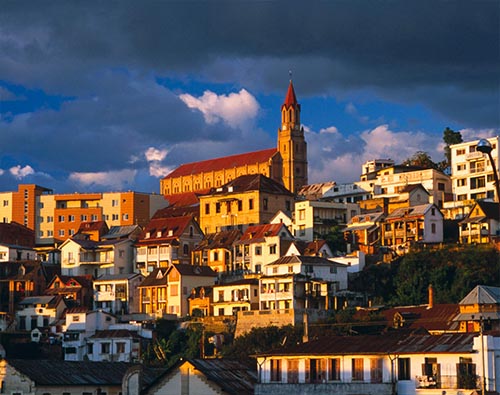 Antananarivo also fondly called Tana is a historically rich city cognizant of its arts and galleries and bundled in the usual hustle and metropolitan life nation of Madagascar, Antananarivo Madagascar is situated along the central highlands and acts as the perfect first step to venture into other attractions and adventures. However, having said that, Antananarivo on its own merits a visit for its fantastic historical architecture, its wildlife spots, the restaurants that offer traditional Malagasy cuisine, the overflowing markets, and the local crafts and cultures.

Get close to nature at Croc Farm

The Rova Palace complex is perhaps the most iconic monument of the city that quite literally towers over the town. Home to the rulers of the Kingdom of Imerina and the Kingdom of Madagascar the palace was in use till the 19th century. Badly damaged by a fire in 1995 the palace still holds magnificent architectural treasures in the stone shells and statues and chapels that remain. Designed for Queen Ranavalona I the Rova is the final resting place of its greatest kings, with tombs of royalty in one section of the palace area. Perched atop the hill the Rova can be seen from anywhere in the city.

Rainilaiarivony’s Palace, the residence of Prime Minister Rainilaiarivony in the 19th century currently contains the Musee Andafiavaratra, the museum that is home to the artefacts from the ruins of the Rova in the 1995 fire. The museum displays the royal portraits and gifts of the Imerina kings as well as has a collection of paintings and objects of ethnic tribes.

The Musee d’art et d’archeologie in Isoraka neighbourhood built-in 1970 is a treasure of Madagascar’s archaeological and ethnic history. With a fantastic collection of objects that represent Madagascar’s various tribes and ethnic groups including an insight into their culture such as, talismans and grave decorations this museum is a great way to understand the history and traditions of the nation since the 1st century.

Ambohimanga is the hill that once was the spiritual centre of the Imerina kingdom. This fortified settlement and walled villages include graves of the royalty and is considered a religious site, with pilgrims from all over the country making their way here.

The Catholic Cathedral of Andohalo is a magnificent Gothic rosette-shaped window. Its outer façade is often compared to the iconic Notre-Dame in Paris.

The Croc Farm and Lemur’s Park are must-visits. The Lemur’s Park is home to nine lemur species, such as the crowned sifaka and bamboo lemur. One can catch sight of these primates at close quarters during the walking safaris and tours. The park also shelters chameleons, iguanas, and turtles in the open-air vivarium. Around 40 endemic plant species are also found here. The Croc Farm is a botanical park whose main attraction is the Nile Crocodiles. Besides, it is also home to many other Malagasy animals and birds, such as the lemurs and the smallest chameleon fossa. There is also a restaurant that serves crocodile meat including the croc burger, besides shops selling crafts, belts, bags from crocodile leather.

The Parc de Tsarasaotra in the heart of the city is where the RAMSAR wetland Lake Alarobia shelters nearly 14 threatened bird species, such as the Madagascar little grebe, Meller’s duck, and the Malagasy pond heron.

The Botanical and Zoological Gardens of Tsimbazaza or the Tsimbazaza zoo is a great place to explore the wildlife and botany of the city and is also popular with children.

Lake Anosy is an artificial lake in the southern part of the city. In the middle of the lake on an island is a memorial built in honour of the soldiers who lost their lives in the First World War.

The Is’Art Galerie is the city’s contemporary art gallery and hosts the Festival of Urban Arts encouraging intermingling of other African artists too.

The Lisy Art Gallery is an outlet for commercial crafts and arts designed for the tourist market.

Shopping is a major exercise while visiting the city and the Analakely Market is the perfect local experience one can hope for. The bustling market place with street vendors selling traditional items to shops selling souvenirs or household items is also jammed with fruit, seafood and local delicacies such as grilled lizards on sale.

The La Digue Market is known for its wonderful souvenirs and for wholesale or retail shopping the TanaWater Front mall is the place to go. It is also here that one can find some great food outlets ranging from European and American cuisines to Mexican and Asian restaurants, besides of course Malagasy dishes.

Antananarivo is a perfect destination for its accessibility to the many other wonders of Madagascar. One can visit the Andasibe-Mantadia National Park or the beautiful village of Ampefy on the banks of Lake Kavitaha surrounded by volcanic wonders. Antananarivo being the capital city of Madagascar is a lively modern-day city that is rooted in architectural and cultural wonders to its past. It has a sense of the contemporary deeply knotted with the ancient and in many ways is the face and representation of the island nation.

Antananarivo is the capital of Madagascar is well connected to the world with flights from across the globe landing in the Ivato International Airport.