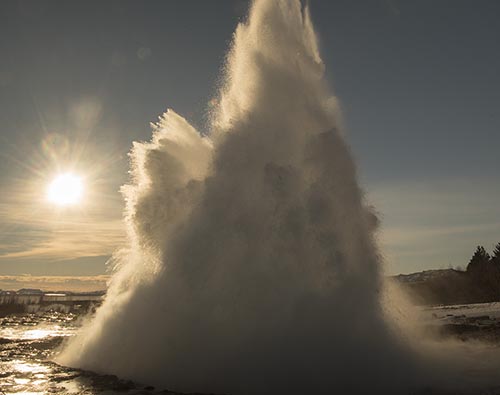 It's the time that you witness one of the strikingly beautiful natural wonders of Iceland, the Great Geysir. Geysir is a hot-water spout in the Haukadalur geothermal area. It is a valley of hot springs with boiling mud pits, translucent blue pools, exploding Iceland geysers, and colorful mineral details. Located in South-West Iceland, it is a two-hour drive from the capital, making it easily accessible. Making up just one of the many wonders along the world-renowned Golden Circle sightseeing route, Geysir is famous for having given its name to geysers all around the world. Already eager to go? Why the wait, pack your bags and experience the fascinating wonders of Iceland today!

How to reach: 2 hr drive from Keflavik airport

Dive in the beauty of the Great Geysir Iceland and incredible landscapes, Experience one of the most iconic sights of Iceland Geysir steaming spout

The geothermal activity in Iceland is fascinating but nothing is as dramatic as the geysers it creates. It is believed that the field has a total surface area of approximately 3 km². Aligned along a 100 m wide strip of land, most of the strips run from south to southwest same as the tectonic lines in the area. This 500 m long strip culminates near what once was the seat of the lords of Haukadalur. Now the hot spring water seems to have covered large areas and the geothermal field seems to have moved virtually. The heart of the geothermal fields now lies 2 km to the south of the Haukadalur seat with Marteinslaug and Gufubadshver, the two little springs being left behind. Iceland Geysir, the northernmost springs at the center of the field is believed to be the oldest. The oldest account of Geysir dates back to 1294 earthquakes when changes in the geothermal fields were caused in southern Iceland significantly changing the neighbouring landscapes and creating several new hot springs. 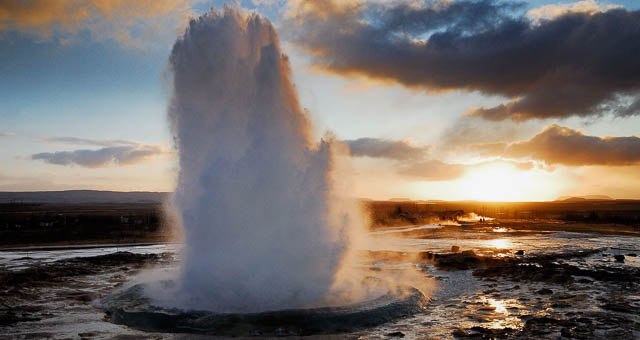 The geysers are situated in an active geothermal area in Haukadalur. The groundwater comes into contact with hot bedrock due to the underground plumbing system that heats up building pressure. The water spouts out often up to 30m into the air from the geyser when it reaches the peak temperature and pressure. When water boils further down the shaft, the Iceland volcanic eruption is more violent, as in the Great Geysir. There is a blast when the steam builds enough and releases the pressure. More than half the volume of the entire water column that boils out of the ground, is this steam. The eruption is stopped when the water cools below the boiling point.

At a depth of one meter (3.28 feet), the water temperature at Strokkur fills up in just a few minutes rising continuously making Iceland volcanic eruptions less violent. The Great Geysir, on the other hand, could spend about 12 hours filling with water after an eruption. You should definitely watch out as the water is extremely hot during the eruption so, enjoy the geysers from a distance. 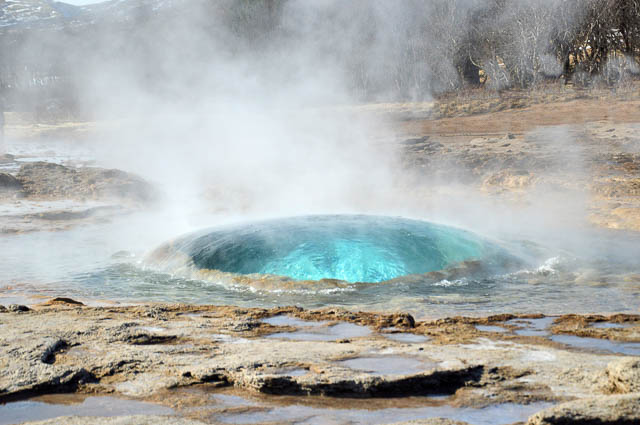 You can plan your vacation to Iceland Geyser anytime around the year. Summers are perfect to view conditions for an eruption and feel a real sense of the immense heat churning mere meters below your feet in the winters. Witness the magnificent moment of the boiling water carving its way through the snow and ice so smoothly.

The Strokkur Geyser erupts every 15 minutes or so up to 10 meters in the air. If you want the area to be less crowded to have a moment of your own, it is recommended that you either come in the morning, before 10 o’clock or after 4 pm in the evening. During the high season of June to August, the Geysir Iceland will witness many tourists almost all times so you can plan your vacation accordingly to enhance your once-in-a-lifetime experience. 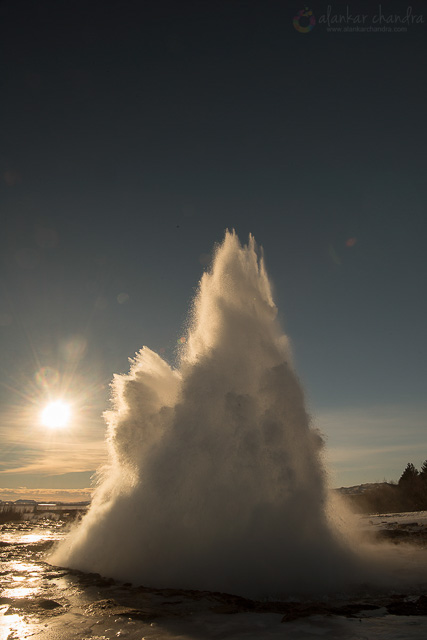