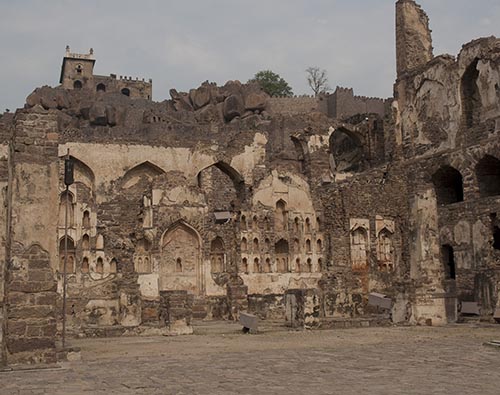 Hyderabad is one of the few cities in which modernization and history have complemented each other, and neither has taken a back seat. Popularly known as the City of the Nizams, Hyderabad is dotted with historical monuments that take you back in time. Be it the Golconda Fort, the Salar Jung Museum, or the Ramoji Film city, Hyderabad has varied offerings for its visitors.

Be it the bustling bazaars of Old Hyderabad selling colorful lac bangles, sarees, and filled with the aroma of Mughal dishes being prepared in nearby eateries, or the glittering insides of the Chowmahalla Palace, every part of Hyderabad has a unique flavor to it that leaves tourists craving for more.

The city has a plethora of places to visit like the Mecca Masjid, the Golconda Fort, and the Charminar and numerous things to do like heritage walks, food walks, shopping tours, and a lot more.

As soon as you step onto the streets of Hyderabad, you can see the rich history of the city imprinted on its monuments and the lifestyle of the residents.

The city was founded by Mohammad Quli Qutub Shah of the Qutub Shah dynasty and named after his wife. It was Quli Qutub Shah, who established the magnificent Golconda Fort and many other places of interest in the city. In 1798, the then Nizam of Hyderabad signed a military and political alliance with the British.

The multiple changes of rulers that Hyderabad underwent in the Medieval period has shaped its culture and tradition in a unique fashion. While the Nayakas and the Rayas shaped it much like the rest of the southern part of India, the Qutub Shahi rule saw the introduction of Indo-Islamic culture in the city. During the British rule in India, there was a moderate influence from western culture as well.

Present-day Hyderabad is a blend of Islamic and Hindu traditions. Hence, all festivals are celebrated with much pomp and show. The cuisine culture is a conglomeration of Nawabi, traditional Andhra, and Mughal cuisines. Kathak and Bharatanatyam are widely practiced dance forms. 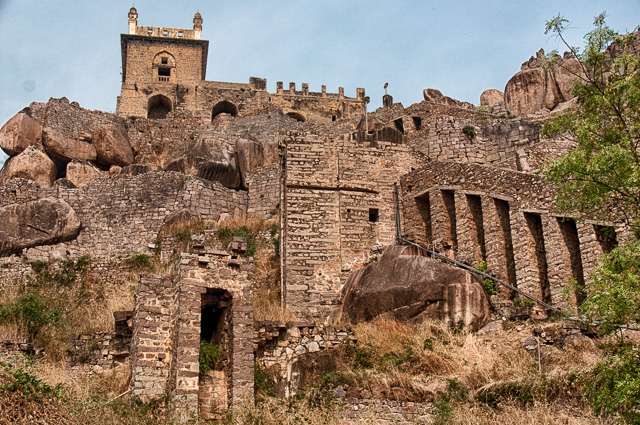 Golconda Fort: The impregnable Golconda Fort is one of the most renowned forts in the country. Perched on top of a hill, the Golconda fort with its drawbridges, halls, gateways, and stables is a must-visit while touring Hyderabad. The top of the fort gives a splendid panoramic view of the mighty Deccan plateau and the city beneath.

The Qutub Shahi Tombs:A stone’s throw distance away from the Golconda Fort is the Qutub Shahi Tombs, where the rulers of Hyderabad lay in peace. Thousands of tourists flock the tombs every year, thanks to the enormous variety of architecture that is on display and the picturesque Ibrahim Bag garden that encompasses the area. 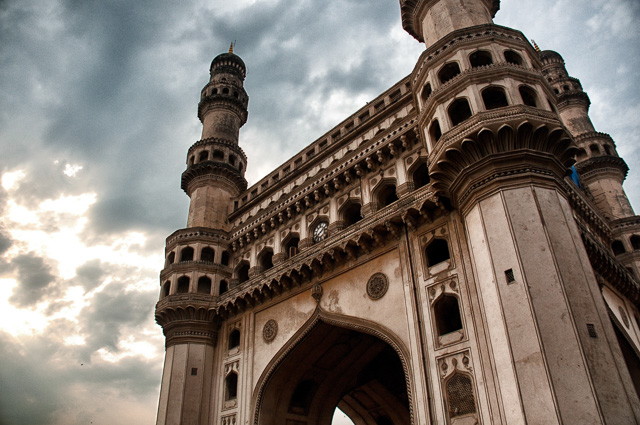 Charminar: The Charminar, the most iconic of all places to visit in Hyderabad, is located at the heart of the old city, encompassed by busy bazaars and historical monuments such as the Mecca Masjid and the Chowmahalla Palace. The monument is a grand display of the architectural styles of the bygone era and is extremely popular among the tourists.

Salar Jung Museum: The Salar Jung Museum is perhaps the most hailed museum in the country. With its rich collection of invaluable art objects, antiques, and rare books and manuscripts from all over the world, the museum is thronged by hundreds of thousands of tourists every year.

Mecca Masjid: Commissioned by Muhammad Quli Qutub Shah, the Mecca Masjid is one of the oldest and the largest mosques of the country. The masjid houses a hair of Prophet Muhammad and holds a place of immense importance in the minds of the followers of Islam. The sweeping courtyard of the mosque, when flocked by pigeons, is a mesmerizing sight.

Chowmahalla Palace: The Chowmahalla Palace, built almost two centuries ago, is one of the highlights of Hyderabad. The glittering insides of this mammoth palace are nothing like you have ever seen. The architecture and the splendor that characterizes the palace speaks of the luxury life that the Nizams of Hyderabad led.

Paigah Tombs: The Paigah tombs house the tombs of various high-ranking nobles who served the Nizams and engraved on its walls are the stories of the brave Paigah. It is a vivid illustration of Indo-Saracenic architecture, which is a very rare architectural style and is visited by tourists from all over the country.

Birla Mandir: The Birla Mandir, perched atop the Kala Pahad, is a stunning temple known for its fantastic architecture and the peace and tranquillity that prevails inside it. For decades, it has been an important part of tourism in Hyderabad and is a place of religious importance for the Hindus.

Purani Haveli (HEH The Nizam’s Museum): The Purani Haveli, housing some of the city’s most treasured artworks, mementos, and souvenirs, reserves an important place in Hyderabad’s history. A major attraction for tourists is the two-hundred- and forty-feet long wardrobe that has been deemed as the world’s largest wardrobe. 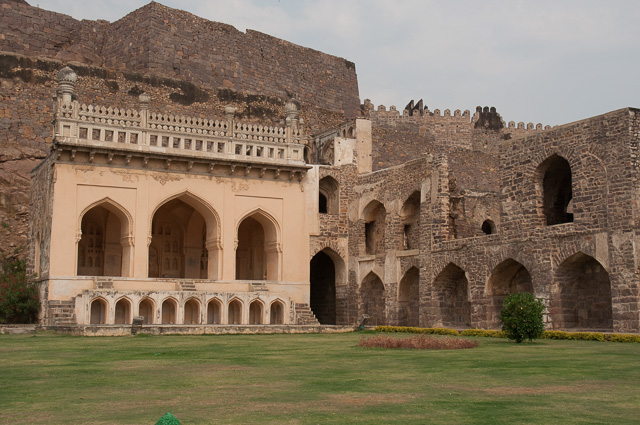 Charminar Historical Walking tour: Hyderabad is a historic city, and in the core of it lies the Charminar Area. Encompassed with historical monuments and bustling bazaars, the Charminar is history in itself. The walking tour takes you through the colorful bazaars to some of the most interesting places to visit in Hyderabad like the Mecca Masjid and the Chowmahalla Palace and brings you closer to life in Hyderabad.

Old Hyderabad Food walk: Hyderabadi cuisine resonates with India’s food culture, and the old part of the city is where you will find the most famous eateries. The walk covers the most popular joints in Old Hyderabad. These eateries, which mostly cater to rich and savory Mughlai cuisine, are famous among the foodie community for dishes like Paya Masala, Bheja fry, wide varieties of kebabs, and, of course, the Hyderabadi biriyani.

Ramoji Film City Tour: The Ramoji Film City is the biggest of its kind in the country and also holds the Guinness Book World Record of housing more than 50 film sets in one location. When you are visiting Hyderabad, especially with kids, you must not miss out on touring this vast and beautiful film city where hundreds of top Bollywood movies have been shot. 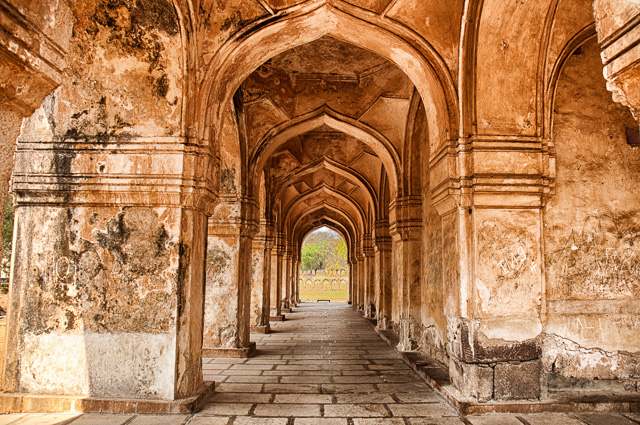 Besides the historical places to visit in Hyderabad and Mughlai cuisine, Hyderabad is also famous for the different styles of textiles that one gets in the city. Kalamkari, Ikat, Mangalagiri, Gadwal, Kothakota, and Zardosi are some of the most famous styles of textiles, unique to Hyderabad that tourists shop for. Besides textiles, lac bangles, shoes, leather bags, pieces of jewelry, and curios are some of the most shopped items by tourists in Hyderabad.

There are many shopping tours of the city that take you to a plethora of shopping destinations ranging from boutique shops in glittering malls to antic bazaars. 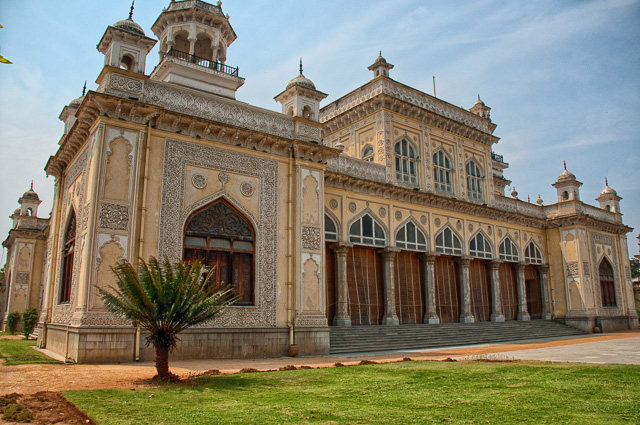 With the city boasting of a number of luxury hotels, lodging has never been a problem in Hyderabad.

If you are looking for a royal lodging option in the City of the Nizams, you can opt for the Taj Falaknuma Palace or its sister hotel, the Taj Krishna. For something contemporary, you can choose the ITC Kakatiya hotel. All three are extremely luxurious and comfortable and are sure to make your stay in Hyderabad a memorable one.