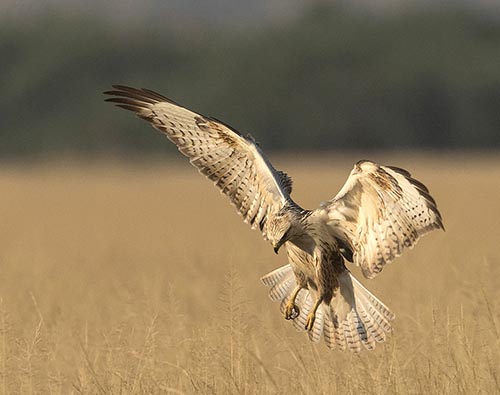 Chhapar, a quaint and small village, is located in the Churu district, Rajasthan. Despite inadequate or low rainfall, protected grasslands exist in the expanse of Chhapar. The protected grassland area gets the name "Tal Chhapar'' as flatlands are called "Tal" in Rajasthani colloquial language.

Located around 215 km northwest of Jaipur and 85 km southwest of Churu, the grassland sanctuary covers an area worth 70 square km. It includes ponds, sand, scrub, salt flats. Mammals like the blackbuck deer, the Indian Gazelle, wolves, and desert foxes inhabit the Sanctuary and co-exist in harmony.

The Sanctuary is a part of the migratory route for many birds, especially Harriers. Bird species like tawny, imperial, short-toes, steppe eagles, demoiselle cranes are also migratory bird species, apart from Harriers. Apart from the migratory birds that visit for a particular season, permanent residents include crested larks, ring and brown doves, and skylarks.

How to reach: 4 hours from Jaipur airport

Famous for: Birds of prey,

Tal Chhapar Wildlife Sanctuary is a haven for the wild. Located in the quaint Churu district of Rajasthan, the Park is secluded, and one of the best kept secrets in the Indian Wildlife experience. Even with low rainfall due to its location on the fringes of the Thar desert, the Sanctuary has grasslands that are at a distance of 350 km from Delhi and 200 km from Jaipur, by road. As you get close to the park, you'll find undulating terrain and quintessential dunes. Once you enter the Sanctuary, all you'll find are protected grasslands and dense foliage. The thick canopy of trees increases the aesthetic appeal of Tal Chappar Wildlife Sanctuary. 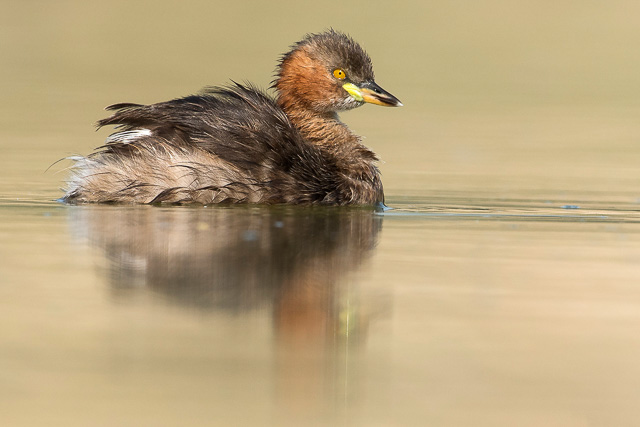 While the Park is filled with various kinds of mammals, such as the Nilgai, Chinkara, or the Indian Gazelle, Desert Fox, Indian Fox, Desert Cat, Jungle Cat, and Black-naped Hare, theBlack Buck Antelope or Antelope Cervicapra continues to be a prime attraction. The blackbuck antelope, also known as the blackbuck deer, inhabit the Park in abundance, with numbers exceeding 2500. These graceful mammals spend their time roaming here and there, grazing in the grasslands or surrounding areas. 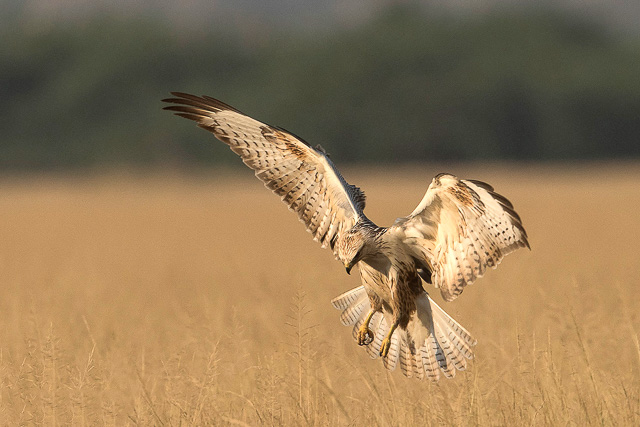 Grassland birds like Rollers, Laggar Falcons, Red-necked Falcons, and Indian Coursers are interesting to observe, either because of their flight speed, or their elegant stance and gait. Rollers, owing to their blue plumage, appear as a tiny blue flash when flying around. Black Francolins from the pheasant family have an unmistakable and unique plumage, plagued with distinct spots. Flocks and flocks of Starlings keep the tourists entertained by showing off their acrobatic skills and iridescent plumage. Another interesting act would be the Stoliczka’s Bushchat’s famed puff-and-roll routine. 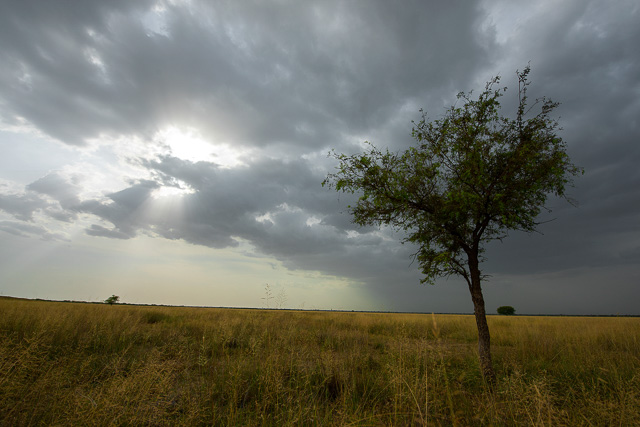 Winters witness birds migrating from far-off places in Asia and Europe to the Tal Chappar Wildlife Sanctuary. These include the Demoiselle Cranes- delicate and maiden-like, and Bar-headed geese, which travel from across the Himalayas to reach here. Raptors are also observed in abundance, with around 42 species swarming all over. You might find many Eagles, Buzzards, Falcons, Hawks, Vultures, and Harriers here. 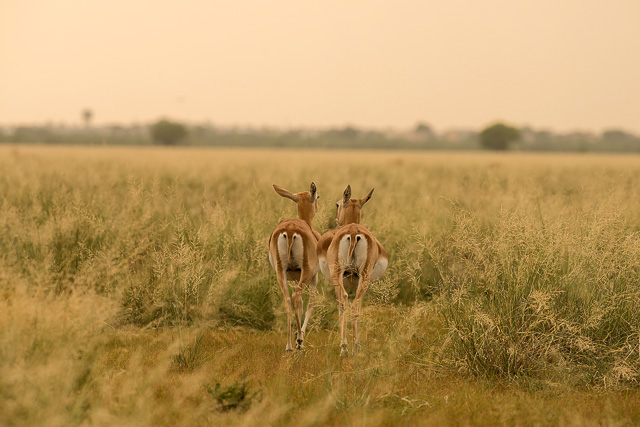 While the blackbuck deer, desert fox, rare migratory birds, and raptors continue to enthrall the visitors, wildlife is abundant even outside the park. If you visit the Park, you must also visit the Gaushala. It is a community cattle dumping ground outside the village, and bird activity picks up post 9 am. The area is rigged with many spiny-tailed lizards which, in turn, attracts raptors, foxes, cats, and other predatory reptiles. The neighbouring village, Chadwaas, is known for a large number of waders and especially demoiselle cranes. 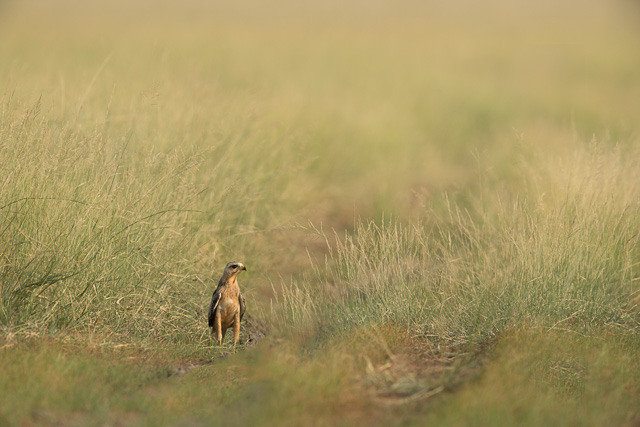 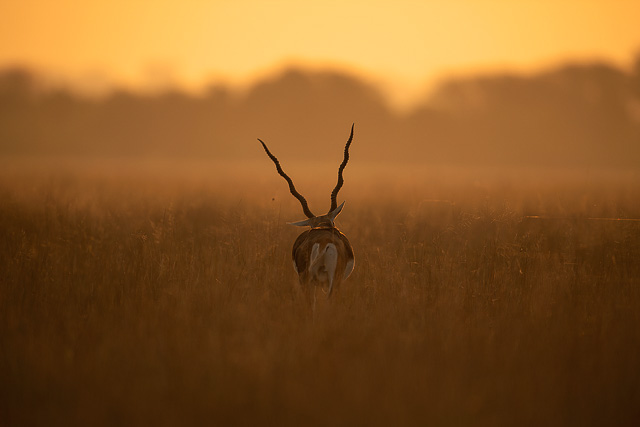 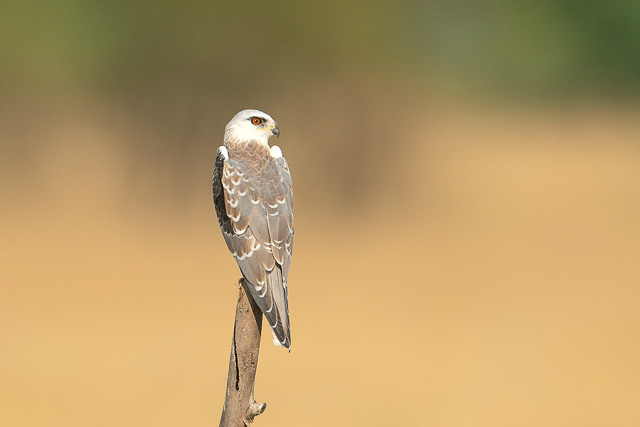