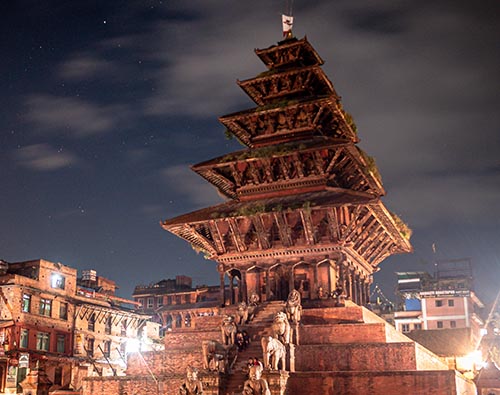 Bhaktapur is the smallest city among the three ancient cities of Kathmandu valley. It boasts of cultural heritages, architecture, and organic ethnic Newari lifestyle. It is located 20 km east of Kathmandu and is also known as ‘The City of Devotees’. Lush green fields surround the beautiful city and the majority of the population is dependent on agriculture to sustain their daily needs. The historical art and architecture etched on the walls of the heritage of the city have made it one of the most popular tourist destinations of Nepal.

Bhaktapur’s culture is a unique mix of Hindu and Buddhist religions. It is home to numerous temples and Bihars such as Dipankar Mahavihar, Sukra Varna Mahavihar, Chatu Brahma Mahavihar, PrasannaSheel Mahavihar, and the like. Bhaktapur Durbar Square, Pottery Square, Taumadhi Square, and Dattatraya Square are the four main centers of rich culture, settlement, history, and development of Bhaktapur. The various monuments add on to Bhaktapur’s existing aesthetics. The city is popular for hosting many festivals throughout the year.

Although the earthquake of 2015 demolished many of the ancient monuments, the city stood up stronger than ever with the help of the Bhaktapur Municipality. The city allures tourists from all across the globe and the local people are extremely polite and hospitable. Bhaktapur is a perfect blend of history, heritage, and hospitality.

Best time to visit: Mar to May/Sept to Nov

Bhaktapur was founded in the 12th century by King Ananda Malla. Jitamitra Malla, Bhupatindra Malla, and Ranjit Malla were the last three Malla rulers of Bhaktapur who played a significant role in building the palaces and temples of Bhaktapur Durbar Square. It was conquered by Prithvi Narayan Shah in 1744 and was unified under one rule along with the other towns of the Kathmandu Valley. After a bloody coup in 1846, Bahadur Kunwar Ranaji took control of Nepal. King Mahendra took control in 1960 and political turmoil continued in the region throughout the late 20th century. In 1934, after a major earthquake destroyed more than 2000 homes, restoration of the buildings was undertaken over the years including efforts funded by West Germany and the U.S. The Durbar Square in Bhaktapur is one of the many UNESCO World Heritage Sites in the Kathmandu Valley.

There are numerous ceremonies performed during the lifetime of Newar people. These indicate the 16 rites in the Hindu and Buddhist religions. Some of these ceremonies include Naamkaran, Annaprasan, Chudakarma, Ilhi, and the like. Indulge in the melodies of traditional Newari songs like Ghatu and Mohani that portray the beauty of Newari culture. The tremendous dance forms depict the unique lifestyle of the Newari people. Black cotton sarees with bright red borders form the traditional costume of this region. One can witness unique cultural diversity, ritualistic traditions, and vibrant outfits in the valley. Cows are worshipped here and the temples are considered to be the holiest places. Elders are treated with respect and the right hand is used for good deeds like eating, giving, and praying. These interesting customs and beliefs must be followed when you visit this region.

Bhaktapur is famous for its architectural magnificence. It is home to beautiful structures such as the Badrinath Temple, Kedarnath Temple, Gopinath temple, Chyasalin mandap, Phasidegal, Lanpadegal, Jagannath temple, Taleju Bell, and the like. These structures date back to the 17th century and are mostly built in Nepalese traditional architectural styles. The pagoda style is another prevalent style of architecture in the monuments found in this region. Most of the monuments are built as a combination of Hindu and Buddhist styles of architecture. Different types of temples can be found in the premises of Bhaktapur Durbar Square. Spectacular wooden carvings and intricate stone sculptures form an integral part of the Nepalese style of architecture. The unique architectural styles of this region attract tourists from all across the globe. One can indulge in the sheer beauty of the monuments that dot this region. 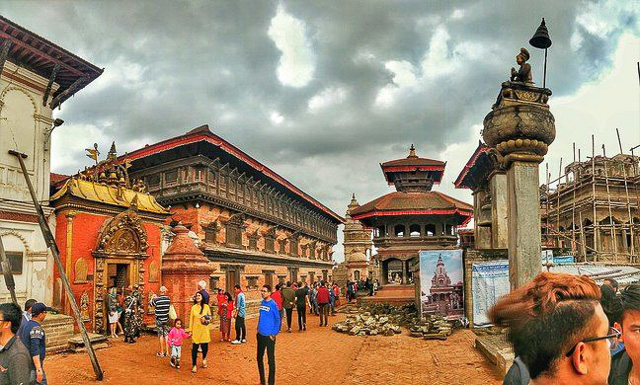 Bhaktapur Durbar Square: The Bhaktapur Durbar Square is one of the most popular heritage sites in Nepal. It depicts the city’s rich culture, history, and architectural designs. The Durbar square is the city’s chief center for architectural monuments and arts. It is home to the famous golden gate entrance to the main courtyard of the Palace of 55 windows. It is one of the world’s most beautiful specimens of its kind.

Bhaktapur Nyatapola Temple: The Nyatapola was built by King Bhupatindra Malla in 1708. The name of the temple means 5-storied and is the tallest temple of Kathmandu valley. A pair of figures, starting from bottom wrestlers, elephant, lion, griffins, and goddesses can be found in each of the five terraces.

Bhairavnath Temple of Bhaktapur: This temple was built by King Jagatjyoti Malla. It was originally built as a one-storey pagoda and was later changed into a three-storeyed temple by King Bhupatindra Malla in 1718 AD. The temple is dedicated to Lord Bhairav and its artistic grandeur allures visitors from all around the world.

Dattatreya Temple: This temple is believed to be built from a single tree in 1427 AD. The monastery has exquisitely carved peacock windows located near the temple area.

Pottery square and market: there are two main pottery areas around Bhaktapur. The oldest pottery square is at Suryamadhi and the other one is located south of Nyatapola square. Witness the craftsmen creating magic in these pottery squares.