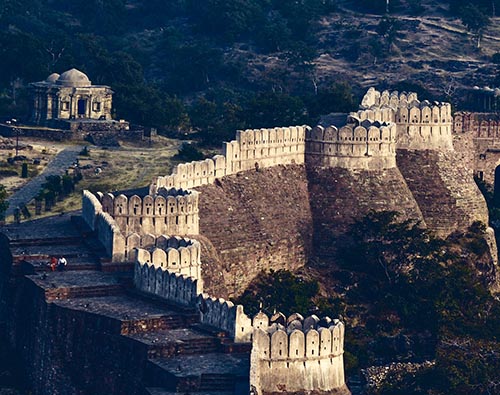 The quaint, small, and fortress town of Kumbhalgarh is a popular travel destination for its historically significant attractions. The town gets its name from the Mewar king Rana Kumbha, who built the Kumbhalgarh fort.

The Kumbhalgarh Fort and the temples in the fort region, along with the royal cenotaphs, make up the chief attractions of the town. It is the longest continuous wall after the iconic Great Wall of China.

However, what draws the tourists to the city aside from the fort is the town’s wildlife sanctuary and the jungle safari in Kumbhalgarh. The dense forest surrounds the fort, which is its highest point, presenting refreshing imagery of Rajasthan, known mainly for its desert area.

A few of the must-visit places include the splendid Badal Mahal and the interconnected Mardana and Zenana Mahal, Vedi temple, Parshuram temple, and Neelkanth Mahadeo temple.

Surrounded by the plush and magnificent Aravalli hills, Kumbhalgarh is a scenic spot perfect for photographers and nature lovers. However, its appeal extends to history buffs, as well, with the rich history of a wise and brave ruler like Rana Kumbha.

How to reach: By road from Udaipur

Ranakpur Temples: Situated in the Ranakpur village, the temple is a vast complex of stunning architecture and four temples-- Chaumukha temple, Parsavananth temple, Amba Mata temple, and Surya temples. Together, these four are known as the Ranakpur temples, one of five major pilgrimages of Jains. The intricately designed pillared halls with domes supported by columns are some of the attractions of these temples. However, many other things attract tourists to this architectural masterpiece. Some of them include the color change of the column from golden to pale blue in the morning and the unique design on each of the 400 columns in the temple. 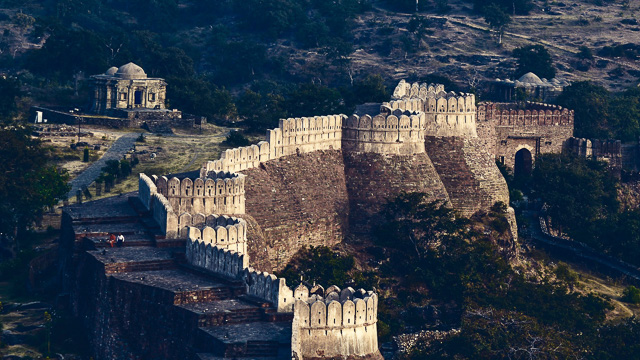 Rajsamand Lake: Built by Maharana Raj Singh in 1660, Rajsamand lake drips with a rich history spanning from the Rajputana days to the World War II period. The lake stretches to 4 miles in length and 1.75 miles in breadth with its main supplier being River Gomti. Rajsamand Lake's embankment, situated on the lake's southern end, has a historical significance of its own. It is where Maharana Raj Singh and his descendants conducted his Tuladan rituals. Aside from the white marble embankment, the lake boasts a magnificent dam. 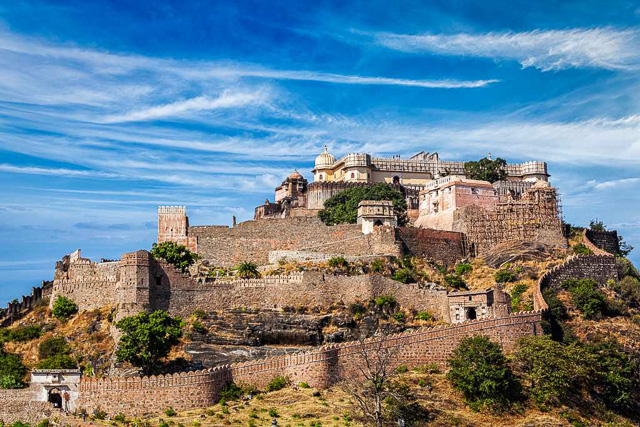 Nathdwara Temples: Known as the "Haveli of Shrinathji," the architecture of the Nathdwara temple is simple, but its appeal to tourists remains unbounded and ceaseless. Shrinathji is the form of Lord Krishna when he lifted the hill Govardhana and his image in the temple inspires devotion and admiration. There is an interesting and heroic story behind the establishment of the temple in the 17th century. The image of Shri Nath Ji is said to have been rescued by Rana Raj Singh from the clutches of Mughal ruler Aurangazeb. However, the image refused to move from the place where the temple stands, and therefore, the priests decided to build a temple around the image. 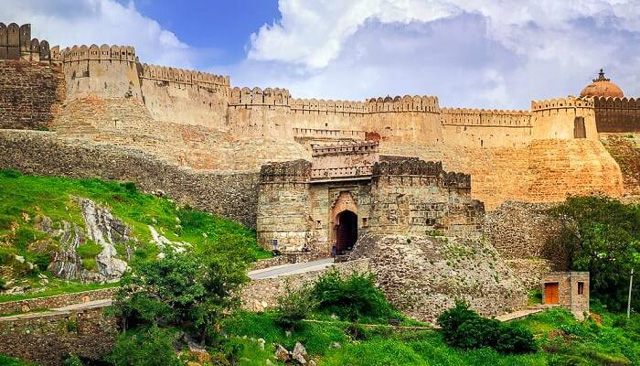 Narlai: Narlai is a small idyllic village situated in the heart of the Aravalli Hills. Surrounded by the forested hills, the village is one of the most scenic and charming rural locations in Rajasthan. Its location between Jodhpur and Udaipur makes it the best candidate for a one night stay. Moreover, it is just one hour away from the Kumbhalgarh fort. Tourists can enjoy the Narlai horse safari, walking village tour, and stepwell dinner among other things in this location.

Ghanerao VillageFormerly a part of the Mewar district, Ghanerao is a small village in the Pali district of Rajasthan. The cultural heritage and wildlife attract tourists to this quaint little village. It was once a prosperous village, an economic center during the era of Mewar rulers. Ghanerao houses several Hindu and Jain temples with Mucchal Mahavir temple being the most renowned among them. The Ghanerao castle, built in the year 1606, is a must when visiting this small village. 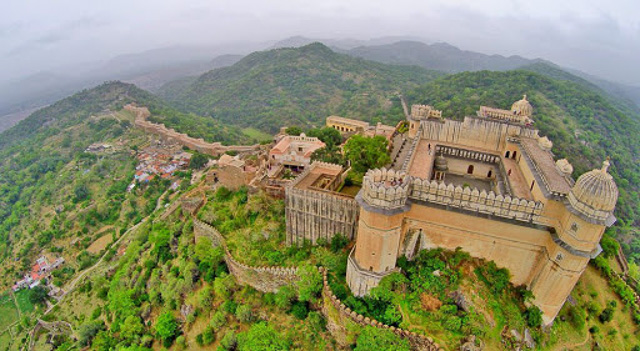 Kumbhalgarh Festival -The annual Kumbhalgarh festival, held in the first week of December, is a sight to see for anyone visiting the culturally and historically rich state of Rajasthan. The Three-day festival attracts artisans and performers from all over the world. Set against the backdrop of the Kumbhalgarh Fort, the event commemorates Maharana Kumbh’s contribution towards the development of art and culture. As such, the festival features performances of several Indian classical and folk art forms from all over India. During the festival, the formidable fort is adorned with the finest decorations and illuminated, making it an unforgettable spectacle. In the crisp December air, the festival charges up the energy of the spectators with its display of some of the amazing talent of the country.

On the first day, you get to see traditional dance performances like Ghoomar, Kalbeliya, and Kachhi Ghodi. The second day, witnesses fun competitions between the native and foreign guests like Pagdi Bandi, Tug of War, musical chair, and many more. The final day of the festival is where one can enjoy the beauty of Rajasthani folk songs along with the enthralling Sufi performances. Together, the three days constitute fun, laughter, and bonding that is an experience one would never forget. 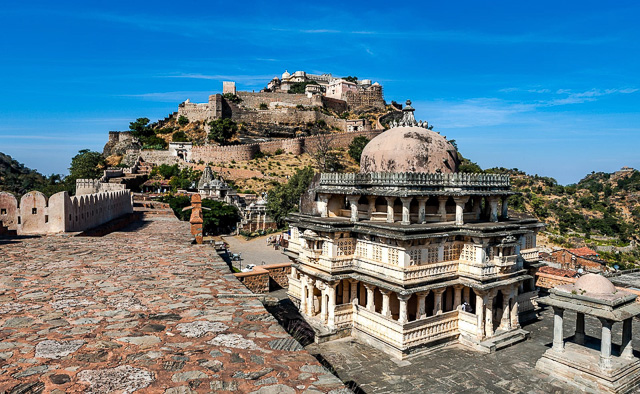 Very much like the city itself, the accommodation in the area has something for every traveler. Nature and royal life lovers have the Mewar royal family-owned The Aodhi, whereas for the outdoorsy type Fateh Safari lodge will be more appealing. Those traveling with their families have the option of Club Mahindra Kumbhalgarh resort. However, if you want an authentic palace life experience, why not live in an actual palace at Hotel Fateh Bagh?

The AodhiOwned by the Mewar royal family, The Bodhi is one of the closest hotels to Kumbhalgarh fort. The hotel is nestled in the jungle and offers a scenic view to its guests along with horseback riding and outdoor pool services.

Fateh BaghFateh Bagh offers guests the authentic palace life with an arresting architecture and ethnic decor. The period furniture inside the palace-turned-hotel takes one, two centuries back in time, with each room conveying a story lost in time.

Fateh Safari LodgeAs suggested by its name, Fateh Safari Lodge offers its guests wildlife safari to the Kumbhalgarh wildlife sanctuary. Situated on the edge of the Aravalli Hills, the hotel is the best place to admire the Mewar plains, perfect for those who love photography and the outdoors.

Club Mahindra KumbhalgarhClub Mahindra's Kumbhalgarh resort is one of the best accommodation options for a family trip to the fortress town. Situated on top of a hill overlooking the Kumbhalgarh valley, the resort offers individual balconies for each room with a splendid view of the UNESCO heritage site.