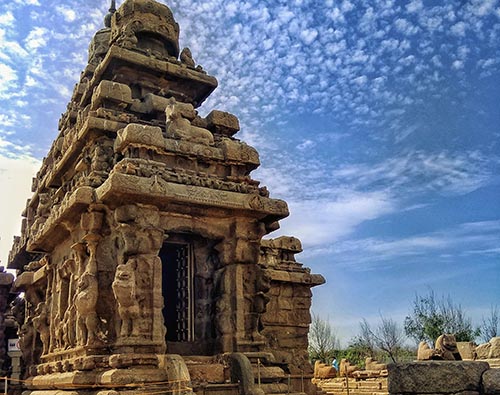 Mahabalipuram is a town in Tamil Nadu, India. The nearest airport is situated in Chennai, and tourists can reach Mahabalipuram via road, train, or air. The place is loved for its beautiful beaches and rich architecture. Mahabalipuram houses many temples and caves, which are a part of UNESCO world heritage sites.

People often visit the shore temple Mahabalipuram and relax in Mahabalipuram resorts near the beach. The best time to visit this town is between the months of October to March.

Mahabalipuram was discovered in the 7th century AD by Narasimhavarman I (Pallava King). Narasimhavarman was also known as Mahamalla, and hence the place got its name. The place houses numerous temples and caves which date back to the 7th and 8th century. The town plan was developed by the Britishers in 1827.

Mahabalipuram is also called the “Temple Town” of Tamil Nadu. The place is loved for its ancient and amazing architecture. It offers a friendly and happy vibe to the tourists, and they get to explore the majestic temples and caves. Tourists can feel the aura and be transported to the historian's land. The main languages spoken in Mahabalipuram are English and Tamil. Tourists can also indulge in a wide range of fun activities like boating, bike riding, fishing, trekking, and many more. 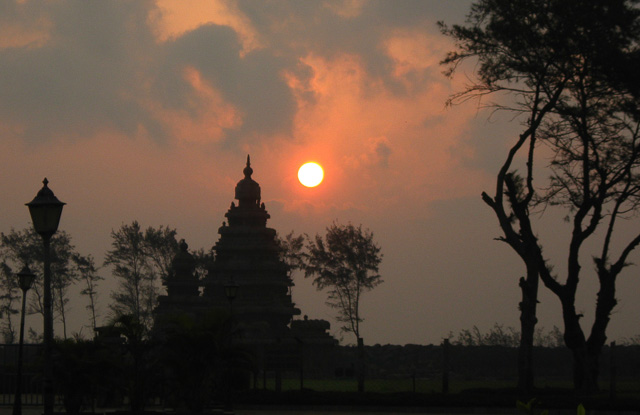 Shore Temple: Shore temple, Mahabalipuramwas built in the 8th century AD using granite blocks. The shore of Bay of Bengal can be seen from the temple, and hence, it was named Shore temple. It is one of the most visited tourist attractions in Mahabalipuram and is a UNESCO world heritage site. Shore temple houses a collection of temples and shrines and is one of the oldest stone temples of India. The place is known for its beautiful architecture.

Arjuna's Penance: Arjuna's Penance is one of the most popular tourist attractions. The place houses intricate carvings done on enormous rocks. The rocks were carved in the 7th century and depict scenes from the Hindu mythology, "Mahabharat." It became a part of the UNESCO world heritage site in 1984.

Mahishasuramardini Cave: This cave is located on a hill near the lighthouse. According to Hindu mythology, Durga beheaded a demon called Mahishasura. This scene is carved on the rock, and the intricate details make it beautiful. The rock was carved in the 7th century. It is also a part of the UNESCO world heritage site.

Descent of the Ganges: It is situated in Mahabalipuram and is a part of the world heritage site. Intricate carvings are present on two huge monolithic rocks. The rocks measure 96x43 feet and are enormous. The rocks depict the story of Ganges. The Ganges is known to possess superpowers and was brought to earth from heaven. The rock carvings tell the mythological story. 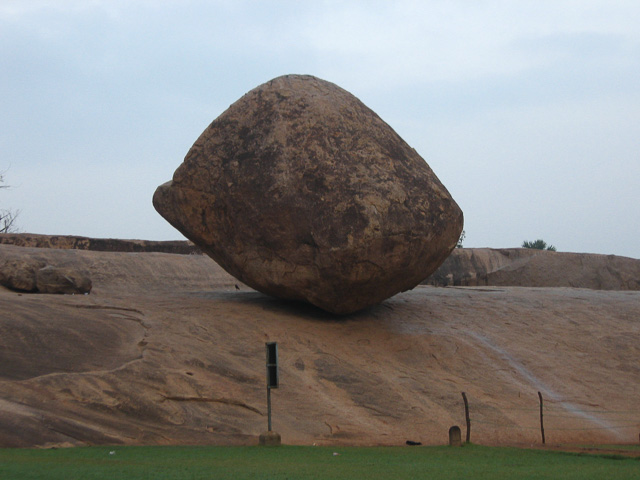 Ganesh Ratha Temple: Ganesh Ratha temple was built during the 7th century using pink granite. Initially, Shiva Linga was the main deity, but later, Ganesh idol was placed inside the Ratha temple. The temple has beautiful and intricate carvings, which are a feast to the eyes. This temple is also a part of the UNESCO world heritage site.

Pandava Rathas Mandapams: There are five structures shaped like rathas (chariots), and they were carved in the 7th century during the Pallava dynasty on monolithic rocks. The five rathas are named after the Pandava brothers (Mahabharata). It was made a part of the world heritage site in 1984. The architecture is inspired by southern culture. Tourists can visit this place between 6 am to 6 pm.

Krishna's Butterball: Krishna's Butterball is basically a large circular granite rock situated on an inclined surface. According to mythology, Krishna used to steal butter, and this rock is considered a small chunk of butter fallen from Lord Krishna's hand. Tourists visit this place to admire the huge rock resting peacefully on a surface. It is also a part of the world heritage site.

The Tiger Caves: It is a rock-cut temple which was developed in the 8th century. Tiger cave is a popular picnic and tourist spot. The scriptures in this cave helped in the discovery of the Sangam period. Tourists can visit tiger caves between Tuesday to Sunday. Visiting hours are from 10 am to 5 pm. 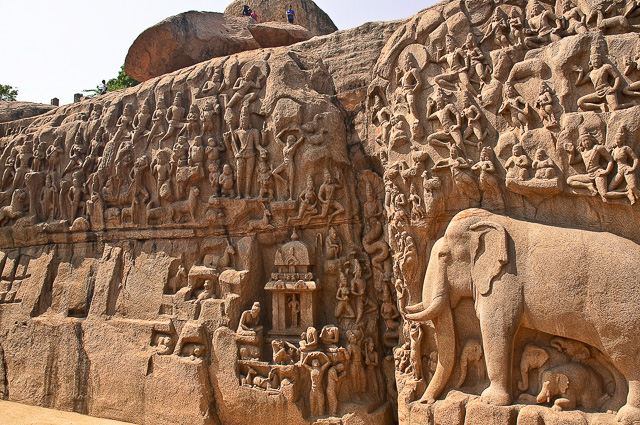 Varaha Temple: Varaha temple is also a rock-cut temple which is located behind the famous Arjuna's Penance. It is 4km away from the shore temple Mahabalipuram. The main deity of this cave temple is Lord Vishnu in the form of Varaha. There are numerous other carvings of different deities. Varaha temple is a part of the UNESCO world heritage site. 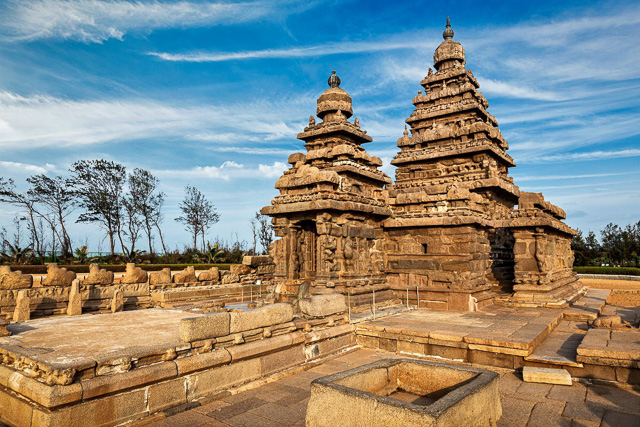 Kanchipuram: Kanchipuram is 70 kms from Mahabalipuram. It is an ancient town and houses numerous temples. Some temples in Kanchipuram were built in the 8th century. Apart from temples, the place is also famous for silk sarees. One can take a bus, cab, or train to reach Kanchipuram.

Alamparai Fort: Alamparai Fort is 50 kms away from Mahabalipuram and is located in a small village called Kadapakkam. The place was built in the 17th century, during the Mughal era. One can explore the ruins of the fort and enjoy the serene beach. It is a good spot to take photos. No entry fee for this place. 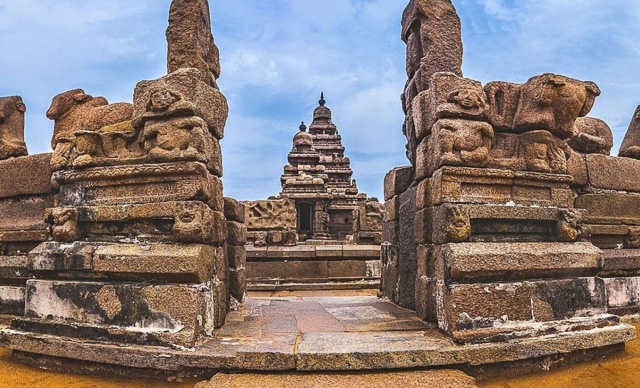 Mahabalipuram is known for its clear beaches and majestic architecture. Tourists visit this place all year round to explore the ancient culture. There are numerous Mahabalipuram resorts near the beach which offer a peaceful stay. Here are some of the best place to stay in Mahabalipuram:

Taj Fisherman’s Cove: It is one of the best Mahabalipuram resorts near the beach. This tropical-themed five-star resort and spa is an absolute delight to stay in. There are lots of cuisine options to choose from.

Radisson Blu Resort Temple Bay: It is a five-star hotel located just 10 minutes away from the town. The resort is spread across 46 acres, and the interior is breathtaking. The sea villas are preferred as they are just 15 feet away from the seashore.

InterContinental Chennai Mahabalipuram Resort: This hotel offers a breathtaking view of the ocean and Bio pond lake. The resort houses around 105 rooms. It is 45 kms from Chennai Airport.

Welcome Hotel Kences Palm Beach: This five-star hotel overlooks the blue beach and has a huge outdoor swimming pool. Arjuna's Penance is just 3km away from this resort. Spread across 9 acres, this place offers a comfortable stay.