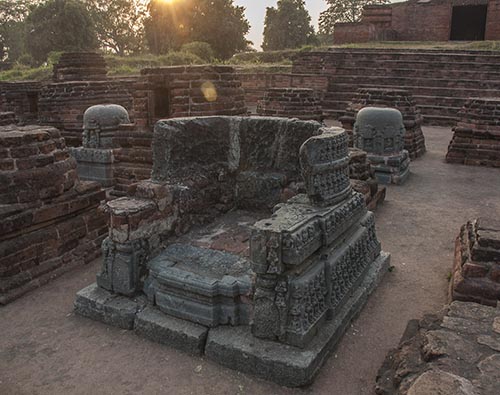 The Sanskrit word Nalanda means “Giver of knowledge”. Though the city got its name back in the 5thcentury AD, when it was founded, it still stands true to its name. Nalanda is situated about 90 km from the capital, Patna. The most famous and respected place of education in the country from centuries 5 through 12 was Nalanda University, one of the strongest points of attraction in Nalanda.

Nalanda, the place that houses the ruins of Nalanda University, the world’s most ancient university, called Nalanda ruins. Nalanda University’s history is one of the richest in the country. The place has been blessed with the presence of the great Buddha several times and has the International Center for Buddhist studies since 1951.

How to reach: By Road/Train/Air

Ancient Nalanda University Ruins: The most famous thing about Bihar Nalanda is certainly the Nalanda University Ruins. The beauty of this splendid location leaves the explorers spellbound. Built in 450 century AD by the Gupta emperors, the university accommodated nearly 10,000 students and 2,000 teachers. Various compounds make for a portion of the university, not to forget the huge student dormitories, temples, library, and the meditation halls. Several remains still lodge as ruins in the university, like the stone beds, study tables, ancient inkpots, and many more. The most iconic though is the Nalanda Stupa.

Pandu Pokhar:Pandu Pokhar, another historic site that dates back to the Mahabharata times is located in Rajgir and serves as a residential camping site with several activities, picturesque landscapes, and restaurants and lounges to enjoy the stay. This place has a history of the attack of King Pandu to occupy Rajgriha and then leaving this beautiful horse stable of a place behind which is now called Pandu Pokhar.

Pawapuri Jal Mandir:Jal mandir translates to “water temple”. This historic temple is situated in the city of Pawapuri in Bihar. This temple was built by the king in the middle of a lake. This marble temple stands as a famous pilgrimage spot for Jains. Adjacent to the mandir, over the lake that it is built on, beautiful lotus flowers can be spotted. 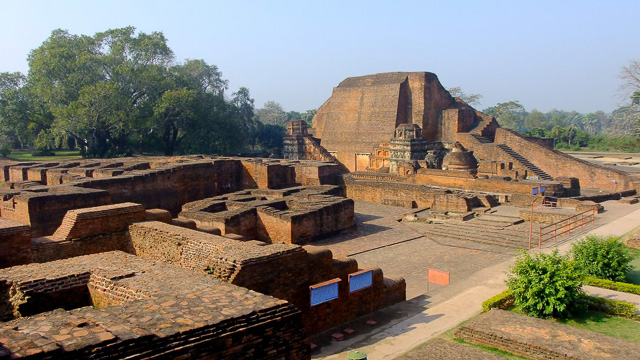 Hieun Tsang Memorial Hall: Built in the memory of a popular Chinese traveler, Hieun Tsang, who stayed in Nalanda to study Buddhism and Mysticism from Nalanda University in 633 AD, the Hieun Tsang Memorial is one of the famous attractions in Nalanda. The memorial hall is known as the place where he used to learn yoga. In fact, our first prime minister, Pandit Jawaharlal Nehru was the one who first initiated the construction of the memorial in 1957. The hall gracefully preserves all the documents of the Buddhist writings collected by Tsang.

Surajpur Baragaon: Surajpur Baragaon is a lake and a temple, located towards the north of Nalanda. There are many statues in the temple, of Buddhist and Hindu deities. A 5 ft high statue of Goddess Parvati stands as the main attraction in the temple. The temple is dedicated to Lord Surya, the sun god. It is a pilgrimage spot for several followers.

Kundalpur: Kundalpur in Bihar is located just outside of Nalanda. It is known to be the birthplace of Lord Mahavir. The major attraction is a temple built to mark the birth of the lord with a four and a half feet tall idol of Lord Mahavir. There are also several other idols within this grand temple with beautiful spires. 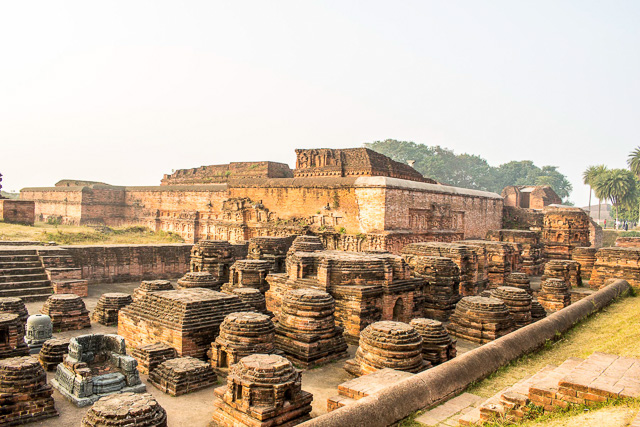 Rajgir: Located in the modern-day Nalanda District of Bihar, Rajgir is a town of many attractions. Rajgir, which was previously known as Rajgriha means “house of the king”.A few attractions in Rajgir are the Saptaparni Cave, temples, and monasteries. This town is known for being the place of congregation of various spiritual leaders and scholars. Lord Buddha had blessed the place with his presence at several instances and it is said that Lord Buddha had lived here. The Jivekarmavan Monastery is believed to be the most liked residence of Lord Buddha here. 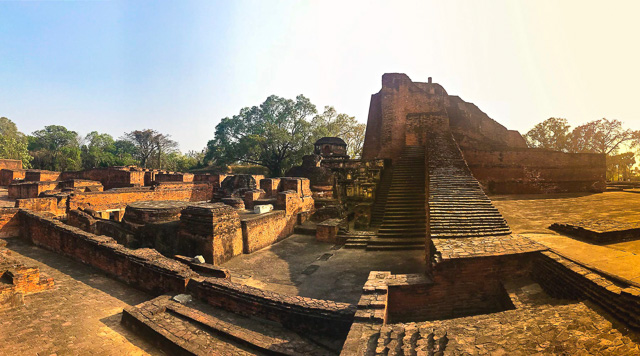 Traditional craft shops of Wooden inlay items: The manufacture of wooden furniture and woodcraft items has been a part of the rich history of Bihar. Articles like tabletops, pens, and wall plaques are made with wood carving and inlay work. The craftsmanship that goes into these items of artistic beauty has been appreciated by anyone who sees it. The inlay work for the wooden articles is done using different materials like ivory, metal, staghorn, and chips from different wood. These are then sold in small shops that can be spotted in many parts of Nalanda.

Stone Crafts: Carving of sculptures from stones has been a tradition since the ancient eras. The dynasty from those times is still known for its stone craftsmanship. The region is blessed with the abundant availability of lustrous, colorful stones. The guests visiting Nalanda love to take back the stone-carved Lord Buddha souvenirs with them. Many of the traditional stone crafts deal with the preachings of Lord Buddha. These are sold in various shops all around Nalanda.

Sikki Work: In Sikki work, a particular kind of grass called Sikki is used to make delicate beautiful objects and toys. These are sold in shops and are available for the visitors to purchase. The grass is stitched together to form shapes that resemble animals, birds, and other things. The women in Darbhanga, Sitamarhi, and Madhubani in Bihar indulge in the practice which is done on a large scale. 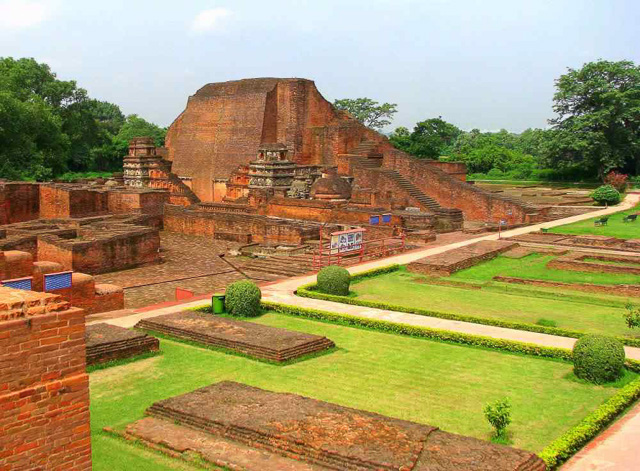 Bihar is a state of several delicacies. People from around the world take back experience of indulging in mouthwatering food items.

The sweets in Bihar are different than in any other part of the country. A few of the most famous sweets of Nalanda are Khaja, tilkut, pedakiya, laai, thekua, and anarsa.

Silao Khaja, the traditional delicacy of Bihar Nalandais known for its lip-smacking taste. Its crispness and texture add to the perfection of this dish. It is made of all-purpose flour, wheat flour, sugar, ghee, cardamom, and aniseeds.

Sattu Pani is a savory drink made of Sattu, flour from ground pulses and cereals. It is a great cooler to help you rehydrate and cool down during the hot summers.

Most of the dishes Nalanda is known for being vegetarian. Litti chokha, Dalpuri, Dahi choora, and Jhaal modhi are few of the most famous snacks and food items of Nalanda.

Another sweet of Bihar, Khaja is popular in the entire state and enjoyed during festivals. It is one of the main and most relished food items of the Chhath Puja Festival.