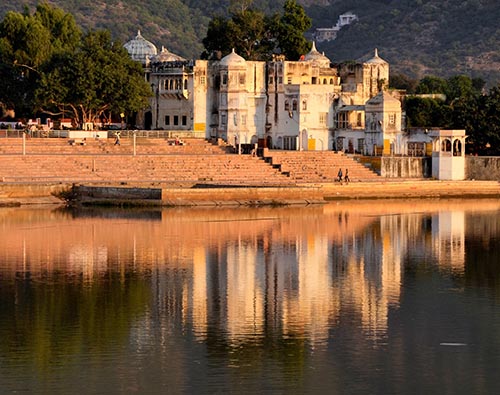 A rare combination of lakes, hills, forests and dunes, Pushkar India is a place of pilgrimage for Sikhs and Hindus. It is considered to be one of the oldest towns in the country and has been mentioned in the sacred texts as well. This place of natural marvel is surrounded by hills on the three sides, with the Snake Mountain or the “Nag Pahar” forming the natural border.

It is located at about the height of 510 meters in the Ajmer district of the Indian province of Rajasthan. This stunning city is painted in pastel hues particularly that of white and baby blue. Also, with numerous rooftop terraces, this picturesque city offers breathtaking views during the sunsets and sunrise.

It is one of the quietest cities in Rajasthan. It attracts thousands of tourists and devotees from all across the world. Pushkar India is a popular destination choice for the people of all the age groups. You will find yourself amidst solo-travelers in their 20’s to the couple in their 80’s. This place offers something for everyone. It also attracts the photography enthusiast and nature lovers.

This beautiful city has got an intriguing mythological past, captivating architectural history, and a hippie vibe. The essence of Pushkar roses is exported all over the world which makes it the “Rose Garden of Rajasthan”. It is also known for the famous Pushkar Camel Fair which takes place every year. There are so many amazing things to do and visit in Pushkar that would keep you on your toes if you ever decide to visit this place.

According to legends, a battle broke out between Lord Brahma, creator of the Universe, and a demon named Vajra Nabh. The lord slew the demon by intoning a mantra (a sacred utterance) on a lotus flower and the petals drifted to three parts on the earth surface which led to the immediate creation of the lakes around which Pushkar is situated.

The culture of Pushkar can be experienced the best during the Pushkar Camel Fair or Pushkar Fair. During the fair along with camel races, several games are also organized. The people are considered to be warm, friendly, joyous, and vibrant as the city itself. The people consider religion to be of utmost importance. Hinduism is chiefly practiced by the people. 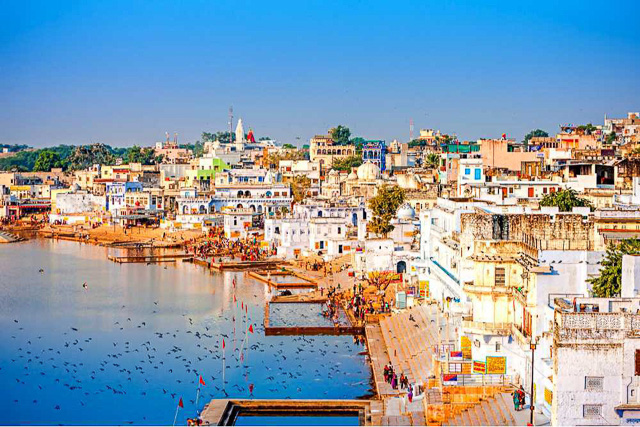 Pushkar Lake: Pushkar lake is the most popular tourist spot in the city. People visit here to take a dip in the holy water which is considered to be auspicious. It is described as the king of all pilgrimage sites or “Tirtha Raj” in the Hindu texts. It is about 10m deep and is in the shape of a semicircle.

Brahma Temple: This temple is dedicated to the creator of Universe, Lord Brahma who is said to have come on earth to perform a yagna and chose this particular site for his temple. It was constructed in the 14th century. With numerous fascinating features, this is the most-visited temple in Rajasthan.

Varaha Temple: This is dedicated to the boar (Varaha) incarnation of Lord Vishnu. It was constructed by King Anaji Chauhan in the 12 century with remarkable architecture features such as white walls, the dome at the top and even pillars. It was destroyed by the Muslim Emperor, Aurangzeb and was reconstructed by Raja Sawai Man Singh of Jaipur.

Savitri Temple: This temple is dedicated to the first wife of Lord Brahma, Savitri. Savitri had cursed the Lord when he married Gayatri to perform a yagna. Because of that curse, he is only worshipped in the city of Pushkar. The temple is situated behind the Brahma Temple on a hilltop. 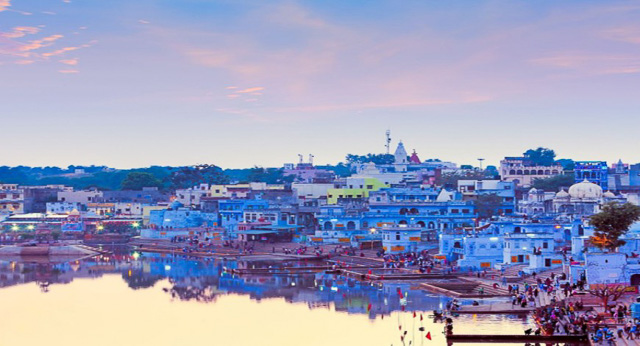 The Pushkar Camel Fair (or Pushkar Mela) or as locally called, The Kartik Mela is a blissful travel experience. This 100 years old annual festival is celebrated in the holy town of Pushkar at the time of Kartik Purnima.

It was originally started with the only intention to attract business activities between local cattle and camel traders. But today, the Pushkar Fair is a grand event. It has become an epic scale spectacle that attracts tourists from all parts of the world in November. People who visit this fair witness a peculiar yet fascinating, authentic Rajasthani festival.

This famous five-day festival is held during the full moon night of the Kartik month. The two days around the full moon is considered to be auspicious to redeem the sins. During those days, the visiting pilgrims and the locals take a holy dip in the waters of Pushkar Lake and offer their prayers to the deity of Lord Brahma. 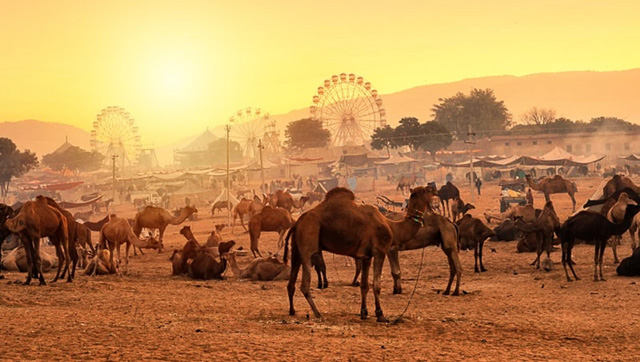 The main attractions in the fair are the beautifully dressed camels. Camel races, camel parades, camel dance show, camel beauty pageants, and the auction of the camels are the activities that take place in the fair.

Also, various fun games such as Tug of War and exciting cultural competitions like that of Longest Moustache, Matka Phod, etc are held. Folk music, dance performances, magic shows are also organized. Stalls of mouthwatering Indian snacks and food are one of the popular attractions. 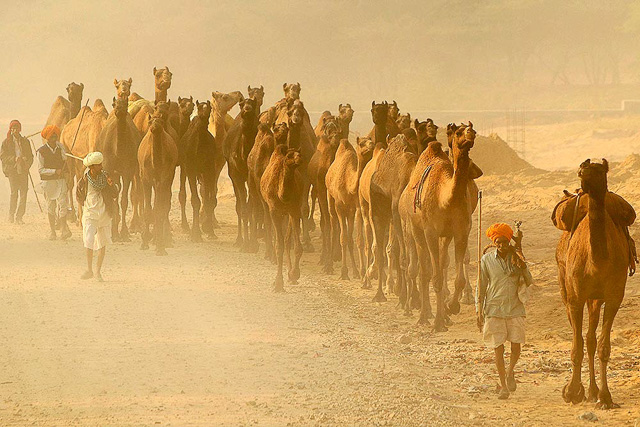 Things to do at the fair:

Camel Safari: Camel Safari is one of the must-have attractions of the Pushkar Fair, where visitors can ride around on camels and enjoy a rare view of the hilly, sandy desert landscape. The bumpy ride on the dunes with the view especially during sunsets and sunrises is quite fascinating. Surely this is one of the most exciting activities during the fair.

Staying at Camp: When visiting the fair, one must also stay at a camp. A lot of camping accommodation is available during the fair where one can enjoy the experience of camping surrounded by luxuries. Staying at a camp in the dunes of Rajasthan would surely be an experience that will ever be cherished and worth the money.

Hot Air Balloon Ride: If you want to experience and enjoy the unmatchable panoramic bird-eye view of the buzzing activities of the fair along with the nearby landscape from the top, go for a giant hot air balloon ride. This ride is a thrilling memorable experience but it is not for the faint-hearted. 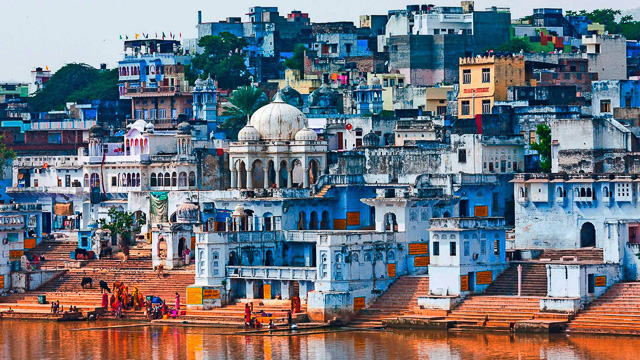 At Pushkar, there is an option of staying at standard to luxury camps and hotels. There are beautiful top-end resorts and also boutique heritage hotels in Pushkar.

Pratap Mahal- IHCL SeleQtions is the right place if want to stay at a private property and enjoy the lush greenery of the Aravalli hills. To enjoy a lavish stay, Gulaab Niwas Palace is a perfect choice. The resort Rawai Luxury Tents offers rooms with a patio that gives you the view of the city. Other popular accommodation in Pushkar India includes- The Westin Pushkar Resort & Spa, Pushkar Palace, and Ananta Resort & Spa.