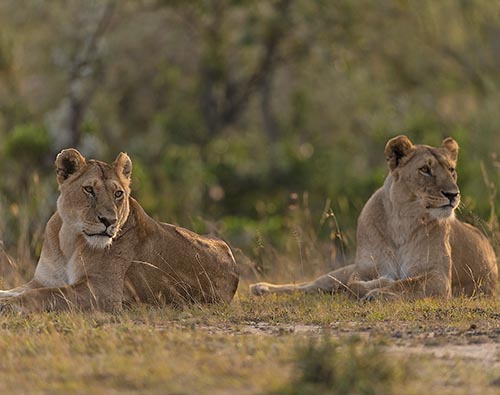 Located in western Uganda, Queen Elizabeth National Park is the second largest park and the oldest in Uganda. The park was once known as Kazinga National Park, until Queen Elizabeth II’s visit, following which the park was renamed to its current name to commemorate her visit. With its location in Africa’s western rift valley arm, the park lies on the rift valley floor running from Uganda to Malawi. The national park has a variety of habitats that include lakes, grassland savannah, forests, and wetlands.

One can determine the direction of the Kazinga channel, where you can spot the Sitatunga antelopes, from the terrace of Mweya safari lodge cottages. The national park’s 1978 sq. km area is home to a unique selection of around 69 species of mammals and is known for its abundance of hippos, elephants, and buffaloes.

With over 600 bird species inhabiting the park, it is known as the 2nd best birding area in Africa and 6th in the world. The Queen Elizabeth National Park is a place where one can engage in chimpanzee tracing and spot the famous tree-climbing lions of Ishasha.

How to reach: by road from Kampala/Entebbe or chartered flights

Months open: All year except April-May

Best time to Visit: December to February; June to August

Evidence shows the location of theQueen Elizabeth National Parkwas a human settlement around 5000 years ago. However, when European explorer Henry Stanley visited in 1889 all he found was smoke and 81 huts filled with goats and sheep. In 1891, when Fredrick Lugard came here, he found the hut abandoned and attributed it to a Rinderpest outbreak. In 1952, the national park was established as Kazinga National Park, before changing to its current name two years later to commemorate Queen Elizabeth II’s visit.

Ishasha: Dominated by the Candelabra trees, Ishasha is home to the tree-climbing lions. It is the only place in East Africa, where one can find the lions with ease, perched on the looming trees. Research has found that lions climb trees to escape from the hot ground while relaxing after a hunt. However, they also use the trees as a place to spy their next prey. Located in the south-western rim ofQueen Elizabeth National Park, the sector is home to woodland tree species like acacia, fig, and cactus trees. Aside from the tree-climbing lions, Ishasha has a herd of cattle and numerous antelopes.

Kazinga Channel: Being the nearest water body in the park, Kazinga Channel attracts a lot of wildlife. Commonly sighted animals here include hippos, crocodiles, statunga antelopes, buffaloes, elephants, etc. The channel is the location where freshwater lakes Edward and Goerge meet. The direction of the water is towards west from Lake Goerge to Lake Edward, as seen from the terraces ofMweya safari lodge. Located in Kasese district in the park, Kazinga Channel is divided into two parts-- North Kazinga and Kasenyi plains-- both of which are ideal for viewing games.

Mweya Peninsula: With dense vegetation and chunky grass cover and dominated by the candelabra trees, Mweya Peninsula offers several game drive tracks. Due to the trees and small bushes in the area, game viewing will be challenging. However, it is the best place to spot a leopard within the Peninsula’s shrubby thickets. Claimed to be the focal point of beauty in the park’s northern part. Here, visitors can track mongoose on foot, during which one can observe and learn the rodents’ behavior.

Lake Katwe Explosion Craters: With beautiful views for hiking, the Lake Katwe Explosion Crater is on the north of the Mweya peninsula. It is the highest elevation point in the national park and offers a stunning view of the western rift valley of Africa, Mountain Rwenzori ranges, Kazina channel, and lake Goerge. While the craters are deemed extinct, sulfurous gas smells are still ejected by some of them. The main crater lake is Late Katwe, the salt content of which prevents any living being inhabiting it, but buffaloes, flamingoes, and elephants are a common sight.

Lake Katwe Salt Works: Lake Katwe, an ancient lake in western Uganda in the national park, is a saltwater lake. Several streams serve the lake, but it does not have any outlet, making it salty with high evaporation in the dry season. Located north of Mweya Peninsula, the lake creates salt rocks after evaporation, making salt mining a primary economic activity in the area. Apart from a chance to observe the salt works, visitors can interact with the locals, learn their lifestyle, and indulge in some local crafts from the markets.

Kyambura Gorge: Kyambura Gorge is known for the chimpanzees found here. However, there are only about 16 chimpanzees in the valley. Situated in the eastern part of the national park, the gorge was formed by the unruly waters of the river Kyambura. It is about 100 meters deep and a breathtaking sight perfect for a photo. The steep slopes of the gorge attract several animals like colobus monkeys, olive baboons, red-tailed monkeys, and flamingoes among others.

Kyambura Wildlife Reserve: Bordered by the Kyambura Gorge to the west, Kyambura Wildlife Reserve is yet another must-visit in the national park. It is located in the north-eastern part of the park and is home to a variety of wildlife, butterflies, primates, and much more. It links to the Kazinga channel with villages on its northern boundary and village plantations on its southern end.

Maramagambo Forest: Maramagambo forest is in the southern part of the national park. The scenic view, verdant tree canopies, and the various hiking and nature walk trails are the chief attractions of the forest. During a nature walk or hike, one will see the primates like baboons and monkeys and nocturnal primates like Pottos and bush babies. The forest is also famous for its bat caves with its big serpent inhabitants, which can be observed from a constructed viewing platform.

Kasenyi Plains: Neighboring the beautiful Lake George, Kasenyi Plains is located in the north-eastern part of the park. The plains offer the views of the endless savannahs dotted with antelopes and lions. Kasenyi is the breeding place of most wildlife and birds of the national park. Kasenyi Plains is one of the best places for photographers to capture great wildlife photos. The nearbyKasenyi safari campoffers stunning views of pride lions.

When it comes to accommodation in the national park, one hasIshasha Wilderness Camp, where the famous tree-climbing lions can be spotted. Located in the Southern Ishasha sector in the park, the wilderness camp is perfect for those who love the wilderness.

Yet another option is theKyambura Gorge Lodge. Located on the edge of the national park, this lodge offers the stunning views of the sunken Kyambura Gorge and rolling savannah.