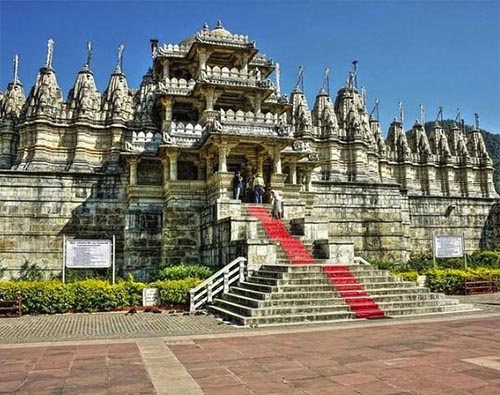 Amid the forest of Aravali hills, a magnificent monument stands tall known as the Ranakpur Jain Temple. Located approximately 90 km away from Udaipur in the district of Pali, this temple in Rajasthan sits graciously on the banks of River Magai. The Ranakpur Temple is regarded as one of the most brilliant architectural monuments of the Indian subcontinent. In addition to being a major pilgrimage site for the Jain community, the campus comprises various temples such as Chaumukha temple, Surya temple, Suparshvanatha temple, and Amba temple. The Chaumukha temple is the principal temple that is the house of the main deity Lord Adinath, the first Jain Tirthankara.

The Ranakpur temple comprises 1444 intricately pillars, 24 pillared halls accompanied by 80 domes which are borne by 400 columns. The architectural design of the temple is so unique that no two standing pillars are the same.

Ranakpur temple is one of the hidden gems of the country. Every marble on the wall wants to tell its story, every design of carving on the marble demands your attention at all times. The outer side of the temple is full of designs and pure art whereas the inside is calm and holistic. The presence of divine power is always felt at this monument, and here are just a few reasons why you should visit this holistic site.

How to reach: by air/ road/ railways

The Ranakpur temple is a three-floor monument with one magnificent story that every piece of marble speaks aloud.

The monument was built in the 15th century by Dhanna Shah, a merchant, and prominent minister. One night Dhanna Shah dreamt of a celestial vehicle and suddenly felt a wave of inspiration on his mind. The next morning he woke up with burning determination to build a temple designed as the celestial vehicle. To transform his dream into reality he went to the ruler of Mewar, Rana Kumba. Delighted by the vision, the ruler accepted his request with a condition that the structure must be named after the monarch.

Dhanna Shah began his search for someone who can aid him in transforming his vision into being. He went to seek help from an eccentric ascetic, Deepak, who crafted a sketch for the monument so flawless and divine as if it was drawn by the hands of the gods themselves. The work began in 1389 CE and it took 50 years of hard labor put by thousands of sculptors and craftsmen to make the Ranakpur Temple into being. The temple was established in the year 1437 CE. 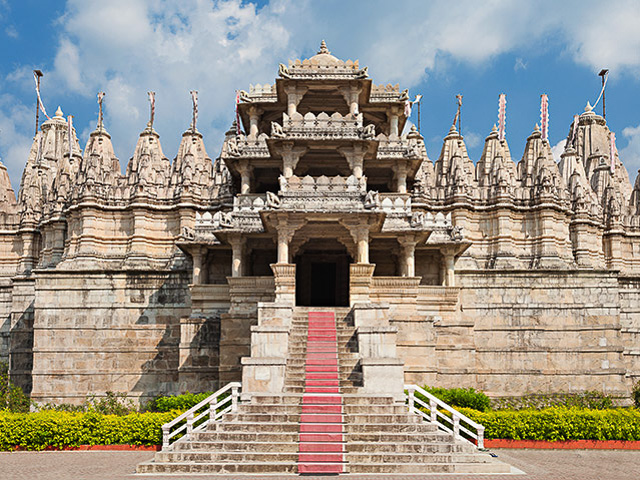 The Ranakpur Jain Temple covers an area of 48,000 sq feet. The land includes 29 halls and 80 domes which are supported by 1,444 pillars! The carvings on the white marbles are so beautiful that they never let a pair of eyes distract off of them. In the largest spire of the temple, one can find themself looking at a 6 feet tall, four-headed statue of Lord Adinath sheltered by a 108 headed snake with numerous tails. There are four heads of Lord Adinath which face four different directions. It is to be believed that they signify the pursuit of the Tirthankaras. 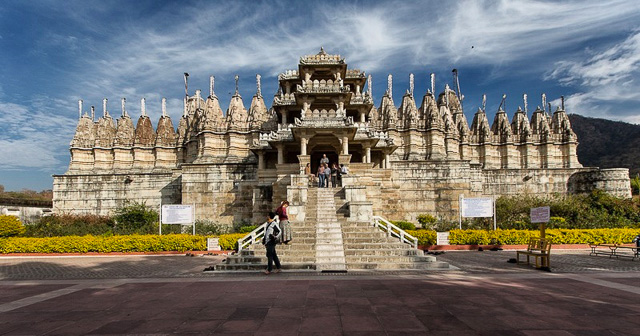 When you make a few steps into the temple and look straight up, your eyes will be mesmerized by the geometric designs and scrollwork, but then as you move your eyes 30 degrees you will get lost in another dimension of the carvings of the nymphs and the celestial maidens playing musical instruments on the ceiling. 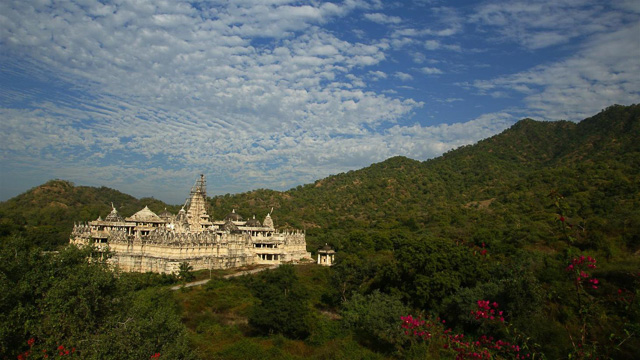 Kumbhalgarh (30 km from ranakpur): Under Rana Kumbha’s rule, Mewar reached its greatest potential. It was about the same time when he built Kumbhalgarh fort. This isolated fort is at a height of 1,100 above sea level. Kumbhalgarh is one of the most important forts of Mewar. The rulers used to retreat here in the time of danger. Despite its use for strategic purposes by the ruler, the fort is also praised for its scenic beauty.

Udaipur (90 km from Ranakpur): Udaipur, the city of lakes was the capital of the historic kingdom of Mewar. It embraces places where you can give your eyes and soul an absolute treat. Some of the places are City Palace, Jagdish Temple, Gangaur Ghat, Dudh Talai, Jagmandi, and Lake Pichola. 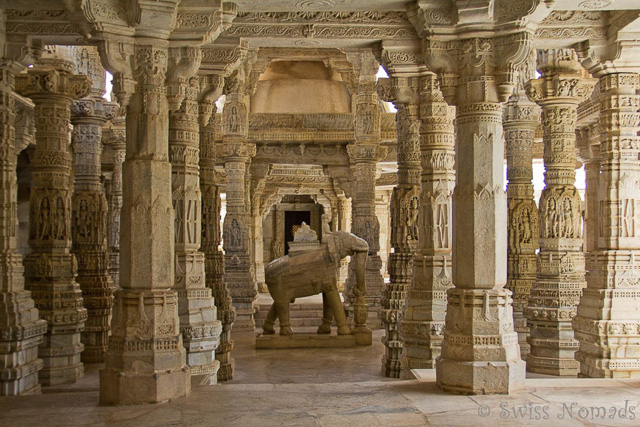 Fateh Bagh- Fateh Bagh is a successful attempt to relocate the fallen palace faithfully preserving the rich Rajput architecture. The ambiance will take you to another age of time into the lifestyle of the royal families. There are so many things that occupy your time within an instant: a swim at the pool, a walk alongside the orchids, and of course a visit to the Ranakpur Jain temples.

Mana Hotels-Situated within the valley of Aravallis, Mana hotel is only 5 km away from the Ranakpur Jain temple and 45 km from Kumbhalgarh Fort. Along with the ambiance and the pleasure, Mana rooms gives you a taste of wildlife. From villa ground to deluxe you will have a variety of rooms to choose from at Mana Rooms.