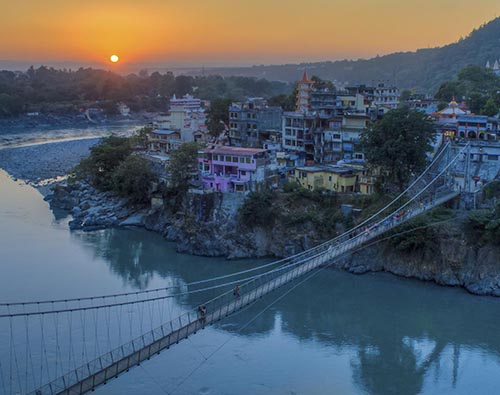 The meaning of Rishikesh is “God of all senses.” The city's name does equity to the city. Rishikesh can fulfill all the desires of an explorer ranging from thrill to tranquil. Every tourist can have a different purpose in mind. This old city stands up to all desires. As a cherry on the cake, it offers the tourists the taste of Garhwal Himalayas and the Ganges.

Envision going to a city that has holiness, peacefulness, flawless landscapes, historical spots, daring rides, and loads of culture. Rishikesh is such a city. It is also known by the names 'Yoga Capital of the Country' and 'Passway to the Garhwal Himalayas'.

Rishikesh has many spots that one must visit before ending the tour. These places leave the tourists in the city’s wonder most of the time. The spots include sanctuaries, Ganga Ghats, ashrams, yoga retreats, mountains, and so on. Rishikesh has both tranquility and thrill and thus something outstanding for each taste bud.

Tourists not only from India but from foreign too always visit Rishikesh. Tourists include pilgrims too and all of them coming from various walks of life. The varying cultures that the tourists carry with them and how they adjust to that of the city can be one way of life of the city. Rishikesh ashrams are the dominant reason for tourists visiting this place. This helps them learn Rishikesh Yoga and meditate. However, the Himalayas pull in nature lovers, rides attract those with a knack for adventure, and sanctuaries pull in the history sweethearts, etc.

Most historians hail that Rishikesh is 4000 years old. Skanda Purana mentions Rishikesh with the name Kedarkhand. According to it, a saint Rabhya Rishi’s Tapasya(penance)near Gange under the tree(most likely mango)moved Lord Vishnu. He disguised himself as Hrishikesh and met Rabhya Rishi as a reward. It did not take long for Kedarkhand’s name to change and become Hrishikesh. Over time, it became Rishikesh.

An alternate view based on Sthala Purana is that Rabhya Rishi remained near the bank as plants. The plants looked like the locks of his hair. Hence, the name Rishi(sage Rabhya Rishi)and Kesh(hair locks), Rishikesh.

A leader, Adi Shankaracharya, mainly religious during the contemporary period, visited Rishikesh. After his visit, Rishikesh became a pilgrimage and eventually a tourist destination. 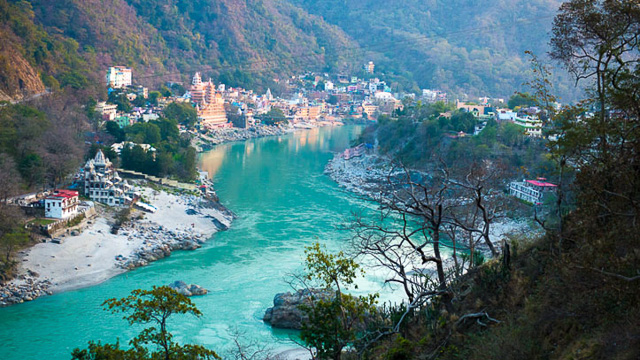 The culture of the city is more or less like any other city in India. The difference is that Rishikesh is one of the pilgrimages for the Hindus. The culture is thus dominated by the customs of the Hindus. All major festivals of the Hindus like Holi and Diwali are celebrated on grand levels here.

The locals speak Garhwali and Hindi. As it is a sacred place, non-vegetarian food is not available here. However, vegetarian food has a lot of variety and is delicious.

The people living in Rishikesh are very tourist-friendly. Tourists can be spotted throughout the year in Rishikesh. But, it is certainly overcrowded from May to June and October to January. Tourism here is one of the major sources of revenue for Uttrakhand. 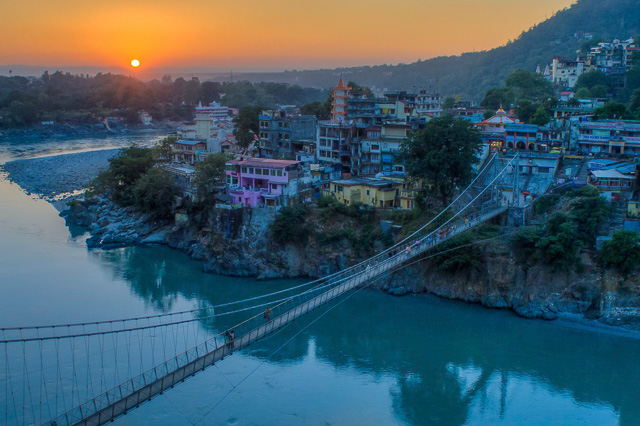 Laxman Jhula and Ram Jhula: As the name suggests, this jhula finds its significance in Hindu mythology. Laxman Jhula and Ram jhula is a hanging bridge that hangs over Ganga. As per Hindu Mythology, Ram and Laxman crossed Ganga at the same place as the bridges are built. They are major tourist attractions of Rishikesh.

Neelkanth Mahadev Temple: This Shiva temple is a sacred pilgrimage spot. It has a magnificent architecture. The name of the temple is derived from the mythological story that Lord Shiva drank the poison that turned his throat blue on the premises of this temple. The major rush for this temple occurs during Shrawan and Shivratri.

Triveni Ghat: Triveni comes from ‘tri’ meaning three. It's a confluence of the rivers Ganga, Yamuna, Saraswati. Worshippers take a dip in the river since they believe it washes away their sins and makes them pure. A maha-arti takes place every morning and every evening at the bank of the river. 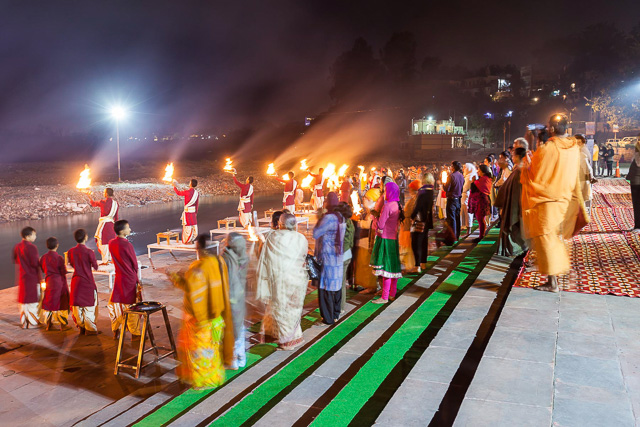 The Beatles Ashram: This Rishikesh Ashram was established by a Yogi who taught meditation. Back then it was Chaurasi Kutia. In 1986, the band Beatles stayed in this Ashram which explains the hype and the name. The other major attraction of this Rishikesh ashram is its dome-shaped construction and the graffiti works. It is a spiritually rich place.

Swarg Ashram: If one is in Rishikesh for mental peace then this Rishikesh ashram is truly Swarg (heaven). Practicing and learning Rishikesh yoga are major attractions for this ashram. It provides medical facilities to the saints and also the pilgrims. Moreover, it gives free education on religious subjects to tourists.

Rishi Kund: ‘Rishi’ means sage and ‘kund’ means pond, pond of the sage. The water is naturally hot. The most common belief regarding this is that it was a havan kund earlier. While some folk tellers believe that it was Lord Rama’s bathing place. It is within walking distance from Triveni Ghat. 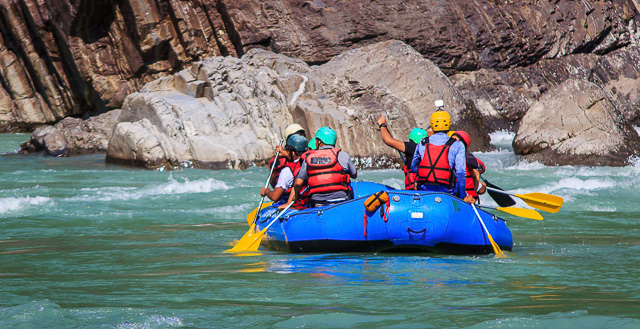 Haridwar: Haridwar is one of the seven pilgrimages for the Hindus. The Maha Kumbh Mela held after every 12 years is put up in this city. Travelers also visit Haridwar for its authentic cuisines and the ashrams.

Rajaji National Park: It is not only a National Park but also one of the two Tiger Reserves of Uttrakhand. Other than tigers, it has many elephants and leopards. One can visit it only during the months from November to June. On days the park is open, it follows strict visiting hours. However, one can book a full day Safari. 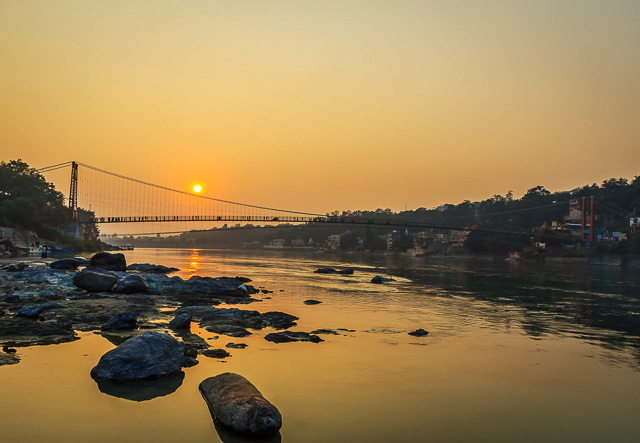 Evening Prayer Ceremony at the River Ganges (Triveni Ghat): Maha-Arti is held every morning and evening at the bank of rivers on Triveni Ghat. The arti here is like no other. It is so grand and beautiful that it can transport one to the state of nirvana.

Bungee Jumping: Bungee jumping can be ticked off from the list in Rishikesh. Rishikesh has the highest jumping platform across India. The instructors are well-trained to ensure safety.

River Rafting: Rishikesh is the best city for river rafting in India. Rafting length can be chosen from three options. It is open for visitors throughout the day (7 am – 10 pm).