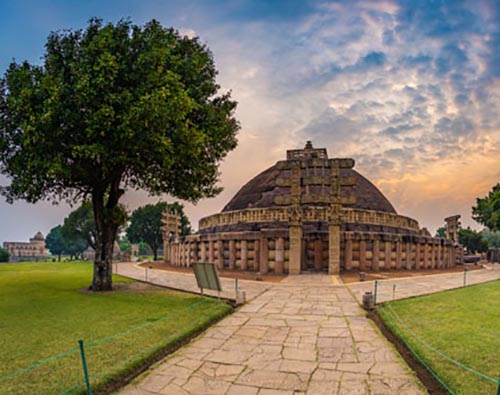 One way to revisit the younger days when you were inspired to draw invisible swords and make a mark in the world like Ashoka the Great is by journeying to the sacred Sanchi Stupa. Sanchi Stupa is a Buddhist complex in Sanchi town of Madhya Pradesh, renowned for its many Buddhist Stupas, built by Emperor Ashoka. Stupas are hemispherical domes that contain a central chamber, where the relics of Buddha or his followers were placed. The emperor had issued orders for the construction of stupas to preserve and preach Buddhist philosophy and doctrines. On your trip, you will realize that every stupa is an architectural masterpiece, narrating the glorious history of the Mauryan period.

What makes Sanchi Stupa a favorite visiting spot for history enthusiasts and archaeologists alike is that it is home to Mahastupa or the Great Stupa, a UNESCO World Heritage Site. Other highlights that make Sanchi special include the Gupta Temple, with its awe-inspiring temple architecture that is older by several generations, the gateways of stupas that showcase the life of Buddha using intricate carvings, monasteries, temples, sculptural wealth, and the monolithic Ashokan Pillar.

How to reach: By air/road/train

In ancient times, Sanchi was better known as Kakanava, Kakanaya, Kakanadabota or Bota-Sri Parvata. Sanchi Stupa holds a special place in the heart of every Buddhist pilgrim, for there is no other religious center that cherishes a close bond with the life of Lord Buddha, and thus the most commonly visited place for Buddhist worship in India. People forgot all about Sanchi after the 13th century, and it wasn’t to be rediscovered until 1818, when General Taylor, a British Officer found the half-buried town in good shape. Following the rediscovery, in 1919, the Director-General of Archaeology, Sir John Marshall gave orders for the restoration work.

Legend has it that Emperor Ashoka built 84,000 stupas in different parts of Asia, such as Bangladesh, Pakistan, Nepal, and Afghanistan, apart from India, and spread the ashes of Buddha among each one of them. It was the local population during the Satavahana period that donated money for the construction of stupas to satiate their thirst for spiritual relief and enlightenment. Furthermore, those devotees who donated to the cause would choose their favorite scene or incident from the life of Buddha and get their names inscribed on it. 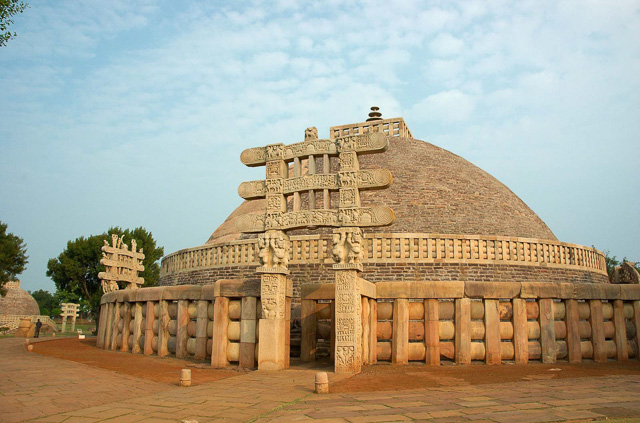 The Great Stupa: Surrounded by a railing, the Great Stupa at Sanchi has four gateways, featuring a variety of illustrations that narrate the life of Buddha. The most interesting characteristic of the sculptures here is the absence of Buddha in human form. Instead, Lord Buddha has been depicted symbolically by trees or inanimate figures such as thrones, wheels, or footprints.

Bija Mandal: Bija Mandal, home to the town of Vidisha, where Ashoka met his wife Devi, was erected in the 11th century. After its destruction in 1682, Aurangzeb, the Mughal emperor converted the ruins of the temple into a mosque and called it Alamgiri Masjid.

Built during the Shunga period, and complete with a balustrade and staircase, Sanchi Stupa 3 preserves the relics of Buddha’s disciples, namely Maha Moggallana and Sariputra.

The Great Bowl and the disciples: The Great Bowl carved out of one single gigantic block of stone, is considered to be a precious relic, once used as a storehouse for food, from where it was distributed to the priests and monks of Sanchi.

Every year, relics of the two chief disciples of Lord Buddha, Maha Moggallana and Sariputra are exhibited for devotees who visit the Great Stupa at Sanchi.

Udayagiri Caves: With its distinct U-shaped plateau, Udayagiri Caves are popular amongst history buffs for its twenty or more caves that illustrate Hindu, Jain scriptures and deities and the exquisite local art belonging to the 4th and 5th centuries.

The ASI Museum: The museum, originally set up by Sir John Hubert Marshall in 1919, established by the Archeological Survey of India near the Great Stupa at Sanchi is a treasure-trove of relics that belong to Sanchi’s Buddhist heritage. It includes sculptural artifacts such as the Lion Capital of Ashokan Pillar.

Gupta Temple: Built during the 5th century A.D., the Gupta Temple is an example of the classical temple architecture of India and is proof of the structural expertise of the designers of the Gupta period. The impressive plain-roofed chamber and pillars earned the temple the title of being a logically structured temple in all of India.

Chaitya: The Chaitya Hall of Temple 18 that is located right in front of the Great Stupa’s Southern Gateway is similar to the chaitya halls of Karla Caves in Maharashtra. The ornamental doorway has a display of Buddha with an oval halo. 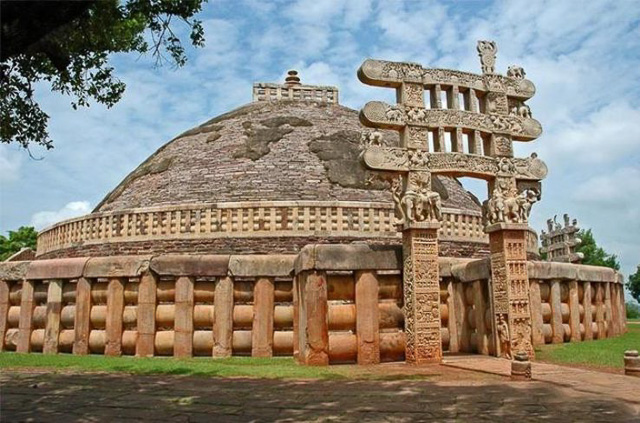 Bhopal (50 km): Bhopal, also called the City of Lakes, is a city of two cities- the old city and the new city. The old city of Bhopal is in the north, unique for its mosques, twisting alleys, buzzing bazaars, and crowded Chowks. Towards the South, you have the new Bhopal with plush restaurants and high-scale shopping complexes.

Bhimbetka (89 km): Legend has it that the word Bhimbetka derives from “Bhimbaithka,” i.e., the sitting place of Bhima from the Mahabharata. Bhimbetka is an archaeological treasure, known for its rock shelters, that was home to our ancestors, a millennia ago. The paintings on the rock shelters will engage you, for each rock has its story to share.

Satpura National Park: After a whole day of tough traveling, take a break to indulge in the spectacular scenes Satpura National Park has to offer, that would rejuvenate your senses, and prepare you for the next leg of the trip. Adjacent to Bori and Pachmarhi Sanctuaries, the park is the perfect getaway to a verdurous world filled with serenity.