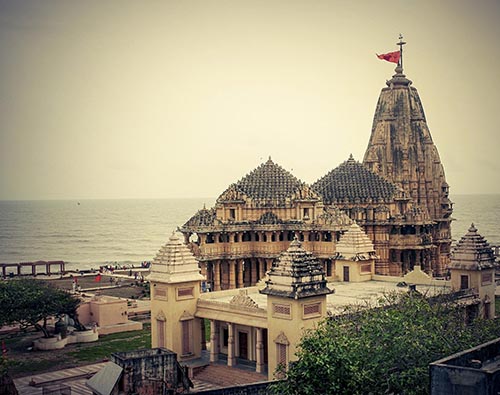 Somnath Temple is a renowned temple with a jyotirlinga shrine revered by the Hindu devotees all over the world. It is one of 12 Shiva jyotirlinga shrines in India. With a tumultuous history, the temple Somnath is a popular tourist attraction due to the strength it symbolizes and beautiful architecture.

Aside from the main jyotirlinga temple, Somnath is home to several temples that are often included in a pilgrimage. These temples are Veneshwar Mahadev Temple, Gita Temple, Surya Mandir, and Kamdev Mahadev Mandir. Aside from temples, Bhalka Tirth, Sarada Math, and Panch Pandav caves are other attractions near Somnath. One can also spend some peaceful time at Somnath Beach, located near the main temple.

After visiting the Somnath Temple, guests have the option of visiting the Gir National Park, the only reserve with Asiatic lions, and Diu, a charming island union territory. Located close to Somnath, tourists can explore both Diu and the National Park with a day-long excursion each.

Every year, hoards of tourists make their way to the phoenix-like Somnath temple, especially during the Kartik Purnima. As such, Somnath is well-connected to major cities in India. One can reach the pilgrimage destination by road through either private vehicles or transport or luxury buses. Alternatively, tourists have the option of taking a train to the Veraval Railway Station located just 5 km away from Somnath. With a history of rising from the rubbles and a peaceful ambiance, visiting the Somnath temple is an unparalleled experience.

The Somnath temple is believed to have been built by Moon Good, Soma, in reverence to Lord Shiva. The temple is supposedly built in gold by Soma, in silver by Sun God, Ravi, and afterwards in wood by Lord Krishna. It was the Solanki Rajputs that built the new temple with stone in the 11th century in Chalukya style. With its Shikhara 50 m tall, the temple's height was imposing. The temple Somnath, owing to multiple invasions by several rulers, has been destroyed and reconstructed several times over the years. In 1951, the last reconstruction of the temple began. 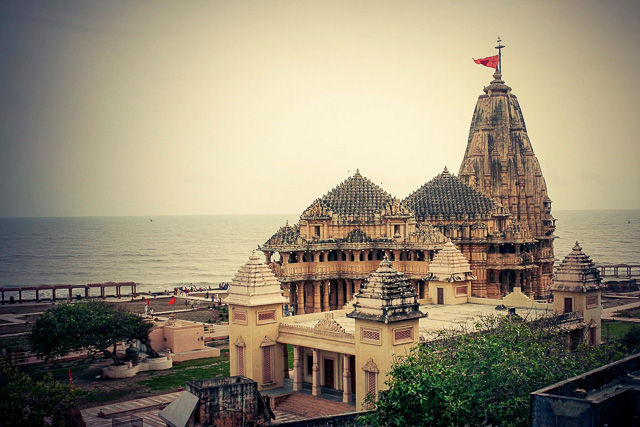 Shree Somnath Jyotirlinga Temple: Shree Somnath Jyotirlinga Temple, known as 'The Eternal Shrine,' is the chief attraction. With a tumultuous history of invasions for the riches, the temple has been destroyed and reconstructed several times. The temple Somnath, known for its intricate carving, the silver door, and central Shivalinga, attracts most tourists during the Kartik Purnima festival.

Somnath Beach: Located near the temple Somnath, the Somnath beach is the best place to enjoy nature's roaring silence. It is a must-visit when touring Somnath and visiting the renowned temple. Known for its rough tides, the beach is not suitable for swimming, however, you can enjoy the camel rides and light snacks here.

Veneshwar Mahadev Temple: Located opposite the Somnath Trust, Veneshwar Mahadev Temple is a temple with an interesting history and legend. It is believed that Mahmud Gazni attempted to kidnap Veni, the princess of the kingdom, after having failed to invade the temple Somnath. Hearing the princess' plea, Lord Shiva saved her from being abducted, thereby earning the title Veneshwar.

Bhalka Tirth: Bhalka Tirth is a holy spot that holds a significance due to a celestial event that took place here. This place is believed to be the spot where hunter Jara shot Lord Krishna with an arrow after mistaking his foot to be a deer's face. The Mahaprabhu Ji bethak along with the papal tree, where Lord Krishna is believed to have been sitting when he passed away, are worshipped here. 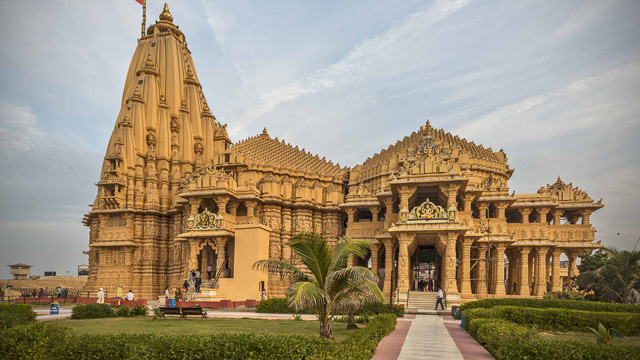 Panch Pandav Cave: Panch Pandav Cave, home to a temple dedicated to the Pandava brothers, is located on the summits of lalghati in Somnath. Rock cut pillows, beautiful carvings, and stupas along with the mythical legend make these caves a treat for history and architecture buffs.

Surya Mandir: Built during the 14th century, the Surya Mandir or Sun temple is located near the Sitala Mata Temple in Somnath. Dedicated to the Indian Sun God, Ravi, the temple's architecture features figurines of animals like lions. Apart from the idol of the Sun God, there are idols of two of his attendants.

Kamnath Mahadev Mandir: Located opposite the Triveni Sangam, the Kamnath Mahadev Mandir is a massive temple complex that houses several small structures aside from the huge temple of the main deity, Kamnath. Within the complex, there are two water bodies-- Dudhiyu Talav and a bathing pool, out of which the former is believed to have cured leprosy in King Mayurdhwaj.

Gita Temple: Built in the year of 1970, the Gita temple is dedicated to Lord Krishna. The temple has 18 pillars with a chapter of the Bhagavad Gita on each pillar. It is part of a complex containing smaller temples located at the end of the road leading away from the temple Somnath. 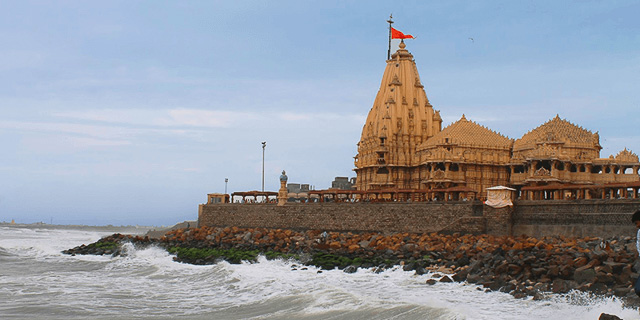 Diu: Diu, a beautiful island near the Kathiyawad coast, is a popular tourist place located around 88 km from the Somnath temple. Serene beaches, fascinating history, and unique blended cuisine are some of the main attractions of the union territory. Diu beach festival is yet another event that draws thousands of tourists every year.

Gir National Park: Located around 50 km and a road trip away from the temple Somnath, Gir National Park is the only reserve forest in the world where you can find the endangered Asiatic Lion. As such, the Park attracts several Lion lovers for jungle safari, allowed by the park administration between October and June months.