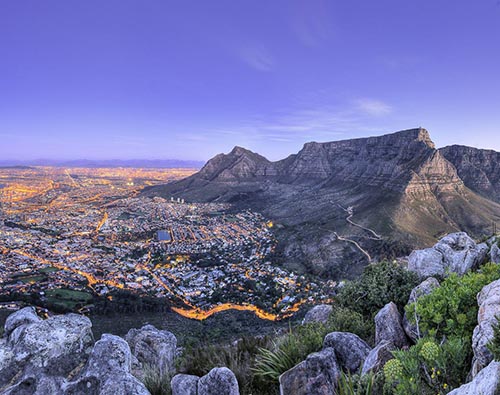 Cape Town is set between the mountains and the sea. With the iconic Table Mountain Cape Town rising above the city, long blonde beaches, and the glittering Atlantic Ocean, Cape Town flaunts its natural beauty with pride. This is heaven for those who love adventure. Tourists can take part in a host of indoor as well as outdoor activities such as biking, hiking, surfing, paragliding, cage dives with great white sharks, whale-watching trips, and a lot more.

Also known as the “Mother City” of South Africa, Cape Town used to be a European settlement, and so it has a rich and turbulent past. Visit Robben Island to witness where Nelson Mandela was incarcerated for 18 years. Stellenbosch is the foodies’ paradise.

Cape Point is a part of the UNESCO World Heritage Site and has one of the richest floral kingdoms in the world. Owing to its rich flora and fauna, Cape Town is regarded as ideal for what can be called as cape town safari.

Spend time with the penguins that waddle on the pristine beaches of Cape Town. Penguins are usually found in the Boulders Beach, better known as the Penguin Beach. The Boulders Beach is a beautiful white-sand beach located within the territory of the Table Mountain National Park Marine Protected Area.

Cape Town is the perfect blend of history with natural beauty. This is what makes it one of the most famous tourist places all across the globe.

Best time to visit: March to May/Sept to Nov

Cape Town was originally the home to Capetonians or KhoeSan people before the Europeans set foot in South Africa. This place has a turbulent history of the slave trade. After the arrival of Jan Van Riebeeck in 1652, the slave trade became rampant in the country. He brought slaves from South East Asia to work on the farms after he set up the supply station of the Dutch East India Company. The place has a grim history of colonization and apartheid. The Robben Island Prison is a landmark location in the anti-apartheid movement as Nelson Mandela was locked here for almost 27 years.

Today, South Africa has evolved into a melting pot of modern cultures and inspiring history. Cape Town has a vibrant culture which is a mix of Xhosa, Afrikaner, English, French, and Dutch lifestyles. The city boasts of its varied culture through the city’s diverse heritage. The people are artistic and use numerous platforms to showcase their art. Cape Town is home to numerous famous footballers, musicians, sculptors, and photographers. Theatre is also an important aspect of the city. Different festivals are celebrated in the celebration of wine, music, food, flowers, sports, arts, and the like.

Cape of Peninsula Tour covering Boulders Beach (Penguin beach), Cape Point: The Cape of Peninsula Tour includes a visit to the Cape Point which is a UNESCO World Heritage Site. It boasts of a variety of flora and fauna. On the same tour, tourists can go exploring Boulders Beach, popularly known as the Penguins Beach. It is an hour’s drive from Cape Town and shelters a breeding colony for more than 2000 endangered African Penguins Cape Town. Tourists can closely interact with the adorable penguins Cape Town.

The Heart of Cape Museum: This Museum opened in 2007 to honor the anniversary of the first heart transplant performed here by Christiaan Barnard. A tour of this museum gives valuable insights into the ethical implications of the time and the history of the recipient and the donor. It is a great place to learn about the history of a life-saving procedure.

Bo-Kaap: This vibrant locality is marked with rolling streets with brightly colored houses in the Cape Malay or Bo-Kaap locality. It is home to Cape Town’s Muslim community, who are mainly descendants of the Cape Malays. The Cape Malays were the slaves brought by the Dutch settlers from Indonesia, Malaysia, and other African countries.

Slave Lodge Museum: It is one of the oldest buildings in Cape Town and is managed by Iziko Museum. The museum provides valuable insights into the history of slavery in South Africa. It addresses several issues related to raising human rights awareness.

Hermanus for Whale watching and Shark Cage diving: Apart from the Big 5 Safaris, tourists can have a fascinating wildlife experience underwater as well in South Africa. The Southern right whales migrate to the waters of Hermanus, from July through November. The best places to witness these exquisite creatures are from Cliff Path, the Old Harbor viewing terraces, and the Sievers point. The annual whale festival takes place in Hermanus every September. Other activities in this area include water sports, fishing, swimming, and shark cage diving. Gear up for an up-close and personal encounter with the Great White Shark.

Garden Route: Expanding around 300 km, the Garden Route offers an astonishing variety of landscapes, wildlife, and activities. The coastal drive offers picturesque views along with isolated beaches, lagoons, ancient forests for hiking, and rivers for kayaking. This is one of the most famous places of tourist attraction in South Africa because of the wide variety of experiences it provides.

Wineland Tour: Wine from South Africa is considered to be among the finest wines in the world. Cape Town is right at the doorstep of the South African wine country. The Cape Winelands is one of the most scenic wine countries in South Africa. Indulge in the best wines with a stunning backdrop of the breath-taking sceneries.

Various types of accommodations are available in Cape Town. Choose what suits you the best from a wide range of luxury hotels, boutique hotels, and budget hotels available. Some of the most popular hotels in Cape Town are The Silo Hotel, Compass House Boutique Hotel, 21 Nettleton Cape Grace Hotel & Spa, and Only & Only Cape Town.