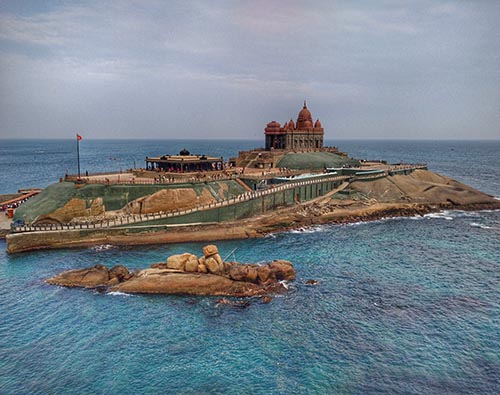 Also called Cape Comorin, Kanyakumari is considered the Southern tip of the nation. It is hence often referred to as ‘The Land’s End.’ A small town, with refreshing scenery, Kanyakumari offers an authentic South Indian experience filled with delicious food, heartwarming traditions, and the signature hospitality found down south. While Kashmir is considered the Northern ‘starting point’ to explore India, Kanyakumari is where India Ends. Hence it is popularly phrased that one would have to travel from ‘Kashmir to Kanyakumari’ if he wants to cover the entire nation.

Sunrise & Sunset views over the sea

The confluence of three Seas,

Named after the goddess Devi Kanya Kumari, this is a very important religious destination for Hindus. It is called a Shakthi Peetha and the Kanyakumari temple that has the shrine of the goddess draws in sizable religious crowds. The land is a witness of the Portuguese influence left behind during the British rule in India. In fact, the name Comorin was given by the Portuguese. 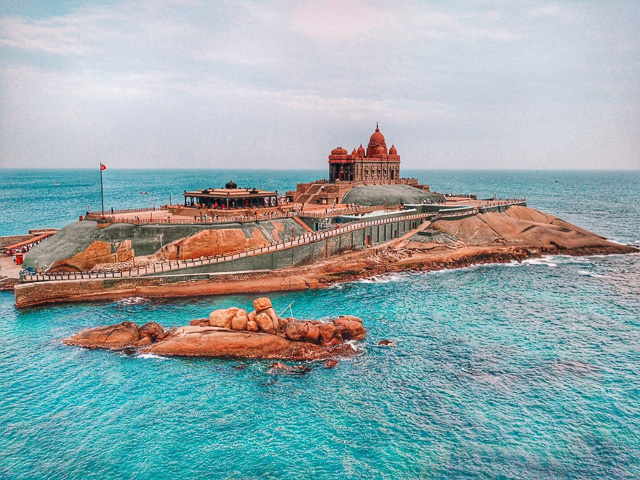 Deep-rooted in South Indian culture, the town is famous for its classical music and art forms. A lot of local folk dances are often performed during festivals and are an amazing sight to behold. A predominantly agricultural area, the common food eaten here is rice and fish. The prominent languages spoken here are Tamil and Malayalam. That being said, it is also a famous holiday destination, mostly because of its pleasant climate, and resort sin Kanyakumari are pretty full during holiday seasons. 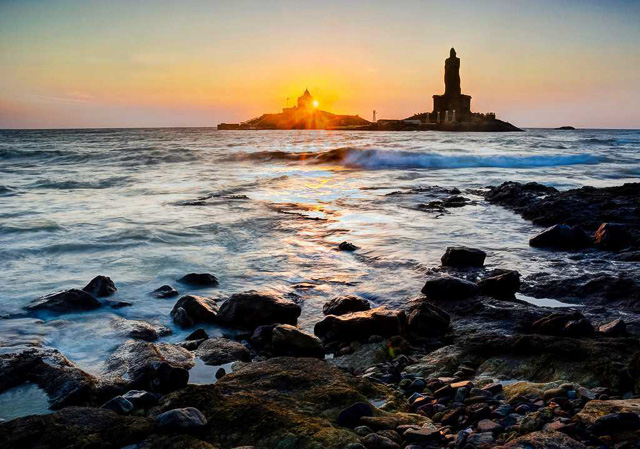 Thirparappu Falls: A landmark tourist destination, Thirparappu Falls is a great place to spend joyful times with family and friends. Not only does the scenic waterfall, which descends from a height of about 50 ft, create a frothy almost mystic appeal to onlookers, but the location offers activities like boating and swimming for those who go in groups making it a fun and enjoyable experience for all. The place also offers great nightlife.

Vivekananda Rock Memorial: Named after the great philosopher and scholar Swami Vivekananda, the legend goes that this is the place that he meditated on to attain enlightenment. To respect and honor this, the memorial was built, including the huge statue of Vivekananda. It is a popular sport for visitors because of the scenic view and experience it offers to them. People can take ferry rides to enjoy the calm beauty of the ocean. The place also has a museum featuring the literary works and the life of the great saint.

Thanumalayan Temple: Sthanumalayan Kovil, with inscriptions that date back to the 9th century, the Thanumalayan temple or Sthanumalayan Kovil is dedicated to the trinity of Hinduism- Gods Shiva, Vishnu, and Brahma. The word ‘Sthanumalayan’ stands for Sthanu which means Shiva, Mal which means Vishnu and Aya which translates to Brahma. The major attraction of this temple comprises the four pillars which carry the inscriptions of ancient musicians and musical instruments. They are hence called the musical pillars. The temple also contains a dance hall. 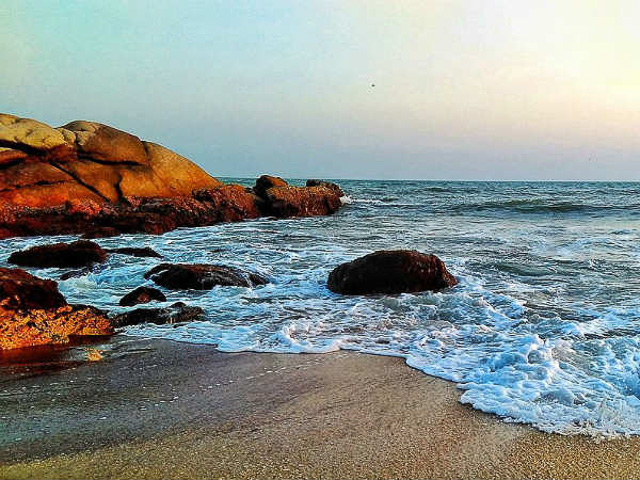 Thiruvalluvar Statue: The renowned Tamil poet Thiruvalluvar, whose work, the Thirukkural is taught to every Tamilian in the state not just as a part of the educational curriculum but as a way of life, is honored here. The statue is a sight to behold, with a height of over 130 feet. It is placed on three huge pedestals which contain the entire Thirukurral, inscribed on them. A unique observation is that in the statue, the poet can be seen pointing three fingers to the sky-they stand for Agam, Porul, and Inbam-the three paragraphs of Thirukkural. The statue is located close to the Vivekananda Memorial and can easily be reached via ferry travel.

Olakaruvi Falls: A popular tourist spot, Olakaruvi falls is an exotic waterfall located closer to Kerala and is considered among the best ones in the state. It is situated closer to Nagercoil, about 35 km away from the Kanyakumari city. The Falls descend from the hill ranges of the Western Ghats and there is the option of a small trek for hikers and climbers as well. It is about an hour-long climb but the view, of course, makes it worth the effort. The falls are also a great place for a peaceful lunch or a rest stop after a day-long tour.

Our Lady of Ransom Church: Considered an architectural marvel, Our Lady of Ransom Church is built in 15th-century gothic style, dedicated to Mother Mary. To represent the seven holy fruits, the church has seven doors and it is said that the Church Bell was imported from Italy in the 19th century. The wall carvings represent the coronation of Mother Mary and the twelve disciples of Christ. The main attraction of the church is the gold cross on the central tower. Since it is located close to the Kanyakumari beach, it is a great place to visit after a fun day at the beach.