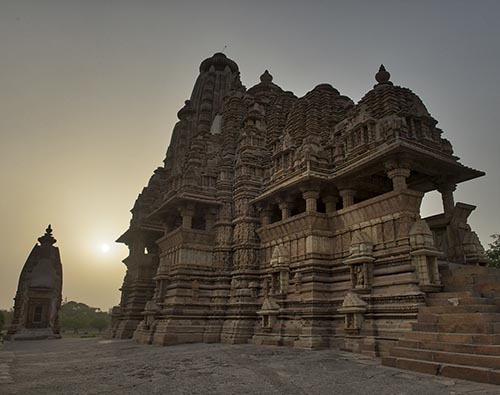 Khajuraho, a part of the Chhattarpur district of the state of Madhya Pradesh is known across the globe for its stunning architecture. The region several Jain, Buddhist and Hindu temples spread all across its length and breadth. The temples in the region are estimated to be built in various timelines, but most of them date back to between 950AD to 1050AD during the period of Rajput Dynasty. The region is on the list of the UNESCO World Heritage Sites. The sites are known for its architectural symbolism and also the erotic sculptures on them. Khajuraho has been ruled by several dynasties and the most important of them were the Chandela Rajputs. The region belonged to the Bundelkhand kingdom. Al-Baruni a famous Persian historian has mentioned Khajuraho in his works as the capital city of Jahahuti. Muhammad-of Ghazini invaded the region. Ibn-Batuta, a Moroccan traveller has also mentioned the temple town in his writings. The town was discovered and rediscovered by the British and was under her Majesties empire for a long period of time during which extensive drawing were made and preservation work started.

How to reach: By road from airport/railway station

Famous for: Khajuraho Group of Monuments

Khajuraho still has the essence of the Chandela Dynasty in its architecture and surroundings. The area falls near Bundelkhand, and hence, one will find Bundeli dialect spoken by the natives. The residents of Khajuraho are festive people, celebrating festivals such as Diwali, Dussehra, Holi, etc. with all vigor. Mahashivratri is the prominent festival of the area, and the locals await it every year.

Madhya Pradesh Kala Parishad organizes a week-long dance festival in February and March as well. This festival displays the diversity in the various folk dances of India, including Bharatnatyam, Kuchipudi, Odissi, Kathakali, etc. 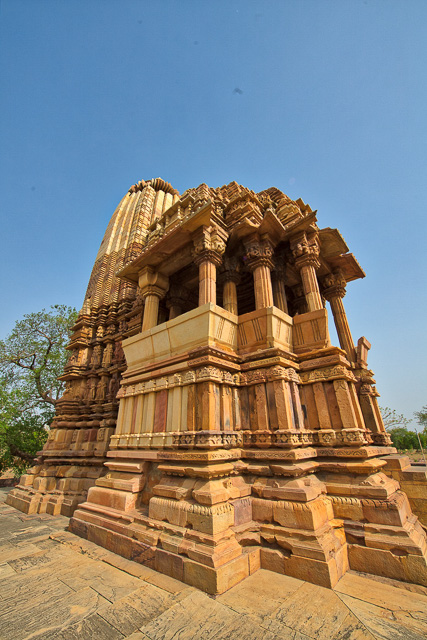 Khajuraho Western and Eastern set of temples - The western set of Khajuraho group of monuments is an array of the most magnificent temples and shrines. It constitutes the grand Kandariya Mahadev Temple, the humble Varaha Temple with its splendid pavilion, Devi Jagdambi Temple, which is decorated with highly detailed Khajuraho sculptures.A kilometer away from the western set of temples lies the eastern set. The eastern collection of temples are found in the ancient yet untouched village. The village has temples dedicated to Brahma, Vamana, and Javari. One can also spot the oldest images that can be found in Khajuraho on the statue of Hanuman.

Jain temples -The Chandelas in the 10th Century sponsored the construction of not only Hindu but also splendid Jain temples. The temples were destroyed during the reign of Mughals and forgotten. The ruins were discovered by the British, and the temples were restored to its original grandeur. The Jain temple complex consists of Parshwanath temple, Adinath temple, and Ghantai temple. The complex also has shops and a museum for the tourists. One can also behold the Shantinath Temple, which was built on the ruins of ancient temples.

Shilpa gram -Shilpa gram near Khajuraho brings you closer to the art and cultural heritage of India. The dance performances showcase various art forms, the crafts shops where one can find the perfect souvenir, the splendor of the ancient village, and lighthearted people who will woo the tourists. 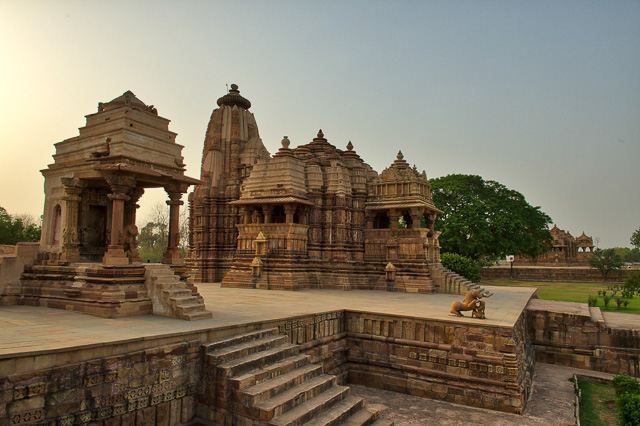 Excursion to Panna National Park - Panna is famous for its mines of emeralds. The national park has jaw-dropping views with its lush greenery and hills. A safari through Panna National park ensures you a sight of tigers and gharials, the reptile similar to crocodiles, only found in the Indian Subcontinent. The National Park has various splendid sights of waterfalls and majestic predators that can spark adrenaline in anyone’s mind.

Excursion to Raneh falls: -Almost 20 kilometers from Khajuraho, the majestic waterfall can be found by wading into the woods. The beautiful and shining pink sandstone, the clean waters of Ken river, the variety of birds, and the soothing sounds of the waterfall make it a must-visit for Khajuraho sightseeing. 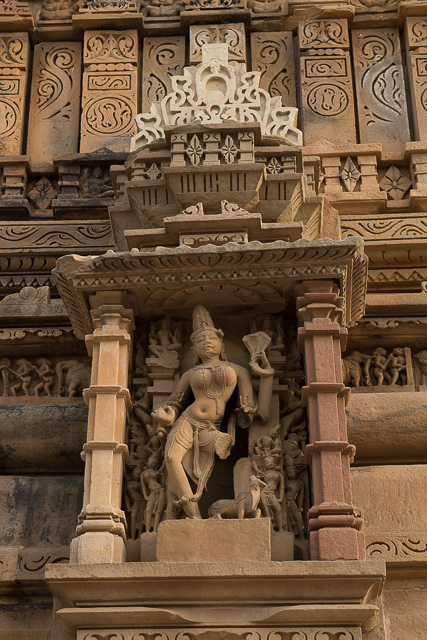 Khajuraho Dance festival: Khajuraho Dance Festival is a week-long celebration of different and diverse dance forms from all over India. Professional folk dancers come here to display and spread the art of their respective folk dances. Dances like Kuchipudi, Bharatnatyam, Odissi, Kathakali, Manipuri, Kathak, etc. will mesmerize with their beautiful style and precise movements.

There are cafes and restaurants near the temple complexes which offer all kinds of foods: from local to continental. One can enjoy the local tastes in the village of Khajuraho, and the hotels can provide for the specific choices of the tourists. 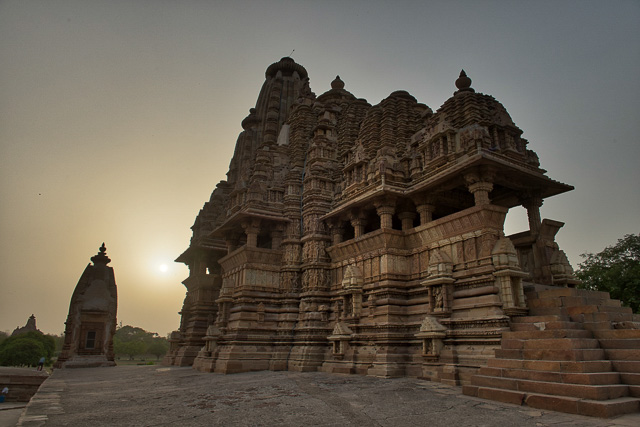 One can opt for the road route from any of the cities near Khajuraho, such as Satna, Jhansi, Bhopal, Gwalior, etc. If one wishes to take the route of the train, one can opt for New Delhi to Khajuraho train, which drops you at Khajuraho station, 5 kilometers away from the city. Another such option is from Varanasi to Khajuraho. For the air route, one can travel to Indore, Bhopal, Mumbai, or such and travel through the road from there. The Khajuraho Airport, 8 kilometers away from the city, is connected to New Delhi and Varanasi as of now. 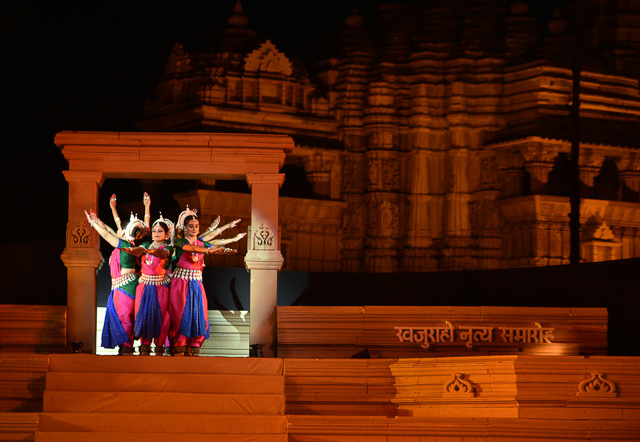 Khajuraho receives an array of tourists throughout the year and has a variety of luxurious hotels that suit the needs of everyone. They offer delectable local cuisine and all modern amenities. Here are our best suggestions:

The Lalit Temple View - The hotel is a five-star hotel with proximity to the railway station. It offers a splendid view of the Khajuraho group of monuments.

Raddison Jass - The hotel promises the best comfort after a winding day from Khajuraho sightseeing and traveling. It offers peace of mind with its amenities.

Ramada by Wyndham - The hotel is located near Panna National Park and offers all the luxuries one may need while traveling. The beautiful view of the forest fills the eyes with wonder.