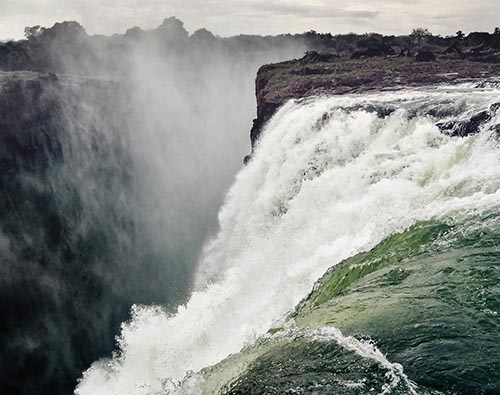 The largest sheet of falling water - The Victoria Falls - is formed as the mighty Zambezi River crashes over the basalt rock ledge and then drops 108 meters to form a very powerful whirlpool. Known traditionally as the Mosi - oa - Tunya, the roar of the falling waters can be heard up to a distance of 40 kilometers away from the falls. During the high water season, which usually lasts from February to July depending upon the rain, an amazing misty cloud is formed and floats above the Falls. This is the most unique scene that a guest can watch in their entire lives.

How to reach: by flight or by road

One of the most beautiful waterfalls of the world and also one of the greatest attractions for guests in Africa, Victoria Falls is located on the Zambezi River. The river which is also the fourth largest river in Africa, known for Zambezi River rafting is a defining border between Zambia and Zimbabwe.

The Victoria Falls is the only one in the world that has a length of more than a kilometer and a height of more than 100 meters. It is also considered the largest fall in the world. The roar of the falling water can be heard at a distance of 40 kilometers while the water spray from the large mass of dropping water may rise to a height of 400 meters and can be seen from as far as 50 kilometers.

A Scottish missionary and famous explorer of Africa, David Livingstone named this waterfall after Queen Victoria. Livingstone was the first European to cross Africa from south to north and he discovered this waterfall in 1855 while preaching Christianity in Africa. The fall was not very famous until 1905 when a railway to Bulawayo was built. Since then, the popularity of the fall increased exponentially and by the year 1990, 300,000 people were visiting the falls each year. Victoria Falls is also included in the list of World Heritage sites.

The water level of the falls varies throughout the year and reaches its peak in April, which is at the end of the rainy season. An average of 500,000,000 litres of water flows around this time and in October and early November, the water level drops at its lowest point.

Interestingly, in the dry seasons, the water level of the Zambezi River drops significantly making it possible for one to walk through parts of the fall but for the rest of the year, the Victoria Falls is a roaring lion.

The Victoria Falls country is neither Zambia nor Zimbabwe but it lies in both the countries. Even though the falls lie on both sides, which are Zambia and Zimbabwe, guests can easily cross the borders to explore the falls fully.

Some key highlights of these borders are as follows: 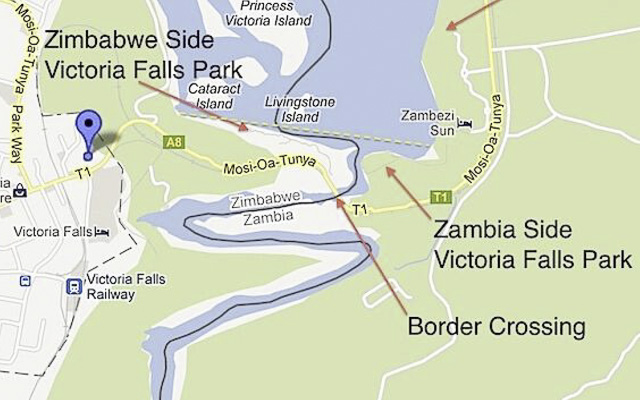 Iconic view of the Main Falls

Water flowing all year round

Most hotels are within walking distance of the Falls

A classic ‘guest town’ with restaurants, bars, and backpackers

Swim in the Devil's Pool during the low-water season

Devil's Pool: The Devil's Pool, Victoria Falls isone of the most extreme infinity pools in the world. This natural rock pool is situated at the edge of Victoria Falls and is only accessible when the water levels are low. The rock barrier is slippery and without a guide, things can get a bit extreme out here. This ensures to fill the tour with adrenaline.

Walk the Knife Edge Bridge: The Knife Edge Bridge is one of the best viewpoints to look at the Eastern cataract of the Victoria Falls. A large amount of water splashing and Crocs can be spotted in the water at the entrance to the Falls. Great chances of sighting a rainbow from this bridge.

See the view from Boiling Point: One can walk down the steps to the Boiling Point to see the falls from below. Bungee jumpers can also be spotted from this place. Later guests can hike up again.

Swim under the Falls: Guests can enjoy the fall from below by walking down to the Batola Gorge and then they can rent an inflatable raft to swim right under the rock pools of Mighty Victoria Falls.

See a Lunar Rainbow: The rainbow which is visible from the Knife Edge Bridge can be seen in the evening as a moonbow. This is possible when the moon is bright enough for its light to reflect on the water drops. This site is available for a few days only.

Explore by Microlight: A splendid view can be seen from the sky under the Microlight experience offered by the Batola Sky. The ride can go on for 15 or 30 minutes and include many amusing views.

Launch Cruise on the Zambezi River: A brilliant way to relax and savor the beautiful and Mighty River. A large number of birds, yawning Hippos, vervet monkeys, baboons, water monitors, Ellies, and massive crocodiles will be a common sight around here.

Helicopter ride over Victoria Falls: To look at the real potential of the mighty fall, one has to see it from the air. The massive size and grandeur of the Falls become more apparent from above. Crocodiles and Hippos will also be visible in the Zambezi River from up there. Circle over the Victoria Falls and then return to Maramba Aerodrome.

Mosi - oa - Tunya National Park: One of the most visited national parks around, this National reserve houses a large variety of natural beauty including a variety of wildlife.

Gorge Swing: The gorge swing is an activity for the adrenaline pumped guests. A free fall of 70 meters in the Batoka Gorge with a harness attached to the back is sure to make a thrilling experience.

Bungee Jumping: For adventurous guests, Bungee jumping is one activity that tops the list. Bungee jumping at the Victoria Falls involves throwing the body off the bridge straddling Zimbabwe and Zambia Border, diving headfirst into the canyon, and then bouncing back up. This activity is not for people with fragile hearts.

Being one of the mightiest falls of the world and spreading across the border of two countries, the location has invited a large number of establishments for guests. On the Zimbabwe side, the best places to stay are the Stanley & Libini Boutique Hotel and the Old Drift Lodge while on the Zambia side the Sanctuary Dissi & Chuma along with the Thorntree River Lodge are the best options for guest stay.