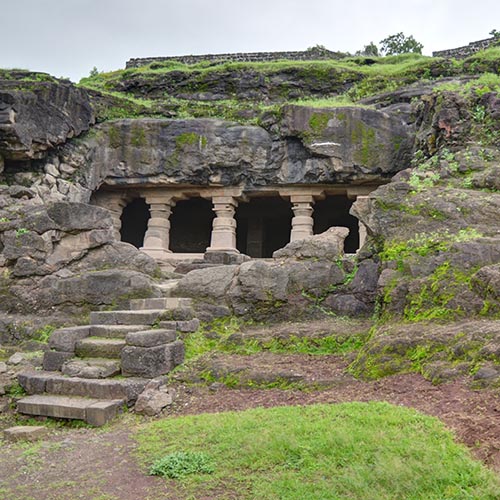 Caves have been an important part of India’s history and culture since times immemorial. There are many natural and man-made caves in our country that bear testimony to the country’s rich culture and heritage. There are numerous caves in and around Mumbai which date back to several centuries like the Ajanta and Ellora Caves. These stunning caves are mostly man-made and were used by Buddhists as a place of worship and shelter.

The Ajanta and Ellora caves are some of the main tourist attractions of India. Indulge in the outstanding architecture and rich cultural and historical value of the various caves in and around India. Tourists from all across the globe visit all year to marvel at the beauty of the caves and temples.

Once you arrive at Mumbai Airport, our representative will guide you to the hotel. Mumbai was formed by an archipelago of islands on the Arabian Sea and was named after the Goddess of the local fishermen, Mumba Devi. Mumbai is the city of dreams and is one of the most happening cities in the world. Being the commercial hub of the country, it is known as the city that never sleeps. Mumbai is famous for its mind-boggling network of local commutes and trains, dabbawalas, slums, and grooving nightlife.

Post breakfast, head out for Mumbai sightseeing. To the north of Colaba, is a region known as Fort. After the Maratha wars, a fort was built in this region by the British East India Company. However, this fort does not exist anymore but some colonial buildings still remain in the area. Some noteworthy ancient buildings include St. John’s Church built in the 19th century in the memory of the British soldiers who fought in Afghanistan and Sind.

Spend time in Marine Drive, one of the most iconic landmarks of the city. The arching promenade begins from Nariman Point and extends to Malabar Hill. Facing the Arabian Sea, the drive is lit up at night to form the famous ‘Queen’s Necklace’. These shimmering pearls of lights are visible even from airplanes.

The next stop is the Gateway of India which was built in 1911 as a symbol of welcome for King George V and Queen Mary. The grand structure facing the Arabian Sea is a prominent city landmark and is abuzz with vendors, hawkers, locals, and tourists. Soak in the sea breeze and enjoy motorboat or launch rides along the waters. The Apollo Bunder area lies towards the east and is popular for its vendors, walkers, tourists, and fortune-tellers.

Marvel at the beauty of the Hanging Gardens built in 1880. It is a green spot within the city located atop a hill. It offers picturesque views of the city.

After breakfast, proceed to visit the Elephanta Caves. It is enlisted as a UNESCO World Heritage Site. This combination of 5 Hindu caves and 2 Buddhist Caves is an architectural marvel.

These are rock-cut architectural structures depicting Hindu Gods- Lord Shiva and Parvati. The Elephanta caves are located on the island of Gharapuri. Explore the rest of the Gharapuri island and get to know the native Agri and Koli communities. Enjoy lip-smacking vegetarian and non-vegetarian dishes from the local cuisine.

Return to Mumbai and have lunch. Later proceed to visit other interesting caves like:

Mahakali Caves: Also known as the Kondivite Caves, the Mahakali Caves are located in Andheri and were built between the 1st and 6th century, during the Ashokan empire. The caves consist of Buddha figures, stupas, and scriptures in Pali. These caves are one of the most beautiful rock-cut monasteries in the country.

Kanheri Caves: The Kanheri Caves are located in the Sanjay Gandhi National Park and are a group of alcoves and rock-cut monuments. The caves illustrate the Buddhist influence on Indian art and culture. The caves are home to ancient sculptures and inscriptions dating back to the 10th century. The Kanheri caves are surrounded by the greenery of the surrounding hills.

Jogeshwari Caves: Situated in Jogeshwari west, these caves are some of the oldest constructions of Buddhists. It is built in the structure of caves and can be reached by a flight of stairs.

Mandapeshwar Caves: This 8th-century rock-cut shrine is dedicated to the Hindu God-Shiva. They were initially built as Buddhist Viharas, and sometime later they were occupied by the Brahmans. They are a popular tourist site.

Enjoy the evening at leisure and stay overnight in Mumbai.

Post breakfast, proceed to the airport and catch a flight to Aurangabad. The historical city of Aurangabad was founded in 160 by Malik Amber. Initially known as Fatehpur, it was renamed as Aurangabad after the Mughal Emperor Aurangzeb. It is also called the ‘City of Gates’ due to its fortified layout to protect its inhabitants against the Maratha invaders. Bibi ka Maqbara is one of the most well-known landmarks in the city. Often referred to as the ‘Taj of the Deccan’, the building was constructed as a rival to the Taj Mahal by Azam Shah, son of Aurangazeb, in memory of his mother Rabia-ud-Daurani.

The Ajanta and Ellora caves are the chief attraction of Aurangabad. The Ajanta caves were first built around the 2nd century BC and the second phase of cave paintings and sculptures began during the 5th and 6th century AD. Standing over the Waghora River, the Ajanta caves consist of 29 rock-cut caves and are known for their impressive paintings and rock-cut sculptures of the different forms of Buddha.

After this, visit the Daulatabad Fort, located 16km away from Aurangabad. It is located atop a conical hill and is well-known for its heavy fortification and strength. It is an extremely well-planned piece of architecture.

Return to Aurangabad and stay overnight.

After breakfast, proceed to the famous Ellora Caves. The Ellora Caves are enlisted as a UNESCO World Heritage Site and consist of a stunning assortment of rock-cut temples and monasteries of Buddhist, Jain, and Hindu origin. It was built between 550-1000 AD. The caves are built out of a single piece of rocks. Its most famous structure is the Kailasa temple, often referred as Ellora temple. This by itself bears testimony to the skill and craftsmanship of those who toiled to create the Ajanta and Ellora Caves.

The next stop on the trip is the Aurangabad caves. These are 12 rock-cut Buddhist caves set on a steep slope about 20m above the lower plains. The caves consist of Viharas or monastery, chaitya or the shrine, depiction of the figure of Buddha and sculptures of other Buddhist gods and goddesses.

Return to Aurangabad after an eventful day and rest.

Post breakfast, proceed to the airport for a flight back to Mumbai. In Mumbai, enjoy some shopping and explore the city until it's time to board your flight back home.