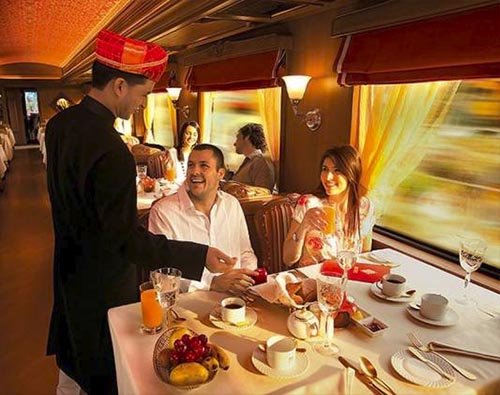 The Palace on Wheels train journey is one of the most exquisite components of a trip to India. This wonderful train journey takes you on a lush trail through the land of glamorous palaces, camels, and sand dunes. This tour is an experience that stays with the tourists for a lifetime. The journey is colorful and regal in nature.

The Palace on Wheels train is among the top ten luxury train journeys in the world. It offers a trip to all the magnificent and attractive locations of the Rajput era of Rajasthan, in just seven days. It takes you down the memory lane, narrating the glorious past of the Mughal era, especially the Taj Mahal, at Agra. The trip starts from Delhi, the capital of India which is famous for its rich culture and heritage and its historic monuments. The next place on the itinerary is Jaipur, popularly known as the Pink City of India. The tour takes you to Ranthambore/Chittorgarh which is home to the famous Hill Fort of Chittorgarh. The next place on the itinerary is Udaipur followed by Jaisalmer and Jodhpur.

The Palace on Wheels train offers a wide range of delectable cuisines available such as Indian, Continental, and Chinese. The Rajasthani cuisine at the Maharaja and Maharani restaurants is famous all over India.

Upon arrival at Delhi airport, a Wild Voyager representative will take you to your hotel. Delhi, the capital of India, is a perfect blend of modernity and old-city charm. With its rich culture and heritage, Delhi is home to some of the most magnificent monuments of the country.

Spend the afternoon at the Spice Market Tour.

Overnight stay in Delhi in a hotel.

Day 2: Delhi Evening: Board the palace on wheels heritage train

After an early breakfast, set off on a guided tour of Delhi. The tour starts from Raj Ghat - the eternal symbol of Mahatma Gandhi’s sacrifices for non-violence and Satyagraha.

Red Fort: This magnificent red stone fort was built by Shah Jahan in 1639. Take a rickshaw ride to explore the colorful alleys leading to the Jama Masjid. One is bound to fall in love with the beauty of Jama Masjid with its magnificent domes and minarets.

Marvel at the Parliament House, the seat of the world’s largest democracy, and Rashtrapati Bhavan. Enjoy the lush green Mughal gardens with its magnificent lawns and grand statuettes.

The next stop is the Qutub Minar. Even after so many years since its construction, the anti-rust properties of the structure amaze visitors.

A short distance away lies the world-famous market – Chandni Chowk. It was a celebrated market square in the 17th century and even today it is a bustling hub for shoppers. Visit the stately Humayun’s Tomb after this.

Our representative will take you to the Safdarjung Railway Station at 4:30 pm to board the Palace on Wheels train after the traditional welcome and check-in formalities. The train departs around 6:30 pm and dinner is served on request.

Post breakfast, our guide will take you to the Amber Fort, on the back of an elephant! The Amber Fort is resplendent and gorgeous in Jaipur. It is a beautiful blend of Indian and Mughal architecture.

Continue sight-seeing to the famous City Palace that sprawls over one-seventh of the area in the walled city, Jantar Mantar which was built by Jai Singh II, Hawa Mahal, or the “Palace of Winds”. The afternoon is free for you to relax at the spa, shop, or explore independently. Our representative will bring you back to board the train by 6:00 pm and depart. Dinner is served on board.

Day 4: Ranthambore/Chittorgarh on Palace on wheels

After an early tea at 6:30 am, our representative will take you to a jungle safari to the Ranthambore Tiger Reserve which is home to tigers, panthers, sloth bears, and hundreds of deer and bird species. Return back to the Station at 9:30 am and depart. Breakfast and lunch are served on board.

At 4:00 pm, the train reaches Chittorgarh and you will be taken on a tour to the marvelous Hill Fort of Chittorgarh. It is a UNESCO World Heritage Site spread over a huge plateau. Enjoy the light and sound program here to know about the glorious history of this fort. The representative guides you back to the station and the train departs post-mid-night.

Day 5: Udaipur- The City of Lakes on Palace on wheels

The train arrives at Udaipur at 8:00 AM. After onboard breakfast, our representative will take you to visit the City Palace on the bank of Lake Pichola. Enjoy the picturesque views of the numerous palaces, beautiful courtyards, gardens, arches, and other architectural marvels.

After some free time and shopping, our representative will guide you back to the train by 3 pm and depart. Dinner will be served on board.

Day 6: Jaisalmer- Golden City of the Thar Desert on Palace on Wheels train

Head to the UNESCO World Heritage Site, that is Jaisalmer Fort, after onboard breakfast. The Jaisalmer Fort is a fine example of the architectural brilliance of the 15th-century artisans. The series of majestic gates to the fort never fails to amaze the tourists.

A traditional Rajasthani Thali is laid out before guests for lunch.

At 4:30 pm, proceed for an excursion to the Thar Desert, and enjoy camel rides. Enjoy a cultural program and dinner at a 5-star hotel later. Return to the train by 10 pm and depart.

After breakfast, proceed to the Mehrangarh Fort, atop a rocky hill which soars 125 m above the Blue City. Visit the Umaid Bhawan Palace which is the residence of the royal family of Jodhpur, even today. Return to the train and depart by 3:30 pm.

Day 8: Bharatpur/ Agra– The City of Taj Mahal On Palace on wheels

Visit the Bharatpur Bird Sanctuary early in the morning to view over 375 species of local and migratory birds. Visit the Keoladeo Ghana National Park which is the nesting place for thousands of Egrets, Siberian Cranes, and other species of birds.

Return to the train and depart by 8:45 AM for Agra. On reaching Agra, our representatives will take you to the Agra Fort which was the seat of the Mughal Empire. After lunch, visit the Taj Mahal, the epitome of love built with flawless white marble and excellent architectural skills. Return to the train later and depart. Dinner is served on board.

The train returns to Delhi around 5:30 AM. Check out by 7:15 AM after having an early breakfast. Our representatives shall transport you to the airport on time for your flight back home. Carry a pocket full of wonderful experiences and memories as you go back.