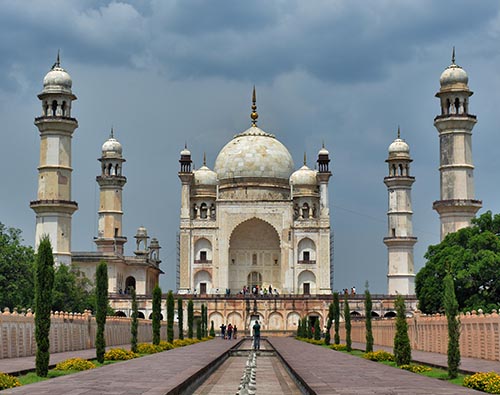 Named after the famous Mughal Emperor Aurangzeb, Aurangabad has always been a city in the limelight for its pleasant climate and beautiful surroundings. Also known as the “City of Gates”, the place is a wonderful sight to acknowledge some of the marvels of Mughal architecture, including the famous Bibi Ka Maqbara, designed in the > and plenty of other monuments, palaces and gates. The place is also flocked throughout the year by tourists from all around the globe, being the gateway to the popular destination of Ajanta and Ellora Caves, the famous caves which are also named as UNESCO World Heritage Sites. The city also offers a lot in terms of art and culture, being the hub for shopping exclusives such as the woven Himroo shawls and the Paithani sarees, and also metal goods, precious stones jewellery and other handicrafts.

How to reach: By road/flight/train

The City of Gates, which once had 52 gates out of which 15 have survived till date, has a very rich and fascinating history amongst the Mughal rulers and the later Delhi Sultanate. The very first Yadava kings of the region had set up their capital in this city and called it Devagiri (or Deogiri) and erected a fort here that was claimed to be unconquerable. Later, Ala-ud-din Khilji of Delhi captured this fort and renamed it to Daulatabad, which was later to be made the capital of the Delhi Sultanate ruler Mohammad bin Tughlaq, who transferred even the entire population of his capital from Delhi to Daulatabad. The move was a hasty one as he had not planned for the water supply in this new capital and he had to revert back to his old capital. The region fell into the hands of the local Muslim rulers for a while. Malik Amber, then found this city first and named it as “Khirki” making it the capital again. It was recaptured by Shah Jahan again, and Aurangzeb was made its governor, after whom it was finally named. Aurangzeb’s son built the famous Bibi Ka Maqbara in the honour of his mother, and there were also huge gates established here marking the strength of the Mughals in the Deccan. The most famous ones are the four gates facing the four different directions- Paithani Gate facing south, Delhi Gate towards the north, Khas Gate facing west and the Makai Gate (or Mecca Gate) facing the east. The region today is one of the 4 important cities of the state and an important region of the otherwise backward region of Marathwada. It is also the famous headquarter for Videocon, an Indian MNC. The city has seen a lot of rulers changing hands and its culture is a testimony to that.

Ajanta Caves: The Ajanta Caves is one of the most famous places of tourist interest. With its 30 Buddhist caves that date back to the 2nd Century, the Ajanta Caves attracts tourists from all across the globe and is a UNESCO World Heritage Site. It is an epitome of ancient architecture and is a brilliant piece of Indian art. The architecture, form, and shape of the caves reflect the history of the Buddhist monks using these caves for studying, meditating, and living in general. The beautiful paintings and murals on the walls reveal the secrets of royalty, art, and literature.

Ellora Caves: This UNESCO World Heritage Site was built by the Rashtrakuta dynasty of the Buddhist clan and the Yadav clan of Jains. The Ellora caves are located at a distance of 29 km from the city and are a must-visit for tourists. The numbered caves comprise intricate and detailed carvings on the walls, reflecting the culture of several dynasties. The architectural brilliance and historical significance of the caves attract tourists from all across the globe.

Daulatabad Fort: The glorious Daulatabad fort is considered to be one of the most undefeatable forts in India. Located around 11km north-west of Aurangabad, the majestic fort is built atop a conical hill, 200m above sea level. The strength of this fort is extreme, as it has three layers of defensive walls. A large pit of fire was built in the upper outlet to prevent the progress of enemies. There are numerous important structures inside the grand fort like Chini Mahal, Chand Minar, and Baradari.

Bibi Ka Maqbara: The beautiful Bibi Ka Maqbara was built by the Mughal emperor Aurangzeb for his wife, DilrasBanu Begum. This historical place is one of the most important places in Aurangabad. The spectacular architecture of the place attracts tourists. It was built on an elevated platform and is guarded by four minarets along its four corners. The walls are studded with exquisite marbles and ornamented with intricate designs and carvings. It is considered to be a symbol of immortal love. 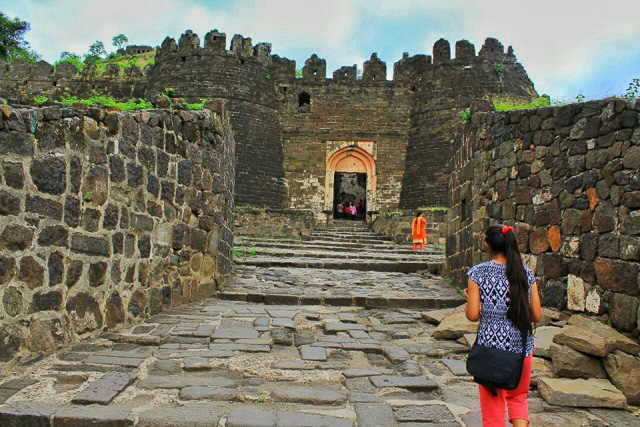 Aurangabad Caves: Located close to the city of Aurangabad, the Aurangabad caves are twelve rock-cut Buddhist shrines. Hinayana style stupas and Mahayana style artwork can be found on the walls of these caves. The intricate carvings depict Vajrayana Goddess, Durga, and Ganesh. Deities of the Tantra tradition are also carved on the walls. It is one of the most important tourist places depicting the 1st millennium CE Buddhist artwork.

Soneri Mahal: The Soneri Mahal was built in 1651-53 AD and is one of the finest examples of Indian architecture and craftsmanship. The interiors of the palace were once adorned with gold, and that’s why it was named Soneri Mahal. The palace was built in the Rajput style and is now fashioned into a museum that displays grand collections of artifacts, paintings, pottery, dresses, and the like. The lush green gardens surrounding the Mahal add on to its beauty and grandeur. 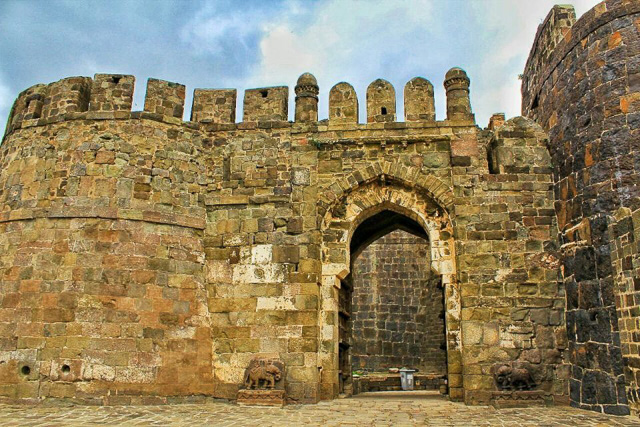 Aurangabad has a great variety to offer in terms of food, both at famous restaurants specializing in traditional local cuisines as well as roadside eateries. The traditional cuisine of the place is a nice blend of the Muslim art of cooking like the Hyderabadi dishes and with a south Indian mix of spices to it. Biriyani is as popular as its southern counterpart, while the exclusive dishes like Naan Qualia (a concoction of mutton with spices) and Tahri (similar to Biriyani) are some of the best meat savories you can find in India. Then there is the Marathwada cuisine that is the flavor of the place. And not to forget the famous paan of Aurangabad after a hearty feast. The city is also a shopping haven of the region, specializing in the traditional Khadi clothes and the Himroo and Mishroo shawls. Paithani sarees are also famous within the state and outside. Other shopping favorites include the Bidri pottery near Ajanta caves, handicrafts, and the organic fruits and vegetables from the famous Organic 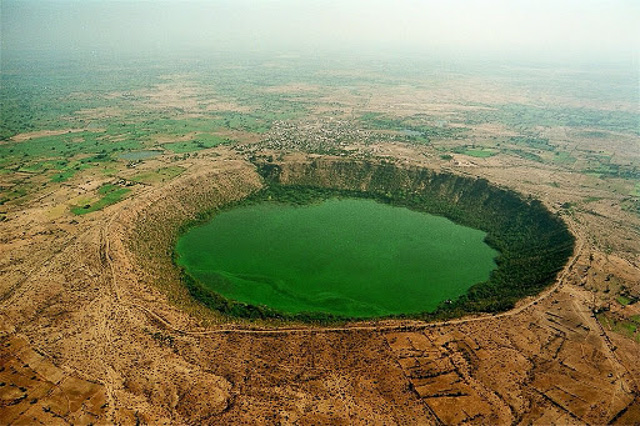 There are numerous hotels and accommodations to choose from in Aurangabad as it is one of the most popular tourist locations in India. Different types of hotels, offering a taste of the local cuisine and nestled in royalty, can be easily found in the city.

Welcomhotel Rama International: This hotel magnificently recreates the magnificence of the Ajanta and Ellora caves. Set amidst lush greenery, the hotel boasts of a warm and harmonious environment with effortless services.

Lemon Tree Aurangabad: Lemon Tree Aurangabad is located at the heart of the city and is easily accessible from important tourist destinations. It offers a luxurious experience to the guests while they indulge in modern accommodations with a royal twist. 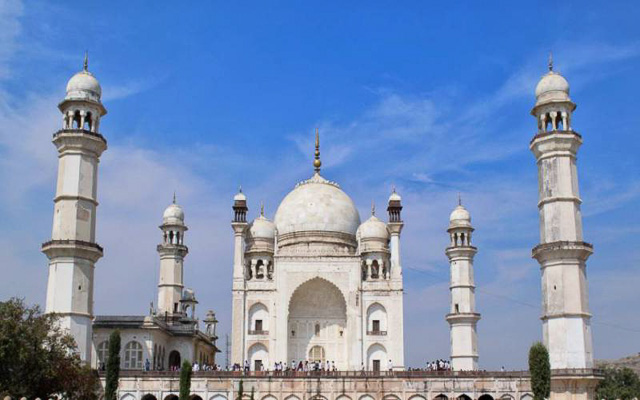 By road: Aurangabad is very well-connected with all the major cities of the state via road. It is approximately 400 km from the state capital of Mumbai, around 240 km from both Nagpur and Pune, and almost 200 km from Nashik. There are highway connections with all these places and also the route till the famous caves of Ajanta (107 km) and Ellora (29 km) is very comfortable.

By rail: Aurangabad has a major railway station where there are direct trains available to Mumbai via Nashik, Nagpur, Pune and even to other parts of India including New Delhi via Bhopal, Gwalior and Agra, and Amritsar via Panipat, Ludhiana and Jalandhar and even to southern cities like Hyderabad.

By air: Aurangabad has a fully functional airport where regular flights from Mumbai, Hyderabad, and Delhi are easily available.