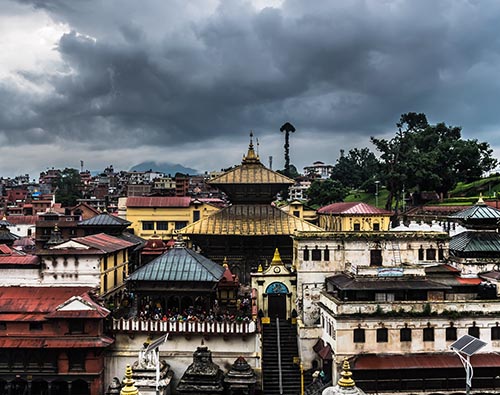 The Kathmandu City was founded in Kathmandu valley, after draining a large lake. Kathmandu is the bustling capital of Nepal. The chaotic capital of Nepal abounds in a busy city, rich in culture and history. With historic temples and royal palaces almost everywhere, it is a tourists’ heaven. Needless to say, the rich cultural and historical value is combined with majestic views of the Kathmandu valley. Kathmandu is a historic city that boasts of incredible diversity, amazing architecture, and rich historical value.

Kathmandu is the melting pot of historical traditions and the fast life of a modern metropolis. Kathmandu has seen rapid expansion in the last decade but has preserved its ancient traditions just the same. Endless ceremonial processions and events enrich the city life in Kathmandu. Kathmandu has been the home to Hindu and Buddhist cultures since times immemorial.

Kathmandu is home to three pilgrimage sites that are UNESCO World Heritage Sites- Pashupatinath temple, Swayambhu, and Boudha. Numerous festivals take place in these religious pilgrimage sites, thereby making Kathmandu a living village. It offers you the opportunity to travel back in time while also enjoying all the trappings of the 21st Century.

Best time to visit: Mar to May/Sept to Nov

The Newar people were the main inhabitants of the Kathmandu Valley. The foundation of Kathmandu dates back to the 12th century AD. It was originally known as Kantipur. The city flourished during the Malla dynasty and the majority of the architectural marvels of the city were built during this era. The valley was invaded by Prithvi Narayan Shah in 1768 who unified Nepal and made Kathmandu its new capital.

Every symbol and motif on the lavish ornamentation of Kathmandu’s temples and shrines has profound spiritual significance. They depict the city’s rich culture and heritage. Some highlights of Kathmandu’s divine culture are:

Kumari is Kathmandu’s living goddess who appears daily in the window of her palace.

During Indra Jatra, Seto (rice beer) flows from the mouth of the enormous mask of Bhairab.

Taleju Temple in Durbar Square opens for visitors only for a day during the Dasain festival.

The Narayanhiti Palace Museum was the last home of the Nepali royal family who were believed to be incarnations of Hindu God, Vishnu. 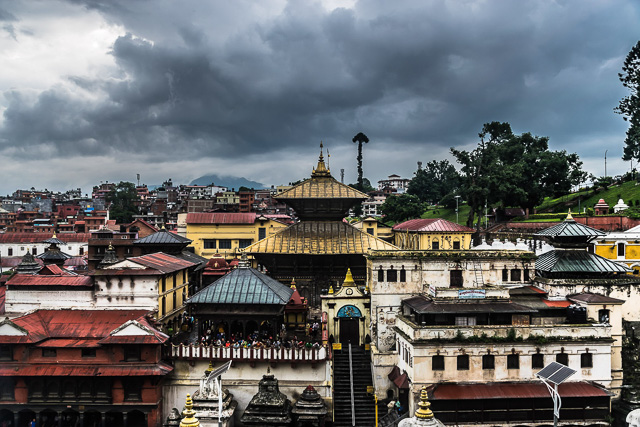 Kathmandu is home to beautiful works of architecture that dot the streets of Kathmandu valley. Some of the architectural marvels include:

Seto Machhendranath Temple, a fascinating time in the old city with Hindu and Buddhist motifs. 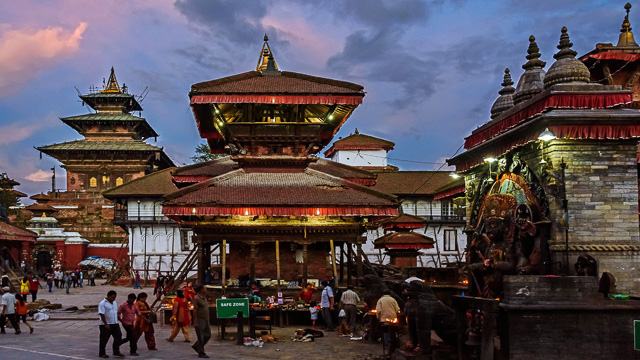 Durbar Square: Durbar Square is a UNESCO World Heritage Site. It is made up of temples, idols, statues, open courts, and fountains along with other structures. Admire the ancient Nepali architecture, Newari wood carvings, and historic traditions at Durbar Square.

Boudanath Stupa: Located 8 km east of downtown Kathmandu, Boudanath Stupa is one of the UNESCO World Heritage Sites. The 36 m high stupa dominates the skyline of the area and has countless monasteries surrounding it. It is the largest stupa in Kathmandu valley. On each side are the eyes of Buddha, signifying awareness.

Swayambhunath Stupa: Also known as the ‘Monkey Temple’, it is located on a little hillock of Swayambhunath in the northwest of Kathmandu valley. It is a hallmark of faith and harmony for centuries with Hindu temples and deities incorporated in this Buddhist site. It is one of the holiest Buddhist stupas of Nepal and is perhaps the best place to observe religious harmony in Nepal.

Budhanilkantha Temple: It is one of the most revered Vishnu shrines of the Kathmandu valley. The intricate stone sculpture of the sleeping Vishnu with its intricate artwork leaves tourists in awe of the magnificence of this temple. One can hire a taxi from central Kathmandu or bike all the way to Budhanilkantha.

Bhaktapur: Bhaktapur is an ancient Newari city and is home to beautiful pagodas, temples, narrow laneways, palaces, and warm-brick facades. It is considered to be one of the most beautiful cities in Nepal. It is listed as a UNESCO World Heritage site and is known for its artistry and crafts.

Patan: Patan was mostly constructed during the Malla period (14th - 18th centuries). It consists of a Royal Palace, and assorted Hindu and Buddhist temples and idols surrounded by public squares. It boasts of classic Newari architecture.

Royal Botanical Garden: This is one of the most peaceful and beautiful gardens in Kathmandu. The quaint gardens are perfect for walking or a picnic. One can experience the enormous variety of Nepal’s flora in the visitor center of the garden. It includes a cactus house, orchid house, and a tropical house. 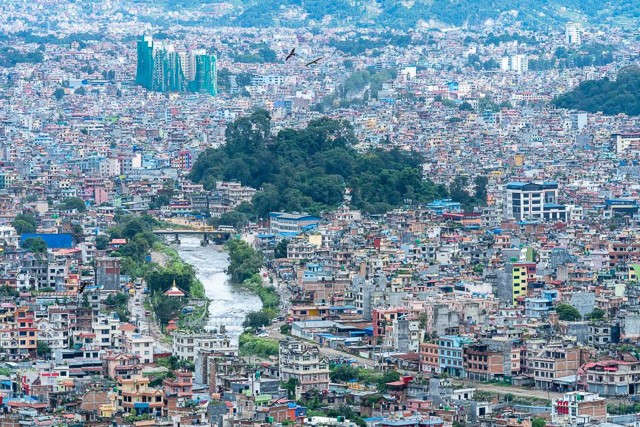 Mountain Flight: Indulge in a close look at some of the world’s highest mountain peaks including Mt. Everest. A mountain flight offers unparalleled views of the majestic mountains surrounding the valley. To the west lies the Dhaulagiri and Annapurna range while far in the east Everest, Makalu, and Kanchenjunga. 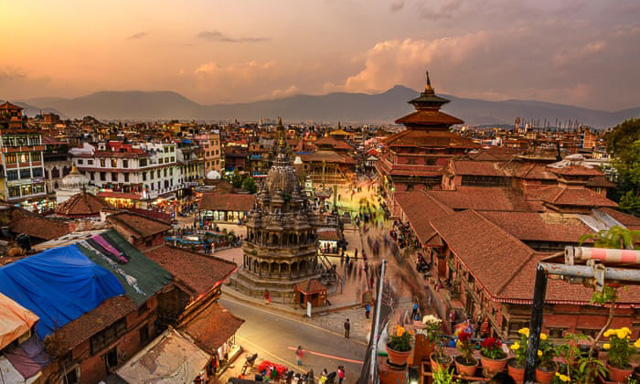 Momos (dumplings) and dal bhaat (rice and lentils) are some of Nepal’s most distinctive dishes. Kathmandu is the food capital as it is home to various international cuisines that are impossible to find elsewhere in the Kathmandu valley. The cuisines range from continental, Italian, Mexican, Chinese, Thai, Naga food, and many more. The local food has been influenced by Indian and Tibetan styles of cooking.

This is one of the best places for shopping for exquisite handicrafts and brilliant artwork. Tourists can shop for Nepali souvenirs like Nepali tea, the famous Gurkha knife or Khukuri, prayer wheels, stone carvings, thangkas and pauvas, pashmina, carpets, jewelry, etc. However, anything older than 100 years cannot be taken out of the country. 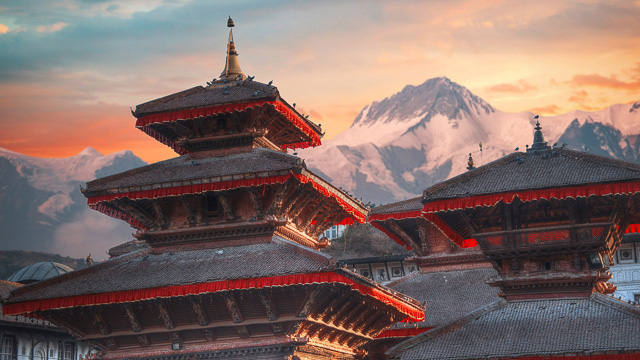 Kathmandu is one of the most popular tourist places across the globe. So, several accommodation options are easily available in this region. Hotels in varying budget ranges are available for tourists to choose what suits them the best. Some of the best hotels in Kathmandu include The Dwarikas, Hotel Yak and Yeti, and Baber Mahal, Vilas.