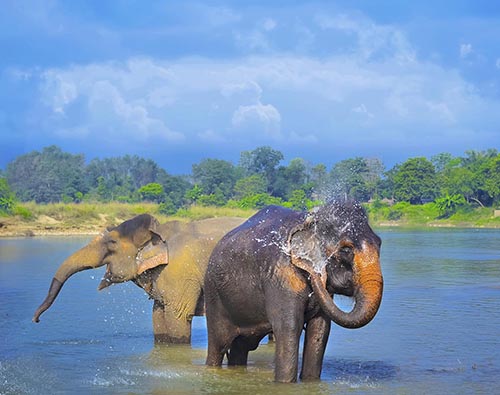 The Valleys and Wildlife of Nepal

Spend nine days in magical Nepal, starting from the Kathmandu Valley. In the Valley, you will visit some of UNESCO World Heritage Sites like Patan and Bhaktapur along with the famous Durbar Square. Your trip will then take you to Chitwan National Park to experience the wildlife of Nepal that includes the elusive Bengal Tiger, rare one-horned rhino, and leopard through game drives. You will also have traditional dinner at Nepali Chulo accompanied by Nepali folk music and dance forms. You will then enter the tranquil valley of Pokhara, where serene lakes and stunning mountains await you. At Pokhara, you will experience the spectacular sunrise over the Himalayas at Sarangkot and go on boating at Pokhara lake. After soaking in the serenity and beauty of the valley, you will return to Kathmandu to end your tour with some local shopping.

Upon your arrival at Kathmandu, you will be met and transferred to the hotel by one of our representatives, where you can relax for the day.

The Kathmandu valley being a political and commercial hub of Nepal is the most preferred for a majority of Nepal guests and has seven UNESCO World Heritage Sites. It was once a separate kingdom with Katmandu, Patan, and Bhaktapur cities, each with elegant palaces, beautiful temples, charming streets, and brick-paved courtyards.

In the afternoon, you will be visiting the historic seat of royalty, Durbar Square. With its old temples and palaces, the square is the epitome of the religious and cultural life of people here and the place of coronations of Nepal kings. Some of the interesting things to see here include Taleju temple, Nautale Durbar, Kal Bhairav (god of destruction) temple, Coronation Nasal Chowk, Gaddi Baithak, Big Drum, Jagannath temple, and the statue of King Pratap Malla.

Also at the square is a large wooden lattice screen that hides the gilded face of Sweta Bhairav, removed only during the Indra Jatra festival. Numismatic and Tribhuvan Museums inside the Hanuman Dhoka Palace are also on your visit-list today.

Today you have the option of going on an early-morning Everest Flight. During the one hour of the flight, you will get the uninterrupted and clear view of Mount Everest, and a panoramic view of Kathmandu Valley as the plane takes off. With a window at each seat, you will get breathtaking and otherworldly views and experience.

If the above option is not chosen, then you will proceed for sightseeing Kathmandu after breakfast at the hotel.

Your first stop is the Pashupatinath temple, which is one of the five holiest Shiva temples and has a double-tiered structure decorated with gold and silver. A black stone structure of Shiva's bull Nandi guards the entrance of this shrine. The entry is restricted to Hindus but the temple activities can be viewed from the Bagmati River.

The next stop for the day is one of the largest stupas in the world, the Boudhanath Stupa, which offers a stunning view. Surrounding the stupa at all times is a frenzy of activities like the beating of drums in the nearby monasteries, steady ebb and flow of worshippers, and Buddhist chanters.

At night, enjoy a traditional dinner with Nepalese music and dance at the posh Nepali Chulo. The menu here changes seasonally, so each meal here is the freshest and when accompanied by cultural performances of dance forms Lakhe, Maithili, Newari, and Tharu, takes the 3-hour dinner to a whole new level.

Day 3: Visits to Bhaktapur and Patan

Today, after breakfast, you will proceed to sightsee Bhaktapur and Patan, both of which are UNESCO World Heritage sites.

Bhaktapur, also known as Khwopa, is referred to as the "City of Devotees." It was one of the capitals during the Malla reign and stands on top of a hill a few kilometers away from Kathmandu.

The city has plenty of shrines, temples, palaces, and sculptures, all of which, including homes and streets, display wood and stonework designs. Bhaktapur is a delight to guests for the rich historical and spiritual references in the city.

Bhaktapur has a Durbar Square that is home to a collection of ancient temples and structures in both pagoda and shikhara styles. Some of the significant and beautiful architectural and design pieces in the square include window lattice engravings, statues, and sculptures.

Lying in the Bhaktapur Square, the Nyatapola Temple is a 100 feet pagoda structure with massive stone guardians at all step levels, guarding the shrine. From here, you can enjoy the splendid views of the city below and the scenery surrounding it.

Today morning you will catch a flight to Bharatpur.

Once there, you will be transferred to your accommodation within the Chitwan National Park.

Probably the best among Nepal's wildlife sanctuaries, Royal Chitwan National Park is the first in the kingdom. A sizable population of the rare Bengal Tiger graces the premises of the park and is the king of this jungle. Other wildlife that makes Chitwan popular are the rare one-horned rhino, leopards, bison, and wild bears. Graceful Gharials and Marsh Mugger, too, call the park their home. Additionally, lake Budhi Rapti, Lami Taal, inside the park, has several water birds and makes the national park one of the best birding sites in Nepal.

Post enjoying the game drives exploring the Nepal wildlife, you spend the night at Chitwan.

During your wildlife safari, you may come across some of 43 animal species that call the park home along with the rare Bengal Tiger, Asiatic rhino, leopards, and much more.

Overnight will be spent at Chitwan.

Today you will leave the Chitwan National Park and head for the tranquil valley of Pokhara via a domestic flight from Bharatpur airport.

After reaching Pokhara, you will be transferred to your hotel, here you can refresh and relax with the striking backdrop of the Annapurna range.

The Annapurna massif stretches from east to west and includes Annapurna I to IV and south. The highest among them is Annapurna I, but the Machhapuchhre (fishtail) dominates them all with its snow-capped needle-pointed peak.

Pokhara is the epitome of natural beauty, with panoramic views, beautiful lakes, and stunning peaks and is known as a center of adventure. This enchanting city offers an atmosphere of tranquility and magic with its serene lakes and the spectacular backdrop of the magnificent Himalayas. Pokhara is a part of an ancient trade route between India and Tibet, and even today, you can see the mule trains that bring goods from remote regions of the Himalayas, camped on its outskirts.

The town is home to three important ethnic groups that include the hardworking farmers, Magars, Gurungs, who are known to the world as Gurkha soldiers, and the entrepreneurial Thakalis. Pokhari’s climate is slightly warmer than Kathmandu with a day-time temperature of 15 and 35 degrees Celsius in winter and summer, respectively. Monsoon, here, starts from mid-June to mid-September and the town records the highest rainfall in the country.

Guest activities in Pokhara focus around two districts Damside (Pardi) and Lakeside (Baidam), which have an array of restaurants and hotels and are located to the south-west of the main Pokhara bazaar.

Today evening, you will enjoy the boating experience on the serene waters of Phewa Tal. It is the perfect way to unwind while catching a glimpse of the mountain on the reflection. You can rent wooden doongas for your boating trip at the boat stations.

Day 7 starts early with a visit to Sarangkot to catch the stunning sunrise.

Sarangkot is the best place for sunrise view over the Himalayas, where you will also be able to see the Annapurna range and the Machapuchare mountains clearly. Soaking in the sights of sunrise over snowy peaks is the highlight of this hill station.

Afterward, you will return to the hotel for breakfast and the rest of the activities mapped for the day.

Your first stop for the day is Devi's Fall, called Patale Chhango (Hell' Fall) locally. It is a remarkable waterfall situated on the highway to Tansen, around 2km south-west of Pokhara Airport. It is also known as Devin's or David's because according to the legend, a trekker named Devin or David disappeared mysteriously beneath the fall after being washed away by the Pardi Khola.

You will then visit old bazaar's Bindhyabasini Temple, the sacred and tumultuous river, Seti Gandaki, which runs underground the places, Pokhara's natural wonder House of Bats or Mahendra Cave, and the Pokhara Museum.

Following lunch, you will drive around the city for exploration and visit the lakes Begnas and Rupa, which is the perfect nature retreat, offering relative seclusion. They are located 15km from Pokhara and are divided by the forest Panchbhaiya Danda hillock.

You will finish the day with a visit to the Tibetan Monastery and then return to the hotel for an overnight stay in Pokhara.

Following breakfast, leave for the airport for a flight back to Kathmandu. Upon arrival, enjoy the rest of the day shopping in the city.

While shopping malls here sell branded items, the heart of the city lies in the handicrafts and stone and metal works the local markets sell. Nepali tea, singing bowls, paper-mache masks, and Gurkha knife are some of the souvenirs you can buy in such markets. However, keep in mind that artifacts older than 100 years cannot be taken outside the country.

You will spend tonight at Kathmandu.

Today is the last day of the trip and the day when you catch your flight back home or your next destination with the memories of your time in the country and Nepal wildlife.

Depending on your flight timings, you will be transferred to the international airport.