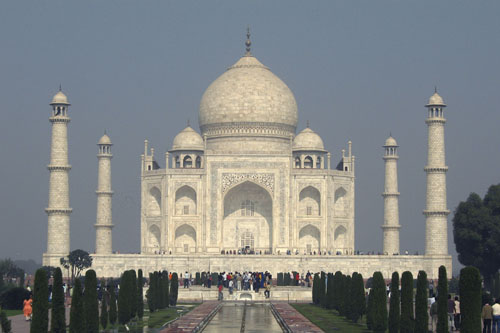 Quickly name 3 things that come to your mind when you hear the word, Agra? Taj Mahal visit, mouth-watering pethas, and a lot of tourists! If these are the only things you know then it’s high time that you go out there and explore Agra.

In addition to being the home of one of the seven wonders of the world, Agra is also a home for many other majestic sites, such as the Red Fort, Itimad Ud Daulah, or popularly known as Baby Taj, Mehtab Bagh and so much more.

Home to three UNESCO world heritage sites Taj Mahal, Fatehpur Sikri, and Red Fort, Agra is the land that served as a capital to the Mughal Empire and witnessed the eternal love of Emperors, Pride of the kings and power of the Mughal Empire. Agra was previously known as Akhbarabad and was made the eponymous seat of the original twelve subahs (imperial top-level provinces).

The importance of Agra’s history must always be embraced as it goes back thousands of years to the ancient times of MAHABHARATA when it was referred to as Agravana. Only by gazing at the beauty of this center, one can easily guess that the Mughal Dynasty and Lodi Dynasty have contributed immensely to the heritage of the city.

The city is not only blessed with artistic monuments but also with tradition and culture. The alleyways of the center are the perfect place to inherit centuries-old festivals of Urs Sufi Sahib, Holi, Diwali, Kailash Fair, Ram Lila, and many countless other festivals whose celebration will take you back in time. 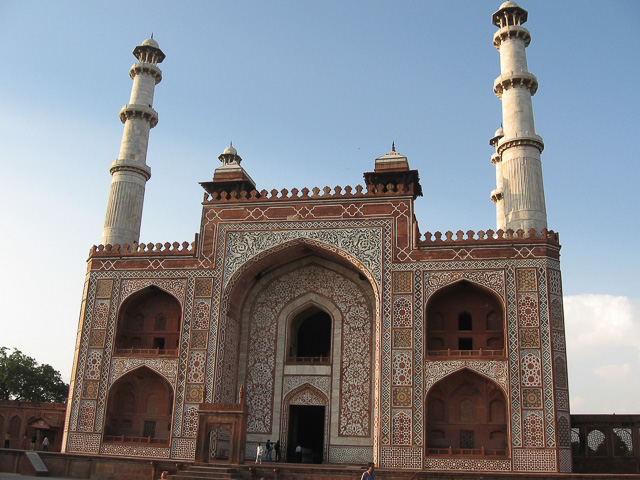 Taj Mahal is so famous, that it is said that it is “most famous for being famous” while the big, domed marble mausoleum is the most famous part of the monument. Taj Mahal, in reality, comprises buildings and complexes that extend over 55.5 acres that include tombs waterwork infrastructure, a small town of Taj Ganji to the south, and a ‘moonlight garden’ to the north.

The central feature of the building complex is a Royal Tomb cenotaph of Shah Jahan and Mumtaz Mahal, enclosed within a perforated marble screen.

Taj Mahal is great and beautiful because the rays of inspiration falling on the architecture are numerous.

Mughal tombs –the erection Mughal tombs to honor the dead was the subject of theological debate over several centuries. As the Taj Mahal was built as a tomb hence the dome was an integral part of the monument.

Paradise Gardens –the concept of paradise garden was brought from Persia by the Mughals. The symbolism of these gardens is derived from mystic Islamic texts describing paradise as a garden filled with abundant trees, flowers, and plants with water at the core.

Symmetry –symmetry and geometric planning played an important role in ordering the complex and reflected the trends towards formal systemization. 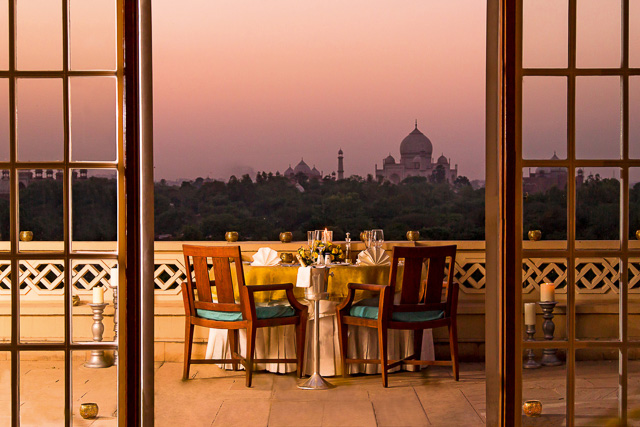 Taj Mahal– One of the seven wonders of the world and UNESCO world heritage sites, this piece of gem deserves every bit of praise and love it gets from all across the globe.

Agra Fort– Agra Fort was the central place of residence of the Mughal Dynasty until 1638, also a UNESCO world heritage site and beautiful architectural work. The fort was ingeniously built by the Rajput Dynasty and then renovated by Shah Jahan.

Imdadullah Tomb– Often described as “Jewel box” and Baby Taj, the tomb is located on the eastern side of the Yamuna river. 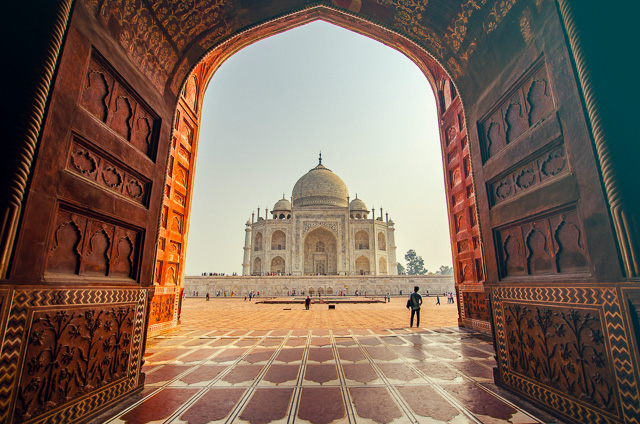 Fatehpur Sikri– the short-lived capital of the Mughal Empire between 1572 to 1585 during the reign of Emperor Akbar. The city was an Indo-Islamic masterpiece but was erected in an area supposedly for water shortages. So it was abandoned shortly after Akhbar’s death. The town is 40km west of Agra.

Sikandra Fort– Shikandara fort is the resting place of Mughal Emperor Akbar as the tomb stands in the middle of the vast garden surrounded by high walls on all sides.

Mathura and Vrindavan– Mathura is the birthplace of Lord Krishna and Vrindavan is the place where he grew up. These cities attract large crowds especially during festivals like Holi and Krishna Janmashtami. Mathura is located at a 4-hour distance from Vrindavan.

Bharatpur – Keoladeo Bird Sanctuary– The sanctuary was built 250 years ago and was named after the Shiva temple within its boundaries. This is an Avifauna shelter that witnesses thousands of rare and highly endangered birds such as the Siberian crane which comes during winter. The sanctuary is located at an hour distance from Agra.

Chambal Sanctuary– the sanctuary offers much more than glancing at the wildlife and here you can hop in a boat and join the River Safari followed by Camel Safari and then Jeep Safari. The sanctuary is only 2 hours away from your Taj Mahal Visit. 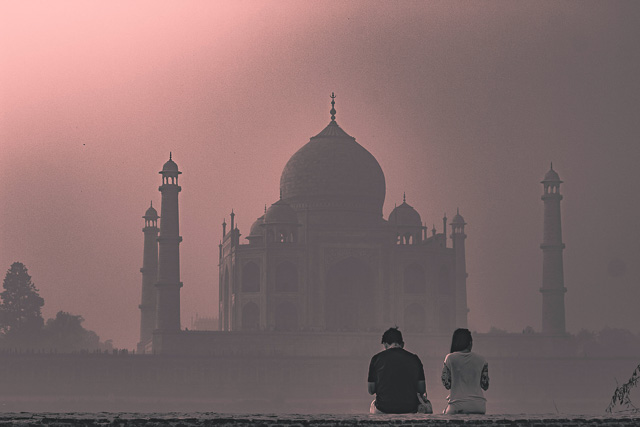 Heritage walk– It is the walk where you will get the opportunity to visit several monuments of the Mughal era in a rural setting. The stops will include Mehtab Bagh, Agra District, and Agra. This walk takes place on the opposite side of the Taj Mahal and is taken to Kachhpura village and ends at Mehtab Bagh.

Mohabbat-e-Taj – Kalakriti show- This is an all-time romantic love story portrayed by 80 brilliant and accomplished artists who take you to the Mughal era with their lively performance. The show lasts for 1 hour and 20 minutes. The Kalakriti theatre is also engaged in other art forms like music, poetry, dance, gestures, and social issues.

Taj Mahal on a Full moon night– Taj mahal is so beautiful that even if the sky becomes completely white, the monument would still look perfect. But to enhance your wonder, the building can also be seen during night time but only available 5 times a month i.e full moon night and two nights before and two nights after the full moon. 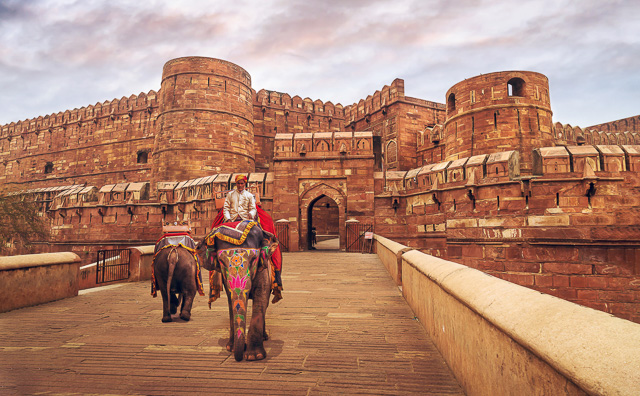 Here are some royal Taj Mahal Hotels with great ambiance.

The Oberoi Amarvilas hotel- Located just 600 meters from the Taj Mahal, this luxury is inspired by Mughal palace designs; with fountains, terraced lawns, reflection pools, and pavilions. From every room of Oberoi Amarvilas, one can see the Taj.

ITC Mughal- Sprawled over 23 acres of luxurious gardens, and near the Taj Mahal, ITC Mughal, a Luxury Collection Resort & Spa,is a contemporary metaphor for all the Mughals stood for.