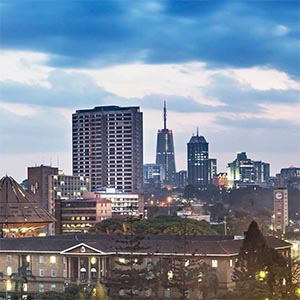 Kenya’s capital Nairobi is a dazzling mix of urbanity and raw wilderness. On one hand, the bustling young city offers a vibrant life while on the other, the thriving nature appears surreal. This intoxicating blend along with a rich culture and modernity has made Nairobi the fastest growing city in Africa.

When you think of safaris in East Africa, Kenya is always a go-to destination. But more specifically it is the iconic city of Nairobi. With luscious landscapes and the famous Nairobi National Park, this city demands to capture your attention. Nairobi is the safari gateway in Eastern Africa and the biggest air hub in the region. Nairobi does not boast the nickname ‘the safari capital of the world’ for nothing.

How to reach : Flight to JKIA

The city of Nairobi has a long yet eventful history. Originally, Nairobi was part of an uninhabited swamp. Its name comes from a water hole known to the Maasai tribe as Enkare Nairobi or cold water. The city originated as a colonial railway settlement in the late 1890s established by the British East Africa colonial authorities. With the arrival of the Uganda Railway, it became a grounding camp for the Indian workers working on the railway. During the 1900s, as the Indian bazaar was established in Nairobi, the city also transformed into a trading center. Soon, Nairobi attracted several migrants from rural Kenya, making it one of the largest cities in tropical Africa. However, it was not until 1954 that Nairobi was granted a city status and nine years later, became Kenya’s capital.

Nairobi is a melting pot of different races, tribes, and origins coming together. It is common to see the modern and traditional elements of Kenyan culture mix together. Various cultural and art performances are exhibited in Nairobi, which is also mirrored in its music, food, and literature.

David Sheldrick elephant orphanage – The Sheldrick Wildlife trust runs an orphan rescue and wildlife rehabilitation program. It is one of the leading conservation organizations in East Africa. The base of the trust is located in Nairobi National Park.

Giraffe center – On the edge of Nairobi national park, the Giraffe center allows visitors to meet these animals face to face. You can be at an eye level and feed pellets to the giraffes in the center.

Bomas of Kenya – Bomas of Kenya is an animated museum that celebrates the colorful culture of Kenya. It is one of the best places to learn about the art, crafts, lifestyle, and music of each tribe. In the large theatres, various teams perform traditional dances and songs.

Kenyatta International Conference Centre – This is an eye-catching landmark and an internationally acclaimed venue for conferences, exhibitions, and meetings. The distinctive cylindrical structure provides a breathtaking 360-degree view from its rooftop deck.

Railway Museum – The railway museum in Nairobi celebrates the significant history of the railroad in Kenya. The museum boasts a varied collection of train and ship models.

National archives – The national archive of Kenya is an important building highlighting the country’s history, politics, and arts.

Mombasa – Mombasa is located on Kenya’s eastern coast and is the second-largest city in Kenya. The most famous spots in Mombasa are its spectacular beaches, interesting cultural centers, and magnificent national parks.

Malindi – Situated in the northeast of Mombasa, Malindi is a serene coastal town. Some tourist attractions in the town include the pillar of Vasco da Gama, the marine national park, and famous beaches.

Maasai Market – The Maasai market in Nairobi is recommended for handicraft shoppers. From African paintings to stunning craftworks, this endless market is well known for its cheap rates. The market is evident for Nairobi’s shopping culture and is one of the best place to interact with local buyers.

Rolf’s Place – Rolf’s Place is a cliff mansion located in the Southeast area of Nairobi National Park. This region has a suspension bridge that offers beautiful views of Mount Kenya, the Karen Area, and the Ngong hills.

Maasai Ostrich farm – This ostrich farm is the largest hub for ostrich farming in East Africa. It is home to thousands of ostriches distinguished into two breeds: the Somali and the Maasai Ostrich. Visitors have the opportunity to ride the ostrich with the help of trained professionals.

One of the best ways to explore Nairobi is to try the street food in the city. Nairobi is popular for its delectable nyama choma, Kenyan pilau, ugali, Sukuma wiki, chapatis, and kachumbari, and maize. Nairobi is also an international city that contributes to global cuisines. From authentic Italian pasta to Japanese sushi, the food culture in Nairobi is distinct. The notable places to dine in the city are Carnivore restaurant, Mama Oliech restaurant, Kenyatta Market, Hashmi barbeque, Nyama mama, and Java house.

Without a shopping expedition, you cannot enjoy your trip to Nairobi. The most famous places to shop in the city are the kazuri beads factory tour, Maasai markets, Nairobi flea markets, the Two River Malls, Village market, and City market. For handicrafts, Utamaduni crafts center, and Spinner’s web have various items on display.

The endless choices of accommodation in Nairobi cater to every type of traveller. They vary from lavish hotels to authentic camps and lodges, with different price ranges. Some places to stay include:

The Sarova Stanley hotel – It is the city’s oldest hotel, established in the year 1902. The hotels provide upscale accommodations and services making your experience as comfortable as possible. The hotel is situated close to popular attractions such as the Railway Museum and city hall.

Giraffe Manor – This is a 1930s manor house set against a location surrounded by various wildlife species. Moreover, it also houses a herd of Rothschild giraffes.

House of Waine – House of Waine is a large colonial-style villa located in the picturesque yet quiet suburbs of Karen. The villa is filled with antiques and decorated in a traditional manner. It also has easy access to Nairobi national park.

Nairobi Serena Hotel – Nairobi Serena hotel is an elegant option and provides a sophisticated experience. It is located at the edge of Central Park and is surrounded by luscious gardens. The Karura forest reserve is a mere 15-minute drive from the hotel.

Anga Afrika - This is a luxury camp located in a secluded spot and well-positioned to nearby national parks of Nairobi. Only having six tents, they come attached with modern amenities including private terraces.