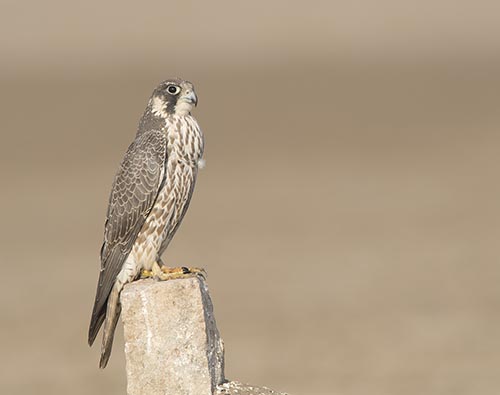 Explore the best birding and wildlife destinations in the Indian state of Gujarat on the Gujarat Birding and Wildlife Tour. Created for the conservation of the Blackbuck, the Velavadar National Park also houses the Indian Grey Wolf and the Golden Jackal that are the main predators. Apart from these, Bengal Fox, Indian Hare and Nilgai along with many species of birds like Black-winged Kite, Shikra, Stoliczka’s Bushchat, Rufous-tailed Larks, Desert and Variable Wheatears, and Rufous-tailed Shrikes can also be seen. Common Crano and waders can be spotted on the Alag River.

The Gir National Park, famous for it's Asiatic Lion is also a delight for birdwatchers. It is home to around 350 bird species that includes both resident and migratory birds along with birds of prey, vultures, owls, nightjars, ducks, kingfishers, herons, egrets, flycatchers, and many others.

Situated on the outskirts of Jamnagar, Khijadiya Bird Sanctuary is an excellent bird watching area due to the presence of both seashore and freshwater birds such as Indian Hare, Jungle cat, and Nilgai.

The Rann of Kutch, a seasonally marshy region located in the Thar Desert geographic region dries up in the winter sun and is interspersed by lagoons and small islands of vegetation called ‘bets’. The southeast portion of the Rann is home to the rare and endangered Indian Wild Ass or “Khur”. Also known as a birding paradise, the Rann houses numerous dryland bird species like Grey Hypocolius, sandgrouse, larks, plovers, warblers, and shrikes along with the highly endangered Macqueen’s Bustard, a winter visitor. The saline desert also serves as a perfect hunting ground for many species of raptors, like eagles, falcons, and Long-legged buzzard. One can also spot Common Cranes, Greylag Geese, and many other waterfowl species in winters and can enjoy wetland birding at the lakes and marshes around the Rann.