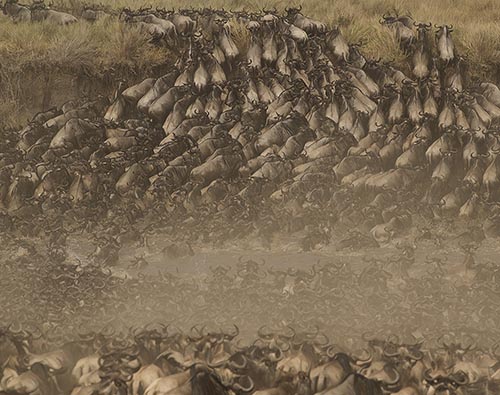 Kenya, the famous country of East Africa is famed for its vast wildlife preserves and scenic landscapes. Its protected areas encompass a wide variety of dynamic biodiversity. Kenya’s coastlines are surrounded by the Indian Ocean. This in turn displays beautiful Kenyan beaches with white sands and turquoise waters. Yet, one of the highlights of touring the country is enjoying a Kenya migration safari.

Every year, wildebeests migrate from Tanzania to Kenya’s Masai Mara in search of water and grazing ground. This journey spans more than 3000 kilometers and is an incredible spectacle of nature. Nature lovers would not want to miss out on this wonder of nature. A visit to Masai Mara will give you a fantastic wildlife experience. You will also feel the remarkable culture of the Maasai people. It is the best spot to see wild animals such as lions, leopards, cheetahs, elephants, rhinos, cape buffalos, giraffes, and zebras. Along with these, you will feel amazed by seeing the other mammals and birds.

To make your trip memorable, you should visit Lake Nakuru and Lake Naivasha. Lake Nakuru is diverse from Maasai Mara in its landscapes and wildlife. Here you can see Rothschild Giraffe, Flamingo birds, and Pelicans. The freshwater lake Naivasha is an attraction center for plenty of birds. It is a food shelter for residents and migratory birds. The key attraction of this place is the mighty fish eagle. The wildebeest migration in Masai Mara takes place from August to October.

Kenya’s topography and climate are reflected in its vegetation and animal life. The dense rainforest, swamps, extensive plains, mountain ranges, highlands, and other similar terrains act as natural habitats for various animals and birds.

The savannahs dotted with baobab and thorn trees provide classic African scenery. In the plains reside wildlife such as gazelles, zebras, wildebeest, and other hoofed animals. It is in Kenya where the Big Five African animals – lion, leopard, elephant, buffalo, and the endangered rhinoceros can be seen.

There are more than 1000 species of dynamic avifauna. These include migratory and endemic that are spotted in various regions of the country. Kenyan coastal towns and ports boast a rich culture and relaxing beaches.

Kenya has various wilderness areas which tourists can explore. The country has protected areas, national parks, conservancies, and reserves among many others. They support an extraordinary range of wildlife, perfect for an African safari.

One of the exclusive places to spot the best of Kenyan wildlife is in Maasai Mara. It calls travelers from every corner of the world to plan for an ideal Kenya migration safari. The wildebeest migration is a once-in-a-lifetime event that takes place in the Mara.

Masai Mara is a large national game reserve, measuring approximately 1,510 km2. It is named after the ancestral inhabitants of that area, the Maasai people. The word Mara means ‘spotted’ in the local Maasai language, referring to the short bushy trees which cover the landscape.

The reserve is one of the major wildlife conservation and wilderness area on the African continent. It is world-renowned for its healthy population of lions, cheetah, leopards, and the African bush elephant. During a Kenya migration safari, travelers can also have the opportunity to come across the rare species of the park. These include black rhinos, serval, and wild dogs.

The popular BBC television show titled ‘Big Cat Diary' was filmed in this reserve and followed the lives of the big cats of Mara. A naturalist and a photographer’s haven, Masai Mara mesmerizes anyone. Whether you visit for the first or the tenth time, the reserve surprises you with its splendid sceneries, abundant wildlife, and rich local culture.

One of the highlights of the Mara however is the great migration. Masai Mara is responsible for holding the incredible wildebeest migration every year.

The wildebeest migration appears straight out of a movie but is absolutely real in all sense. This magnificent migration includes more than 1.5 million wildebeests joined by zebras, gazelles, impalas, and other plain animals. Together, they constantly travel between the Serengeti-Mara Ecosystem.

Masai Mara borders Serengeti in Tanzania. The animals begin their long, enduring journey from Serengeti, crossing various regions along the way. At the end of the year, they enter the Mara.

The expedition is not void of obstacles, most of them life-threatening. Crossing the crocodile-infested rivers and falling prey to hungry predators are the major challenges the animals face during the journey.

The migration occurs for a simple reason – pasture and water. Wherever there is the availability of nutritious grass and abundant water, the wildebeest head there. However, there is no solid evidence to suggest how the wildebeest plan their routes. Although some experts do believe that wildebeest follow the weather and climate in general.

The animals spend several months grazing and trekking the bountiful plains of the Mara. In comparison to Serengeti, Masai Mara is a much bigger reserve. As a result, a Kenya migration safari becomes much more prominent. Moreover, the dramatic river crossings are best seen in the mara.

The movement of migration is almost unpredictable and relies mostly on the climate. To provide a general overview, this timeline roughly explains how the wildebeest move. According to this, travelers can plan their Kenya migration safari.

Herds of wildebeest and other animals are typically spotted near Southern Serengeti. These months also mark the calving season. More than 100,000 calves are born every day. Unfortunately, these vulnerable newborn calves are not overlooked by predators. Dramatic chasings and kills are often seen during this season.

Adult as well as newborn wildebeest drift towards fresh grass near Central Serengeti. They are joined by thousands of zebras and antelopes. By May, wildebeest begin their mating season. The migration picks up pace and heads to Serengeti’s western corridor. The long rains occurring in May create heaving flooding and, at times, the migration becomes harder to spot.

The dry season occurs in June and large herds of animals prepare to pass a tough obstacle. They have to cross over the Grumeti River which is filled with hungry crocodiles. Many of the wildebeest lose their lives while trying to make it across alive.

Those who survive head north but another river crossing awaits them. This time it is the Mara River which has even deadlier Nile crocodiles. Wildebeest herds may hold back for hours or even days to cross the river. Crocodiles lie in wait to snatch up slower and vulnerable wildebeest and zebras.

Moreover, other predators waiting near the river bank such as lions and leopards always anticipate to ambush their prey. Crossings are major highlights of a Kenya migration safari as it appears like a film rolling in real-time.

However, the crossings are dependent solely on the timings of nature. Since they are not fixed, river crossing can be unpredictable.

Those herds who successfully survive, enter the beautiful Masai Mara. Mega herds of wildebeest, zebras, impalas, and other animals are seen sprawled in the reserve. They are attracted to Mara’s lush and abundant grass which offers ample grazing opportunities.

During these months, Masai Mara is filled with wildebeest, covering almost every inch of the reserve. During your Kenya migration safari, it is not unusual to spot these animals standing extremely close to safari vehicles.

One of the best ways to experience a luxury Kenyan migration safari is to stay in Mara’s private conservancies. They remain less crowded and provide relaxing game drives. Moreover, travelers can opt for other activities such as taking a hot air balloon ride. Watching wildebeest from the eagle’s eye while soaring up in the sky is an unforgettable sight.

When short rains begin, wildebeest begin to head back to Serengeti. They begin their calving season, ready to start their annual journey all over again.

When to plan your Great Migration Tours

The wildebeest migration is best seen in the Masai Mara as the route is much more concentrated. Furthermore, the reserve is accessible as travelers can fly straight from Nairobi, Kenya’s capital city, and reach the Mara.

The wealth of wildlife found in the reserve adds to your Kenya safari migration as well. Not only will you have sightings of wildebeest but also the big five and diverse species of birds.

The best months to visit Masai Mara for an ideal Kenya migration safari is from July to October. During this time of year, the Mara is filled with epic scenes of the annual trek. One can also catch the popular river crossings during this period. Mara River crossings take travelers through a range of emotions on site.

These months also remain dry, which means less vegetation opens up possibilities for excellent game viewing. Due to the dry season, various wildlife species gather near watering holes to quench their thirst. Many accommodation choices including mobile camping situated inside the reserve, are based near such watering holes to provide exclusive sightings of animals. It is also the best time to enjoy the great migration by opting for a classic Kenya migration safari.

How to Enhance Your Kenya Migration Safari Further

Combined Kenya and Tanzania's great migration tours are popular and allow travelers to witness the flora and fauna of both countries. In Tanzania, guests can enjoy a thrilling Tanzania safari to the Ngorongoro crater and the Ndutu region.

Moreover, Serengeti National Park always offers exciting game drives. Lesser-known destinations like Lake Manyara is a key habitat for thousands of pink flamingos gathering on its shores along with other bird species.

Kenya migration safari is not only limited to bush experiences. Kenyan coastlines are famed worldwide. After finishing up game drives, it is not unusual to relax and spend time near the white sand beaches and swim in Kenya’s pristine waters. Diani, Nyali, Lamu, Watamu, and Bamburi are just some of the beaches offering luxury and peace. Moreover, travelers can embark on boat rides and try numerous water activities to see Kenya’s marine life.

A Kenya migration safari is an exclusive vacation fit for all types of travelers. To look into more great migration tours, contact Wild Voyager today. It is never too late to plan your perfect and dreamy Kenya safari!